A new survey demonstrates that Palestinians teens across the world (including in Israel and the occupied territories) have strong ties to their national identity, despite the fact that most of them have never set foot in their homeland. 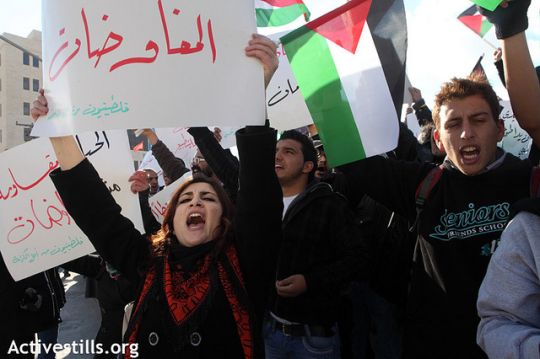 Palestinians protest against negotiations between the PLO and Israel in January of 2012. (photo: flickr/Activestills)

In Israel’s process of colonizing Palestine, the indigenous population has been divided into three main categories: Palestinians living in the occupied Palestinian territory; Palestinians residing on the Israeli side of the 1949 Armistice Line; and the millions living in forced exile. The map of Palestine depicts the classic colonial principle of ‘divide and rule’ – political and social divisions based on fragmented geography.

The 1948 Nakba was the central fissure that tore apart the social fabric of Palestinian society by cutting off relationships between Palestinians on either side of the Green Line. Israel has maintained this strategy since. Most importantly, Israel erased the term ‘Palestinian’ and for instance labels the Palestinian citizens of Israel as ‘Israeli-Arabs’ in order to disconnect them from their own history and ownership of the land, and to reinforce their position as sub-citizens within Israeli society. Israel went even a step further by compartmentalizing that community into Arab Christians, Arab Muslims, Druze and Bedouins. Fragmentation was applied to the territory occupied in 1967 by categorizing the population according to identity cards that restrict life and movement within the West Bank, East Jerusalem and the Gaza Strip.

In enforcement of the ongoing displacement since the Nakba, Israel marked Palestinian refugees who attempted to return as ‘infiltrators’ and deported them at sight.[2] In whole, Palestinian society was partitioned into categories and sub-categories with corresponding political and legal limitations for each group.[3] According to David Ben-Gurion, Israel’s first prime minister, the ultimate aim was to weaken and eventually erase Palestinian affiliation or belonging to their heritage and land in order to “do everything to ensure they [the Palestinian refugees] never do return.”[4] His reasoning was that in time – based on Israel’s policies towards the Palestinians, “[t]he old will die and the young will forget.”[5]

But Ben-Gurion’s vision did not materialize. On the contrary, despite all Israeli efforts to divide and erase Palestinian society, the Palestinian people have not abandoned their rights and continue to steadfastly confront Israel’s expulsion policies. BADIL’s 2012 Survey of Palestinian Youth focusing on identity and social ties clearly indicates that the third and fourth generation of Palestinian refugees did not “forget” their attachment to Palestine. The survey was conducted in the seven areas where the majority of Palestinians reside: Israel, the West Bank, the Gaza Strip, East Jerusalem, Jordan, Syria and Lebanon. It was conducted among Palestinian youth aged between 15 and 19 years and examines two main issues: that of self-identification (identity) and the importance of social ties compared among Palestinian communities living in the seven geographical areas.

The survey’s findings demonstrate that the vast majority of the respondents consider themselves Palestinians. Between 55 to 70 percent of the respondents in Jordan, Syria and Lebanon regard themselves as Palestinians. The significance of this majority can only be understood bearing in mind that these communities were born in forced exile and have never set foot in Palestine – denied by Israel. Even though living under the most direct Israeli colonial and ideological rule for the past 65 years, 45 percent of Palestinian citizens of Israel regard themselves as Palestinians and only 12 percent as ‘Israeli-Arabs’ as categorized and propagandized by the Israeli state for the past 65 years.[6]

On the question of social ties, the majority of Palestinian respondents from all seven geographical areas expressed the opinion that it is either “important” or “very important” to establish and foster social ties with other Palestinian communities. The research results depict patterns of unified Palestinian identity and fate in spite of Israel’s attempts to irreparably damage the social fabric through geopolitical fragmentation. Furthermore, the survey demonstrates that Palestinian youth in separated geographies hold similar viewpoints to identity and national community. Importantly, the survey “affirms that the question of Palestinian national identity is not merely a question of citizenship, travel documents or privileges, but a much wider concept concerning the key principles of liberation, freedom and [self-determination].”[7]

These principles are common to the various Palestinian communities and, thus, should be reflected by the Palestinian leadership and international community when confronting the Palestinian reality of apartheid, military occupation and colonization. A long-lasting and just solution to the conflict can only be found when taking into consideration the Palestinian people as a whole and, most importantly, by emphasizing the millions of Palestinian refugees’ inalienable right of return.

A version of this article originally appeared in “Towards a Prognosis: Diagnosing Fragmentation and Problems of Representation in Palestinian Politics“, the Spring 2013 issue of al-Majdal published by the BADIL Resource Center for Palestinian Residency and Refugee Rights. Follow BADIL on Facebook and Twitter.