facebook twitter email link
The winds of change blowing across the Mideast appeared to have reached the Jewish State yesterday, as hundreds of politicians and public servants took to the streets of Jerusalem to demand the removal of State Comptroller Micha Lindenstrauss from office.

The group of protesters, led by General Yoav Galant, chanted slogans against the Comptroller’s never-ending interference in their daily lives, in what they coined as an attempt by the former district judge to “screw them over”.

“He’s not a State Comptroller, he’s a State Controller!”, and “Lindenstrauss, c’mon gimme a break, I’m dyin’ out here!” were just a few of the harsh words hurled at the man who declared war on corruption.

Galant, poised to become the next IDF Chief of Staff, took to the podium first. “All I did was plant a few olive trees on my neighbor’s lawn – and now this guy, this Lindenstrauss, is ruining my chances to lead the most moral army in the world! I think we should —”

At this point, Ehud Barak grabbed the microphone from Galant, as is his custom when the Defense Minister sees a podium and someone else speaking on it. “Lindenstrauss won’t leave me alone!”, Barak screamed. “I took my wife Nili to Paris, I wanted to treat her to a nice hotel, and this guy claims I shouldn’t have spent 20,000 shekels of tax payers money a night on that? After all I’ve done? I’ve killed more Palestinians than any other prime minister in history! And this is the thanks I get?”

“See? I told you!”, Interior Minister Eli Yishai said in an emotional plea to the protesters. “I told you Lindenstrauss would take over the country! I’ve been telling you for years! In the Knesset plenum, in the committees. But no one listens to me. Just like I’ve been saying for years the firemen need more money. Years! And when the Carmel burns, who does he blame? Of course – the Sephardi minister! We have to —”

“This man is dangerous!”, Barak yelled as he grabbed the microphone from Yishai.

Former Knesset Speaker Dalia Itzik, investigated by Lindenstrauss but eventually cleared, decided to attend the demo because of the damage her name suffered. “First he looks at my hotel nights, then he checks how I pay for my apartment renovations. What’s next? My shopping spree in the mall? The man has too much power, we —”

“Stop Lindenstrauss now!”, Barak yelled into the microphone as Itzik was still holding it.

Next up was Yohanan Danino, poised to be the next Police Chief. “Everything was going great for me. And then, the minute they tell me I get the job – bam! – he says he wants to investigate how I might have been responsible for the death of two undercover agents. I mean, Jesus, talk about timing! What else needs to happen here before –”

“And did you see what he did to Nili and her company Taurus?” Barak said as he snatched the microphone from Danino. “Did you see? My poor Nili, she just wanted to start a business, get some influential people together. But no, he had to make sure, this Lindenstrauss, that the money wasn’t going to any future campaign or anything. That’s the thanks I get? That!? For burying the Labor party? That’s what I get?”

Last to take the stage was former Prime Minister Ehud Olmert. Before he began to speak, Barak tried one last time to snatch the microphone, but Olmert saw him coming. “Sit down Ehud! Jesus, what is UP with you?

“Anyway, we’re all gathered here for a good cause. We all know what Micha did to me. All the claims about political appointments, the selling of Bank Leumi, my real estate deals, the Second Lebanon War. I think you’ll agree that out of everyone here, I got hit the hardest”.

The crowd muttered in agreement. “So, I just want to say one thing to Mr. Lindenstrauss”, and suddenly the tears started to pour down his face. “One thing, and that’s it: Screw you!”, he yelled between huge sobs, his voice breaking, “screw yoo-hoo-hoooo aaaahhhh”, and as Galant came to comfort him he collapsed in his embrace, getting his uniform all wet.

Barak saw the opportunity and took the mike from Olmert. “Yeah, screw you Micha! OK guys, let’s go to my place. He can’t touch us up there, way too high”, after which the police dispersed the crowd with American made tear gas. 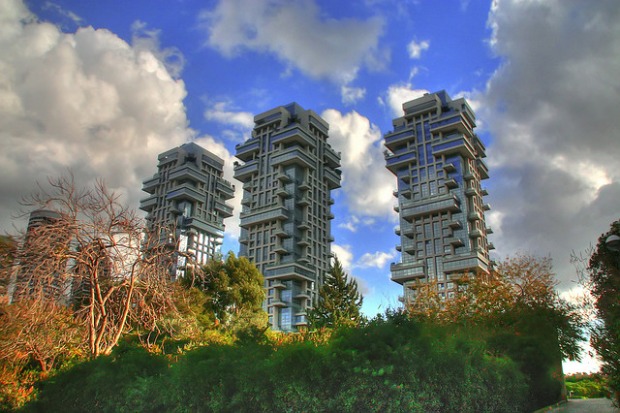