Spending the Sukkot holiday on a Palestinian farm highlights the stark contrast between a holiday in which Jews celebrate in temporary structures, and a reality in which Palestinians are forced into an existence of impermanence and military demolition orders scattered across hilltops. 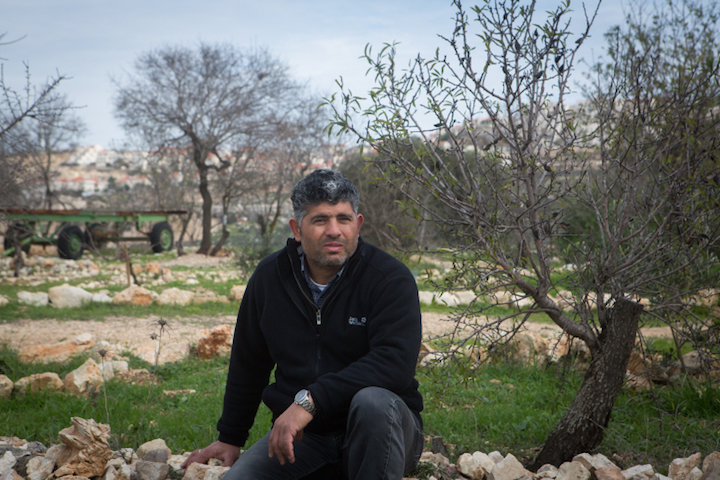 Daoud Nassar, the director of Tent of Nations, sits among olive trees on his family’s land, West Bank. (File photo by Miriam Alster/Flash90)

Daoud Nassar carries 54 keys on his belt loop, in rotation. His sprawling family property, on the last Palestinian hilltop in the middle of the Gush Etzion settlements, is dotted with tented structures, caves, and gated areas, all fastened with a lock. As the family orients me on the property for a long weekend of volunteer work, they remind me to lock each time I exit the kitchen, or anywhere else for that matter. They say it’s to keep out mice and stray dogs.

Locking has become a sort of ritual and mentality at the Tent of Nations. It’s about dogs and mice, but it’s also about ensuring ownership and security — two things this Palestinian family sorely lacks.

From farm to tent

The Nassar family purchased the land exactly 100 years ago, just before the fall of the Ottoman Empire. They subsequently registered the land with British Mandate authorities. Despite ample documentation, however, in 1991 the Israeli army declared the area “state land” and the family has been embroiled in an expensive legal battle ever since. Daoud tells volunteers to look out for Israeli army demolition orders scattered across their 100 acres. Often times, the family won’t even know they’ve received a new order.

The Tent of Nations project started in 2001. The family was searching for solidarity and help with manual labor on their vast agricultural land. But just as important, they realized that just having internationals consistently sleeping in one of their 20-person tents helped the family establish and maintain their presence on the land, especially now that some of them live in Bethlehem most of the time. Since 2002, there has been no harassment from surrounding settlements.

Historically, the Nassar family lived in an underground cave near the property’s current main structure stands. Today, they use caves as a loophole to escape the demolition orders above ground. Although some of their unique lifestyle is desired and traditional, the “impermanent” structures on the land are more complicated. They are a testament to the limbo of permanent impermanence into which the Israeli government has forced them through demolition orders and intimidation. 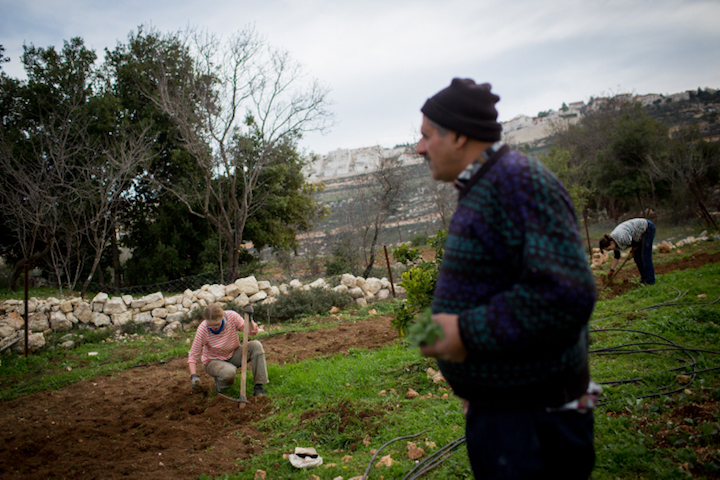 Daher Nassar speaks with foreign volunteers who have come to work at Tent of Nations. The Israeli settlement of Neve Daniel is seen in the background. (File photo by Miriam Alster/Flash90)

I head to Tent of Nations from Jerusalem on a Friday morning. The city of Jerusalem is temporarily stacked with its own impermanent structures — sukkot — lining the stone apartments of Nachlaot. I wonder whether Tent of Nations is a more appropriate place to be celebrating this holiday, despite Jerusalem’s renown for the holiday of Sukkot.

Upon moving to Jerusalem a few years ago, the ramshackle huts popping up in the streets once a year struck me as quaint; a nice excuse for city-folk to sit under the stars and eat good food with their families. It seemed nice. Upon arriving in the heart of Gush Etzion, I saw a more sinister backdrop to the impermanent structures at the Tent of Nations.

It is easy for us Jews to celebrate a nostalgic holiday of booths to commemorate our wandering in the desert — now that we are done wandering. It’s much more difficult for Palestinians to celebrate such a holiday while living a life of forced impermanence, without the security of land ownership or the protection of a state.

On the day between Shabbat and Shemini Atzeret/Simchat Torah, two holidays that forbid work, I awake to the sounds of bulldozers clanging in an aggressive exchange across the hilltop. The Israeli settlement of Neve Daniel was celebrating Sukkot while confidently building a new yeshiva. It’s safe to say they’ve never had to scour the land for demolition orders.

The meaning of rain when you have no water 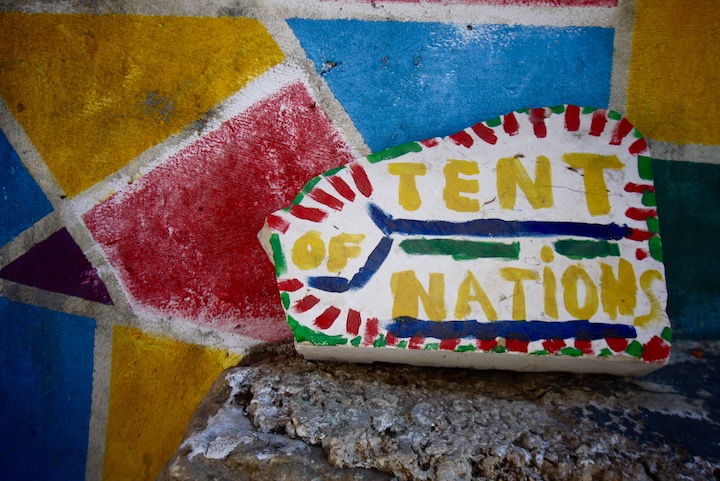 Despite the backdrop of disparity and inequality, the Nassar family display a point of being celebratory and resourceful. On my first visit a couple years back, the family proudly showed us their caves and structures while stressing the importance of improving their own society rather than falling into a victim mentality. I guess the joy was infectious because here I was, years later, celebrating the olive harvest with them.

As the volunteers arrive for the beginning of the harvest, Daoud’s older brother Daher dons a nice purple button down shirt, his thinning hair slicked back a bit. “First time in Palestine?” he asks each newcomer with a toothy grin. We longer-stay volunteers have been working diligently in preparation for this first harvest day, clearing circles around olive trees throughout the property. At Daher’s bidding, a large Austrian group overtakes the hill and begins picking olives and plopping them into small plastic cups, too impatient for us to bring them buckets.

It becomes clear that the Nassar family has grown a bit impatient about the harvest. Olives are supposed to be harvested after the first rain – but that rain never came. Since the family is cut off from basic infrastructure and resources that Israeli citizens in the adjacent settlements receive, including water, they must either buy water or collect rainfall. Thirsty for the rain, the trees had begun to give up; hard, shriveled olives have been falling to the ground for weeks. In the days before the harvest, volunteers were told to rescue minimally soft olives from the ground in hopes of salvaging some oil from them. Over lunch or dinner, Daher and Daoud would mutter from time to time about the rain, “It should be here by now.”

On Shemini Atzeret, my last day at Tent of Nations this time around, and the day that Jews traditionally say a special prayer for rain, I open my weather app. “Look Daher!” I show him the little blue cartoon raindrops next to Friday. He starts eagerly counting on his fingers the days from Monday to Friday. He seems satisfied.

In years past, when winter arrived in Jerusalem I would curse the rain, even from the inside of my sealed stone apartment. This year, I’ll be thinking of Daher, smiling.