UPDATE: The Israel High Court announced today (Monday) that it is moving the hearing up to tomorrow (Tuesday) at 3:00pm local time, instead of initial date this Thursday. The Court did not provide reasons for its decision, but there have been assessments in recent days that there is a concrete threat to the prisoner’s life.

This post, criticizing the court for the initial delay, was originally posted yesterday (Sunday)

Khader Adnan has now entered his 65th day of a hunger strike. On Sunday the High Court of Justice (HCJ) decided to postpone dealing with the urgent appeal in his case until Thursday. Physicians for Human Rights – Israel, which supports the appeal, noted that would be Adnan’s 68th day of his hunger strike, and there is no guarantee that the justices will bother to make their decision then. It’s a Thursday, you know, and the weekend is so close, and this is just a Palestinian in administrative detention, and he must be held for a reason. Irrecoverable dying begins on the 70th day of a hunger strike. That would be Friday.

Now, the HCJ knows, when it wants to, how to hold swift hearings. Before the evacuation of the settler outpost Amona, it held a marathon debate till morning before making its final decision. But that was an illegal outpost, built on private Palestinian land; the debate was on something important, such as the theft rights of settlers. Not something petty like the most essential rights of a non-Jew.

People tell me: Adnan can stop his hunger strike whenever he wants. This is very true. He can also solve most of his other problems and simply sign whatever his interrogators want him to sign. He just has to lie to himself. Whoever makes that claim has no clue as to what human dignity is, the basic right to not have a jackboot at your throat; or, perhaps, he thinks Palestinians denuded of human dignity.

Adnan’s detention serves no practical purpose. He is not interrogated as he lies chained in a hospital. Even were the security apparatus to discharge him now, he would not be a danger to anyone anytime soon. He has already suffered severe damage. There is no reason to keep him detained, but one: his release will embarrass the apparatus. It will testify that there was no cogent reason to hold him in the first place. It will put the entire system of administrative detention in question.

So what we basically see is a pissing contest between a dark apparatus, the strongest in Israel and quite likely in the entire Middle East, and a sick, dying man, under guard, chained to his bed, with nothing but his faith to drive him on. The HCJ was supposed to be a bulwark of this man, to stand between him and the apparatus, and defend him. That, after all, is the legend they keep telling us about the HCJ: that it is comprised of wise, all-knowing judges, standing undaunted in defense of human rights against the government. The thin line of black robes. 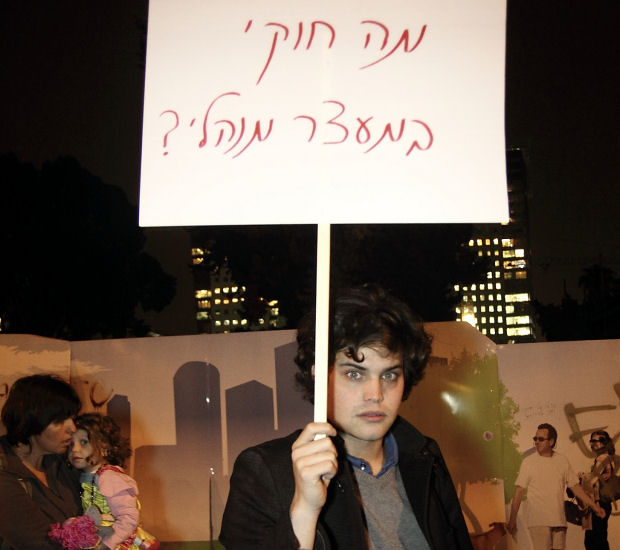 A pro-Adnan protester in Tel Aviv: 'What is legal about administrative detention?' (Photo: Yossi Gurvitz)

The court made excellent use of this legend, and used it in the political struggles of the 1990s and 2000s. Some Israelis actually received aid from him. But it never defended the Palestinian. Every Palestinian had the right to appeal to the HCJ against the demolition of his house; the court has never prevented any. Not a single one. The court approved one administrative detention after another, even though this basically took us to pre-Magna Carta law. Even when the apparatus decided to exile 400 people suspected of being Hamas members to Lebanon, the HCJ approved the decision – admittedly, it held a swift hearing on the urgent appeal of the deportees.

The justices know precisely where they sit. If they hear the petition, they will also have to make a ruling. If they reject the petition, Adnan’s blood will be on their hands, which can be quite uncomfortable the next time they visit Europe. If they accept it, on the other hand, they will face the wrath of the Israeli mob, which does not understand all the noise about some Ay-rab. So they postpone the hearing. As the old joke went, perhaps the dog will die; perhaps the baron (the apparatus) will. Perhaps someone else will deal with this hot potato for them.

And that is evil couched in cowardice. And that, too, should be borne in mind when we have our own judges’ trials.