UPDATE: On Sunday March 25, 2012 the High Court rejected the deal between the State and the settlers in Migron to delay its evacuation till November 2015. Instead they have set a deadline of August 1, 2012. The article below, posted earlier in the week, explains the status of illegal outposts and the background on Migron specifically.

There are approximately 50 outposts – essentially baby settlements – in the West Bank, all illegal according to Israeli law. Migron, established in 2002, is supposed to be dismantled by the end of March, 2012. So why isn’t that going to happen? 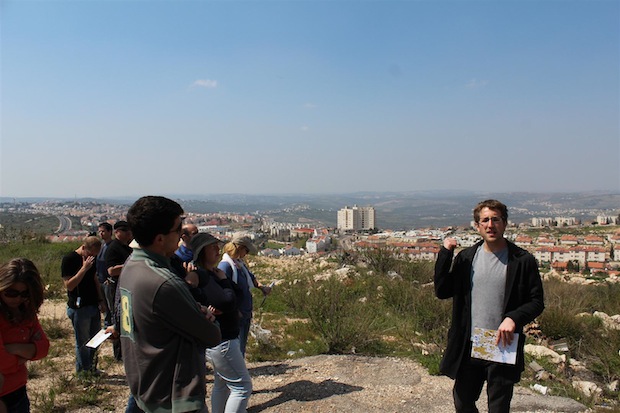 I joined a tour of the West Bank hosted by Peace Now on Friday to inform the public on the dangers of unabated settlement construction, just two days after the High Court of Justice hearing over whether to approve a government-brokered deal to relocate the illegal outpost of Migron in the West Bank.

Migron is classified as an ‘outpost,” meaning its construction is illegal under both Israeli and international law. The High Court has already ruled that Migron must be evacuated by the end of this month, however the state wants to postpone the demolition in order to move residents to a nearby settlement that will be ready in 2015.

Stopping on a hilltop south of Migron called Sh’ar Binyamin, Peace Now staffers Lior Amichai and Etai Mizrav pointed to the outpost, explaining its story and why its blatantly illegality under Israeli law is a turning point for the settlement movement.

In 2001, settlers in neighboring Kochav Yaakov complained of a lack of cellular service on the connecting road and applied for a construction permit.  “They said ‘Let’s build an antenna,’” Mizrav explained. But a cellular radio tower was merely the first step in laying the foundation for a new outpost.

“Now they said, ‘we need security for the antenna.’ And it was dangerous [at the height of the Second Intifada] to position one lone guard at the site. So let’s build temporary housing— a caravan— for the guard,” Mizrav said, “and let’s move in his family.”

The following year, settlers constructed temporary caravan housing on the hilltop. Today, nearly 50 families live on this hilltop now known as Migron— the largest outpost in the West Bank— and the IDF provides security for its residents.

The High Court has ruled that Migron is built on private Palestinian land. The Israeli military Civil Administration and the State Attorney agree that the outpost is located on land owned by Palestinians from the neighboring Deir Dibwan and Burka villages. The local Palestinians hold the title deeds— from before 1967— to the land.

In their defense, Migron residents argue that the Israeli government invested heavily in the Migron outpost, a de facto form of retroactive legalization. According to the Jerusalem Post, Migron attorney Barak Bar-Shalom said that “Israel is responsible for the situation. The state was very involved in Migron’s development, pouring millions of shekels into it, and the Housing Ministry issued permits for 500 housing units in Migron.”

Today, the State wants to postpone Migron’s evacuation deadline in order to construct a new settlement for the residents nearby on Hayekev Hill. This is explained in a Channel 10 report on the hefty price to build a new settlement.

The High Court is expected to rule on the state’s request next week but is skeptical of the state’s proposal to postpone. At the court hearing, Justice Salim Joubran asked the state attorney:

“What will the rule of law look like when ruling is not followed?…You say that the outpost in three years, but I know this type of behavior. Three years will inevitably turn into eight.”

Peace Now staffer Amichai warned that any court decision delaying Migron’s demolition could portend grave risks for Israeli sovereignty. “It’s a fight for democracy.  If Migron won’t be demolished, the consequences are horrible. It means the State cannot demolish even one outpost—it’s a statement to the settlers and they are surrendering.”

Aside from the Migron outpost, Peace Now toured a number of settlements that vary in ideological and religious composition.

Visiting the Givon access road, Amichai pointed out the Palestinian-only tunnel to four villages encircled by the separation barrier— Betunia, Beit Hanina, Al Judera and Al Jib. Palestinian residents are forced to use the underground passage due to large-scale Israeli settlement construction.

Friday’s tour also included a stopover in Ariel— a settlement of 18,000 residents located 20 kilometers inwards from the Green Line. Earlier this week, Peter Beinart mentioned Ariel in a New York Times op-ed, saying it “stretches deep into the West Bank” and lauding authors David Grossman, Amos Oz, and A.B. Yehoshua for boycotting the settlement, which the Prime Minister has called “the heart of Israel.”

Some of the members on the tour were religious settlers. One participant, Dvir— who preferred not to give his last name— is from the Gush Etzion settlement bloc. He said that he joined Peace Now’s tour “in order to hear the other side.”

During the tour, Peace Now handed out color-coded, expandable maps pinpointing the hundreds of Israeli settlements that dot the West Bank landscape. According to Peace Now, approximately 310,000 settlers live in the territories (if you include East Jerusalem, the number soars to 650,000 residents— nearly 10 percent of the Israeli populace).

Around 70,000 settlers live on the “wrong” side of the separation barrier, deep in the West Bank. In any possible  peace deal— tens of thousands of settlers would have to be evacuated. When asked if such a withdrawal is politically possible, Americans for Peace Now spokesperson Ori Nir sounded optimistic.

“Bricks and mortar are the most difficult to quantify,” Nir said. “If there’s a strong Prime Minister who has sold the deal, more settlements will not break it.”

Nir added that there are two points of “irreversibility:” the changing demographic reality and a lack of “swappable” land. The two constituencies most opposed to a peace deal, he added, are the ones growing the fastest: the ultra-Orthodox and national religious sectors.