Urban Outfitters, as my brilliant sister very articulately put it, is a fashion emporium based on the notion that the store is really frickin’ cool. The music, the down-home furniture, the hipster wannabe salespeople are all systematically placed to make you feel that the $42 jean cut-offs you are buying are part of some underground, edgy, young stream of awesomeness.

There are many elements that contribute to the ephemeral sheen that magically powders a grey t-shirt into being an integral part of street culture in UO. One is a weird kind of nostalgia for whatever childhood memories you may have. At present, those include cassette tapes of the Clash and plastic novelty cameras. Tomorrow, who knows? Flip phones and Bjork, maybe.

Another aspect is the rebel chic energy given off by UO’s graphic department. What other store offers the opportunity to buy a shirt that says “Don’t Mess With Texas” right next to “Pugs not Drugs” on top of a stack of Biggie Smalls tops? Just about everything in the world has been either ripped on or gratuitously loved in Urban Outfitter’s t-shirt section. No one is safe.

Not even the Holocaust. 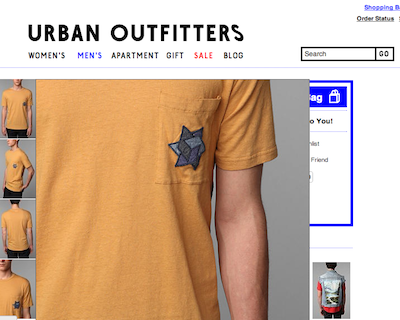 Recently, the store updated its website to include a particularly questionable garment designed by Danish label Wood Wood. The vintage yellow color wouldn’t have caused a stir on its own, but embossed with a hand-sewn Jewish star on the breast pocket, well, that turned some heads. The release of this t-shirt comes almost perfectly in time for Holocaust Remembrance Day. The website was immediately barraged with a slew of comments like: “Is this what I think it is? WTF?” and “This is mind-blowingly offensive!”

The shoppers were outraged. The newspapers got involved. Fred Dardick, of the Canada Free Press wrote:

In what can be considered yet another sign of the times that liberal ideology is elevating anti-Semitism back to mainstream acceptability once again, the international retailer Urban Outfitters is selling an item of clothing that can best be described as “Auschwitz chic.”

This isn’t the first time that Urban Outfitters has run into trouble for something it decided to smack on a t-shirt. The Navajo Nation actually took the company to court over a line of items with names like Navajo Hipster Panty and Navajo Flask. The Irish have also had their turn at bat against UO. Seamus Boyle of the Ancient Order of Hibernians in America accused UO of defaming the Irish people. The Irish case was supported by a group of Congresspeople, who wrote a letter to protest the St. Patrick’s Day paraphernalia.

Looking over these horrified customers’ responses, I can’t help thinking back to the myriad garments I’ve seen in Urban Outfitters. Years back, they were the first mainstream American store to sell keffiyehs. Hoards of hipsters jumped at the chance to wear the beautiful, ethnic accessories. Did those kids intend to make a political statement with those scarves? Did they even know that in some places those scarves are considered political? My guess is, on the whole, no.

Can we blame UO for marketing political or offensive slogans? Yes. Can we blame the idiot consumer for buying and wearing them? Yes.

Because although Urban Outfitters makes us feel like we’re rebelling against some oppressive “man” or system, the truth is that they have made a killing on mass producing a blend of trendy unconventionality. While we buy their overpriced clothes to feel special, thousands of other special folks are picking out the exact same hip uniform, making it just as banal as a pair of khakis and a white t-shirt. And the kicker here is that the yellow tee that has ruffled so many feathers costs $100.