Take a look at today’s front pages shown here. The one on the left is Yedioth Ahronoth’s, Israel’s leading tabloid. On the right is the New York Post. 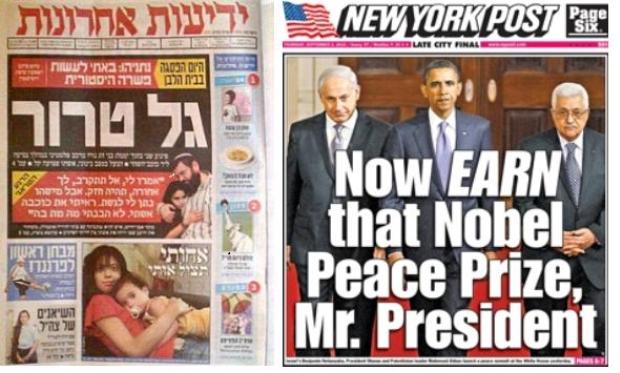 Yedioth’s top story reads “wave of terrorism,” referring to the two shooting attacks carried out by Hamas militants against settlers in the last 48 hours. On the bottom and on the right side of the page there are health, sports and other magazine stories. The only reference to the peace process is the quote in small print, on the top of the page. It reads: “Netanyahu: I came for an historic compromise.”

The place, the size and the coloring of Netanyahu’s words put his speech in its proper context. But if you get your news from the Post (and let’s hope you don’t), you might actually believe history can be made here. 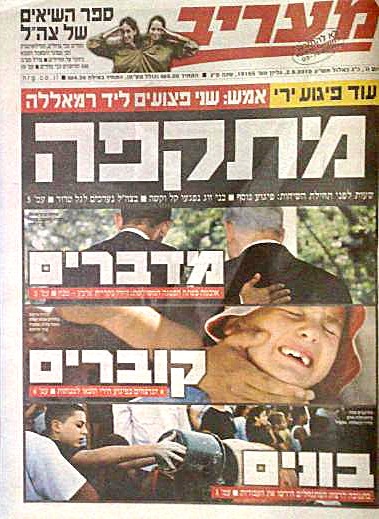 This is Maariv, another Israeli tabloid: the front page combines the story of the West Bank attacks and their aftermath, the attempts by settlers to renew construction in the territories and the diplomatic process. The talks themselves don’t get the top story, not even a central image, like they do in the New York Times, shown below. Again, the US papers seem to give the talks a greater importance than the Israeli media. Bizarre, to say the least. 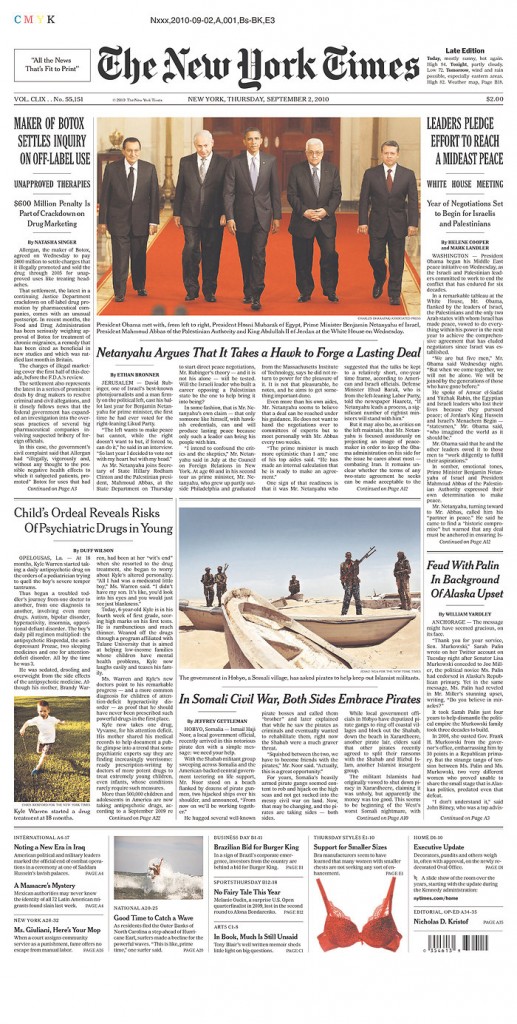 As part of a research for a story I’m working on, I recently went through the archives of Maariv and Yedioth from 1993-1994, the years the Oslo accord was negotiated and signed. Entire papers, not just the front pages, dealt with the talks. The same goes for the days of the Camp David summit in 2000. Today on the other hand, nobody in the Middle East really cares about the diplomatic process, and I actually wonder how many even know we might be “one year from a final agreement,” as the White House puts it.

UPDATE: The Israeli media finally joined the party. Friday’s top story is the summit in Washington, though most pundits remain very skeptic regarding the chances that the talks will have a meaningful result.

It’s easy to tell when things get serious. The settlers make a good litmus test for the intentions of the Israeli leadership. They have good ties with the Israeli administration and army. When the settlers sense danger, they let it show. And while they went after Sharon and Rabin with everything they got, they are awfully quiet now. There wasn’t even a single major protest against Netanyahu, The National Religious Party is still in the government, and the right flank of the Likud has never been more silent. The Israeli tabloids – like all tabloids – reflect their society’s mood: This is clearly not a country on the verge of its most important decision in decades.

The NY Times editorial declared that with optimism and conviction, the talks might lead to an agreement and the administration asked the parties not to give in to cynicism. But the diplomatic process is not a sports competition, and pep talks can’t help when the gap between the parties is too big.

The Palestinian leadership has lost most of its credibility and legitimacy with its own people, and the bleeding gets worse with every picture of Abu Mazen shaking hands with Netanyahu. Hamas has just given us the first taste of what leaving it out of the process means. Even so, the positions of PM Fayad and President Abbas are incredibly far from those of Barak and Netanyahu. The Israeli leadership – and to be honest, the Israeli public as well – cannot give the Palestinians the minimum they can settle with. Under these circumstances, even if an agreement is reached, it won’t mean a thing.

As I’ve written before, the current stage in the conflict is not just about peace. It’s about ending the occupation and getting the Palestinians their rights. Some people in the American administration understood that, but for their own reasons, they decided to pursue the failed policies of the past two decades. I have a lot of criticism for the way the Israeli media covers the Israeli-Palestinian conflict, but this time they got it right: for now, this round of talks is a farce.

I will be working and writing from New York in the next three months.