The ‘mistaken’ killing of a 13-year-old boy by the Israeli army is a reminder that all too often, Israeli security forces use deadly force against Palestinians as a first resort. 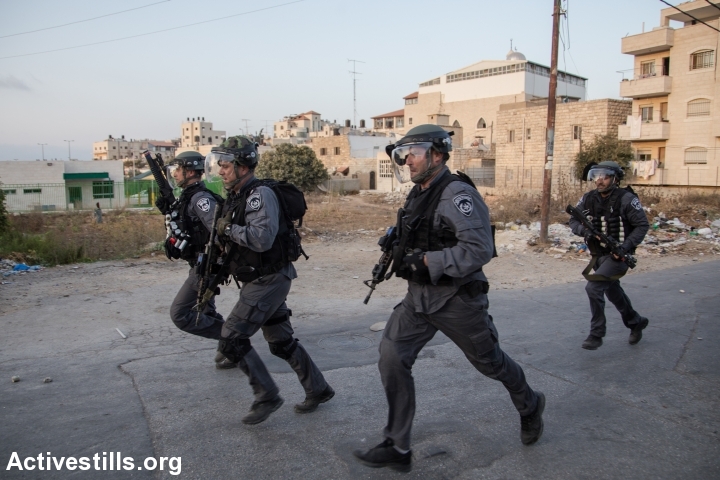 Israeli police are seen during clashes in Sh’uafat neighbourhood in Jerusalem October 5, 2015. Violence in the Israeli-occupied West Bank and Jerusalem has intensified in the past few weeks. (photo: Faiz Abu Rmeleh/Activestills.org)

The use of .22 sharpshooter rifles in Aida camp is not a new occurrence, and Abdallah was not the first 13 year old to have been shot there in recent years — mistakenly or deliberately.

The “mistaken” shooting by the sharpshooter having an off day comes as Israeli authorities are publicly stating they will start using .22 rifles and sharpshooters within its borders, and not only in the West Bank as has been the case for the better part of 15 years.

Fifteen years ago, Israeli police killed 13 unarmed Arab protesters in northern Israel, many by using sharpshooters, in what came to be known as the events of October 2000. Israeli police had since stopped using live ammunition against protests inside the Green Line.

In the West Bank as well, Israeli military forces greatly restricted the use of .22 Ruger rifles in 2001 after an internal army report stated that the smaller caliber bullets must be used according to the same rules of engagement as all other types of live ammunition. They could not, as had previously been the case, be used as a form of crowd control. As a result of the internal report, use of the .22 Ruger rifles was suspended until 2008.

In response to a spate of stone-throwing incidents in East Jerusalem and the West Bank, Benjamin Netanyahu set into motion a process resulting in Israeli police preparing to use live ammunition — .22 Rugers —against stone throwers. The new regulations were expected to be implemented in East Jerusalem and in the Negev desert against Bedouin citizens of Israel.

Arab stone throwers, that is. In a number of Israeli settler attacks against Palestinian vehicles and farmers in recent days, often times in full sight of Israeli security forces, there have been no reports of soldiers or police using deadly force to stop them.

But back to 13-year-old Abed al-Rahman Abdallah. If a military sharpshooter hit the wrong person, and shot him in the wrong part of the body, there are some important lessons to be drawn. Firstly, that using deadly force kills people — sometimes the wrong people, like 13-year-old Abed. Secondly, it’s often not used as a last resort.

A disturbing video has been circulating the Israeli and Palestinian social networks in recent days showing Israeli police shooting dead a Palestinian man who police say had just stabbed a Jewish teenager in Jerusalem. In the video, which does not show the stabbing, the Palestinian man appears to be running away with no weapon in his hands and not close enough to anybody to pose an immediate threat to anybody’s life.

Could he have been arrested without shooting? Could officers have shot him in the legs instead of the chest? Could police have used less-lethal means to subdue him, like a taser or pepper spray? The consensus on Palestinian social networks was that the Fadi Samir Alloun, himself a teenager, was executed in cold blood. And even a skeptic would ask himself, regardless of whether deadly force may or may not have ultimately been necessary, whether non-lethal means of stopping Alloun should have been tried before resorting to deadly force.

All too often we see cases where Israeli security forces use deadly force against Palestinians — on both sides of the Green Line — not as a last resort, but as a first resort. In fact, since Saturday nearly 50 Palestinian demonstrators have been shot with live ammunition. That is a huge problem, both because it seems to be killing only Arabs and not Jews, but also because police make mistakes. When that mistake involves a bullet to the heart, there is no fixing it.

B’Tselem, which has been one of the most vocal opponents of the use of .22 ammunition against demonstrators and stone throwers, put out a statement Tuesday regarding the killing of 13-year-old Abed:

“If the sniper’s version of yesterday’s events is indeed correct, namely – that despite being armed with a weapon with telescopic sights and firing in broad daylight, he missed the mark and inadvertently hit a 13-year-old boy, the incidents merely serves to underscore even further the danger this weapon poses,” the human rights organization wrote.

“The indisputable facts are that we are dealing with a lethal weapon, which the Israeli authorities falsely present as a reasonable tool to employ in dealing with demonstrations,” B’Tselem’s statement continued.