In response to the Reykjavik City Council’s — since reversed — decision to boycott Israeli goods until the occupation is ended, Israeli politician Yair Lapid wrote an open letter to the Icelandic people titled ‘The Hypocrisy of Boycott.’ In his oped, Lapid argued that Israel should not be boycotted because doing so would harm its Arab citizens. One of those citizens responds. 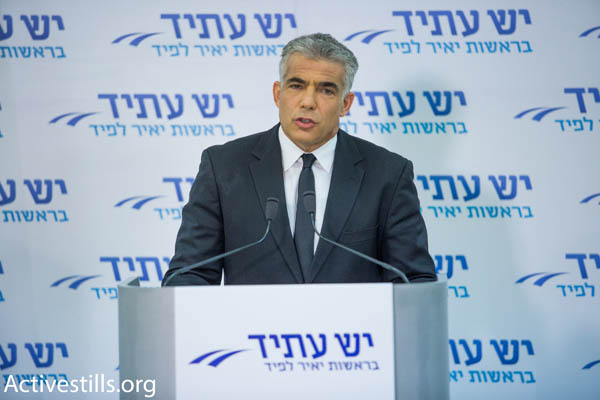 What is Israeli to you?[1] Actually, no need to answer. The time has come for you to hear what Israeli is to me. So what is Israeli to me? You are. I am referring to the hypocrisy and condescension that accompanies every step you take. What else is Israeli to me? The herd of racists following you, unable to see that the emperor has no clothes, no ideas of substance and nothing of the “new discourse” you claim to have brought into Israel politics.

You begin your article against the boycott, which you published in Iceland after the Reykjavik City Council decided to boycott products from Israel, with an impressive sequence of questions regarding Palestinians living in Israel. “Does the boycott include products made by Israel’s Arab minority which is 20 percent of the population? Does the boycott include the 14 Arab Israeli parliamentarians who sit beside me in Israel’s parliament?” You ask these questions as if you were the champion of protecting our rights. I am baffled as to the source of your insolence and audacity.

Aren’t you ashamed? You embarrass yourself with your cynical use of Israel’s Palestinian citizens as a human shield against the boycott.

What have you ever done for us, Palestinian citizens of Israel? As finance minister you tried to lower housing prices in a populist move by slashing VAT to zero — but only for military veterans. And what about those who did not serve in the army — i.e., Arabs? In their case, you wanted the law to apply only when purchasing an apartment under NIS 600,000 ($150,000). That means you wanted to encourage Arabs to continue living in poverty stricken neighborhoods. As far as you are concerned, if there is no loyalty[2], there should be no reasonably priced housing for Arabs.

What plans have you or your party promoted for the well being of those [Palestinian] residents behind whom you are now trying to hide? You mention in your article the products produced by Arab citizens, as if we were a real factor in the Israeli economy. Meanwhile, the Ashkenazi elite to which you belong does all it can to prevent Arab communities from establishing and developing industrial zones, thus preventing them from achieving economic autonomy and keeping them poor and dependent on favors from the likes of you.

Don’t run away, as you would say. I have more questions.

And how dare you exploit the Palestinian members of Knesset? You choose to ignore the fact that MKs from the Joint List do support a boycott of Israel, as do many of the 20 percent, including myself, whose economic security and well-being you are so concerned about. Just to remind you, you stated quite clearly that under no circumstances would you sit in the same governing coalition with the Arabs, thus treating them all as one uniform group, in a racist move. As if they were dying to sit with you in an oppressive Zionist government. I believe the precise term you coined for them is “The Zoabis“, right?

Let me tell you a little secret. As a child I used to read your weekly column in Maariv with great pleasure. But that didn’t last very long because pretty soon I figured out the tricks of your populist writing. The pinnacle, for me, was when I realized that you were using the Holocaust discourse to make the occupation kosher.

I would like to believe that in your article addressing the people of Iceland you did not mention the Holocaust because you are tired of tarnishing the memory of its victims. But we both know the reason you left it out is simply because you’ve found another human shield to wield, and a more suitable one in this case.

Apart from hiding behind our backs like a coward, you also touted Israel’s accomplishments, which according to you have a positive impact on the whole world. But let’s say a few words about what you didn’t write, Yair.

Interestingly, you do not mention the Israeli arms industry. Aren’t you proud of this homegrown industry’s involvement in every bloody conflict on the face of the earth, almost always by supporting and selling arms to the more aggressive and violent side? Does the fact that Israel is involved in the death of innocent women and children in any conflict not suffice for it to be boycotted? Aren’t you proud of how this industry uses us Palestinians, who “are not interested in peace,” as a lab for testing its innovative new weapons?

You also forgot to tell the people of Iceland about the house demolitions and land expropriation that targets us Arabs, on both sides of the Green Line, so that you can have neighborhoods in which we will never be able to reside, and factories in which we will only be able to work as laborers, not as managers. And instead of confusing the poor people of Iceland with stats and figures, you could have simply mentioned the fact that Israel kills a Palestinian minor every three days. You forgot to talk about the checkpoints, the arrests, the raids, and you also failed to mention the Dawabsha family from Duma, burned alive. Here too, the details are too great to list.

Yair, I have no expectations from you — not due to political disagreement but simply because there is nothing to you. The sad thing about this whole story is the unbearable number of Israelis buying your slogans, which you wrap in kitsch and in baseless assertions.

And to be honest, it’s good to have people like you campaigning against the boycott. It will only do good things for the BDS movement.

[1] This question was often posed by Lapid as a journailst to his interviewees.

[2] “There is no citizenship without loyalty” – a popular slogan put forward by Yisrael Beitenu leader Avigdor Liberman.