Head of the Joint List shares his vision of a shared, equal future for Jews and Arabs in Israel. But is it a vision left-wing Israelis and liberal American Jews can sign onto? 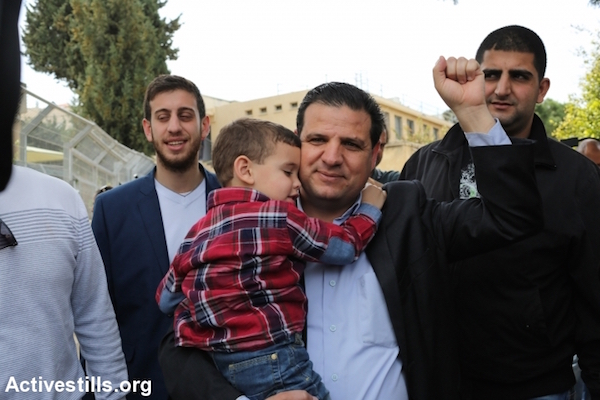 Ayman Odeh, the head of the Joint List, gave his maiden speech in Knesset this week. Odeh, a 40 year-old lawyer from Haifa, heads a list of parties representing Palestinian nationalists, Baathists, Islamists, and Jewish and Arab socialists.

He led this unlikely group to win 13 seats in the March election, making it the third-largest party in the Knesset — after the Likud and the Zionist Union. Odeh attracted attention both in Israel and around the Arab Middle East by sticking to his platform of universal human and civil rights, and for equality for all citizens of Israel.

His maiden speech, which is subtitled in the video embedded below, is a Middle Eastern version of “I Have a Dream.” Here is the first section, taken from the text, translated by Sol Salbe

Mr. Speaker, distinguished Knesset, the year is 2025, the 10-year plan to combat racism and inequality has borne fruit. Hundreds of thousands Arab employees have been integrated into the private sector, the high-tech economy and the public service.

The social gaps between Arab and Jewish citizens have been reduced remarkably and the economy has been prosperous for the benefit of all residents.

Jews are learning Arabic, Arabs are diligently honing their Hebrew skills. Jewish and Arab students are being introduced to the great thinkers and philosophers of both peoples.

Stumbling occasionally, perhaps from nerves, as he read his speech in Hebrew, Odeh describes his vision of a place that allows both Arabs and Jews to realize their national identities, but neither at the expense of the other. It is a mature vision — one that asserts inalienable rights without apology, while calling for acceptance and compassion from and for everyone.

He describes his own political  journey, from a Palestinian nationalist and activist who was once interrogated by the Shin Bet to a man who seeks to realize his identity as a Palestinian, without apology, in the state of Israel.

Implicitly, he is describing the emergence of the assertive and self confident third generation of Palestinian citizens of Israel. The first generation lived under military rule; the second was afraid and kept its head down; and the third is ready to take its place, unapologetically, as equals in Israeli society.

Ladies and gentlemen, Arabic is an official language. It is on Tel Aviv street signs as part and parcel of the urban environment, and lo and behold, it has not brought disaster upon any street’s residents.

Recognition of national rights does not take anything away from the rest of the citizenry. On the contrary, it enriches the space we live in. We will continue to demand to be recognized as a national group which is entitled to full civil and national equality, and we will struggle for it.

What is perhaps so remarkable about his speech is that his vision of fundamental equality between all citizens, of tolerance and compassion, is one that most Jews around the world would find inspiring if it were, say, described in a speech by an African-American man at a rally in Baltimore, Ferguson, Selma or Washington, DC. Or by a North African man in Paris.

Odeh, however, is a Palestinian Arab citizen of Israel, and he is describing his vision of a state that offers equality to all, but special ethnic privileges to none. A state for Jews and Arabs, but not a Jewish state.

Can the Zionist Union or Meretz embrace that vision? Can the liberal Reform rabbis at congregations in New York, Los Angeles and the suburbs of Washington — rabbis who speak out against racism, who organize food drives for the homeless and clothing collections for the poor — also advocate for a state of Israel that is equally the rightful home of its Jewish and Arab citizens? That, I think, is poised to be one of the defining moral struggles of the liberal Jewish community in the coming years.