Maybe even worse than the murder itself is the fact that no one in the vicinity seems at all moved by it. 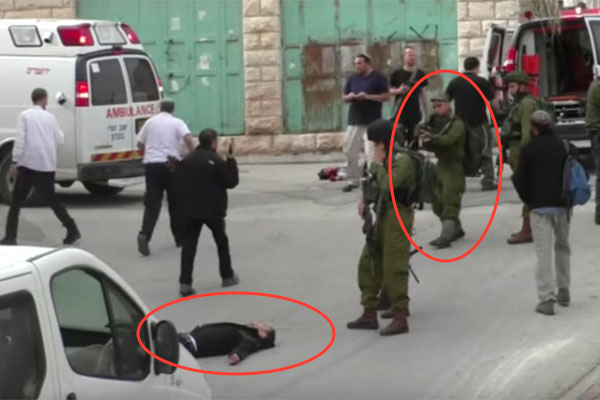 An IDF soldier is seen seconds before shooting a wounded Palestinian man in the head. (Screenshot/B’Tselem)

An IDF soldier was filmed shooting a Palestinian in the head at close range in the Tel Rumeida neighborhood of occupied Hebron Thursday, after he and another Palestinian reportedly stabbed a different soldier, lightly wounding him.

Most Israeli media outlets initially went with the usual headline, “Soldier stabbed, assailants killed.” A few hours later, however, video of the incident was released showing that the Palestinian man was already shot and lying on the ground wounded, presenting absolutely no threat to anyone at the time he was shot in the head, murdered.

The video was captured by local Palestinian resident Emad abu-Shamsiyah and distributed by B’Tselem.

Minutes earlier, before the start of the video, the two young Palestinian men, Abed al Fatah a-Sharif and Ramzi al-Qasrawi, reportedly stabbed a soldier in the Hebron neighborhood. They were shot in the aftermath of the stabbing.

In the video, which begins only after the stabbing already took place, an Israeli soldier can be seen shooting the injured Sharif in the head as he lies on the ground. The soldier is facing the camera with Sharif in between.

In a separate video we have deemed too graphic to upload, a prominent settler from Hebron can be heard telling soldiers, “this dog is still alive.”

No one in the vicinity seems bothered or surprised at all by the shooting — neither the soldiers nor a couple of police officers present nor the medical teams seen treating the wounded soldier. They completely ignore the two wounded Palestinians (al-Qasrawi is lying several feet behind a-Sharif, and can be seen at the end of the video). This total apathy reflects not only the regularity of such incidents of stabbings and responsive shootings, but also the culture of impunity in which IDF soldiers feel free to shoot and kill Palestinians against the IDF’s own rules of engagement.

The Israeli military immediately sought to distance itself from the murder. Israeli security forces have been accused by Palestinians and others of unnecessarily killing Palestinian stabbing suspects since the latest wave of violence began. Israel has consistently denied the practice, although senior ministers have in recent years given what many interpreted as a green light to killing suspected terrorists.

In October 2015, video footage show Fadi Alloun, a young Palestinian man from East Jerusalem, being shot and killed by police officers despite not appearing to pose an immediate threat. In November, two Palestinian girls were shot after stabbing an elderly man with scissors. In response to that incident, IDF Chief of General Staff Gadi Eizencot said he doesn’t want Israeli soldiers to “empty a [rifle] magazine into a girl with scissors.”

Update: Military police arrested the soldier, and high ranking officers ordered that all other soldiers who were in the vicinity at the time of the shooting should also be investigated.