The real challenge facing the Muslim world today is how to stop violent protesters from becoming the face of the religion. In order to do that, we need more Muslims to get rid of their indifference and speak against the misrepresentation of Islam.

Research shows that the people behind “Innocence of Muslims,” the film which disrespects Islam and the Prophet Muhammad and set off riots across the Middle East after it was uploaded to YouTube, are nothing more than a few Islalmophobic individuals. They produced a very a low cost, low quality film which aims to mock the Prophet Muhammad, and present Islam as a violent and irrational religion.

The producers of the film were able to achieve more than what they desired or expected. It was not the film itself that had an impact on those watching, but rather the violent response of Muslims protesting the film in Libya, Egypt, Yemen, Sudan and other countries. These violent protests gave power to the producers. Without them, it is probably fair to guess that the film would not have gotten any attention or almost any views.

However, by now thousands of people watched the trailer due to the protestors. Since one of the goals of the film is to show Muslims as violent irrational people, the violent protestors confirmed the negative image of Muslims. Those who do not know much about Islam or Muslims are watching the protests on television; they see Muslims attacking embassies, and appearing angry and untrustworthy.

If we take a deeper look, I am convinced that the self-proclaimed Muslims attacking embassies and foreigners are the true enemies of Islam. It is they who are insulting the Prophet legacy more than any film or production. The real challenge facing Muslims today is how stop such people from becoming the face of Islam.

The film is disgusting and disrespectful, but should these protestors punish diplomats from foreign countries? Aren’t these diplomats guests that should be respected? One cannot fix a wrong with another wrong, and attacking Americans or foreigners to punish few individuals behind the film is a criminal act. Instead, a good Muslim would follow in the footsteps of Prophet Muhammad. The Prophet used to tell his followers not to respond to insults with insults, but rather to do good to those who insult. He said, “I have family that I do good to them, but they insult me, and I visit them and they don’t reciprocate. Therefore choose the better path. A person you have enmity with, be to him like a dear friend.” Perhaps self righteous Muslims who are violently protesting should take more time to learn about Islam, rather than use it in a disgraceful way.

According to the Hadith (saying of the Prophet), the Prophet said, “he who believes in God and the Last Day must honor his guest” (Sahih Bukhari). When the prophet was asked by other Muslims to pray against their unbeliever enemies, he responded. “I was not sent to curse but to be merciful” (Sahih Muslim).

One of the stories I grew up hearing in my Islamic school is about the Prophet’s Islamophobic neighbor. This person would leave his garbage outside the Prophet’s house every day without fail. One day, the neighbor was to sick to leave his garbage. The Prophet was so concerned for his neighbor that he went to visit him at his home in order to offer his assistance.

Now, as I watch the television stations and read the calling of some self-declared Imams to protest – to attack and kill – I ask myself why. Where did these people get their knowledge from? These self-righteous preachers and protestors are the ones insulting the Prophet and his legacy. While thousands of people are dying on a daily basis in Syria, these protestors seem more concerned with a crappy film than with innocent lives. Why aren’t they in streets protesting the massacres in Syria?

Muslims today face a challenge to protect Islam from radicals and ignorance. Preachers, leaders and Muslim communities must speak louder and louder against such violence. However, the ignorance is a result of an education failure. These protestors did not learn the Islam that teaches peace and love, but rather have gotten a corrupted version which calls for violence.

Yet in the midst of this depressing week, I found some inspiration. My encouragement came from Libya, the place where U.S. Ambassador Christopher Stevens was killed last week. People came out and spoke up against the thugs and killers in the name of Islam. Some Muslims decided to stand up to those trying to brand Islam as a violent, intolerant religion. Most importantly, they were willing to take responsibility. During the protest, people held signs denouncing the murder of the American ambassador. Other signs disowned the killers and apologized to the American people.

I found that the photo below generated much discussion on Facebook. Some took the negative route, comparing Muhammad to Jesus as if they were sworn enemies, while others claimed that this was a minority of Muslims who believe in peace and respect. What was most important for me is that people were inspired by this photo. Thousands of people liked and shared this photo because it strengthened hope in a future without religious enmity. 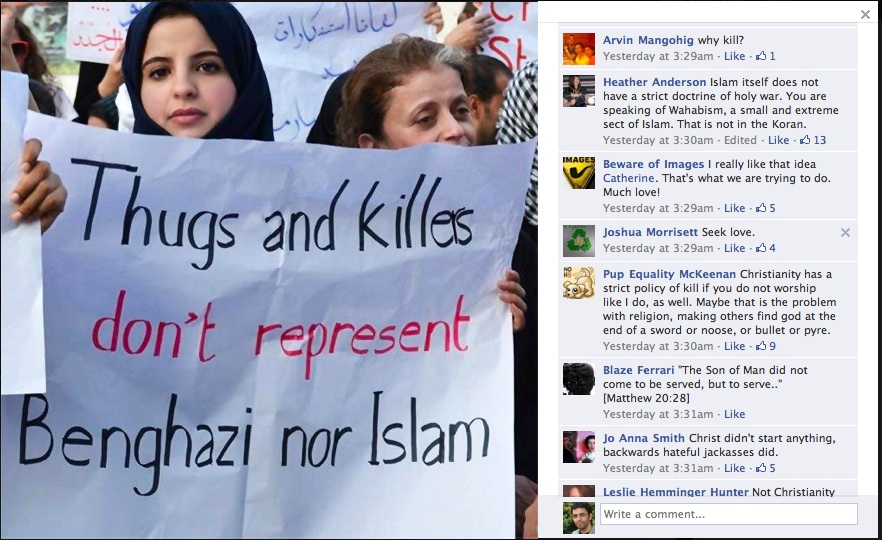 Muslims protesting the killing of the American Ambassador in Libya (facebook)

I believe the people in the photo represent the silent majority among Muslims. They represent a majority that needs to follow in the footsteps of the courageous ones who speak up and defend their faith. This is the kind of protest that honors Islam and the Prophet Muhammad. Now, we need more Muslims to toughen up, get rid of their indifference, get out and speak up for peace and against the misrepresentation of Islam.