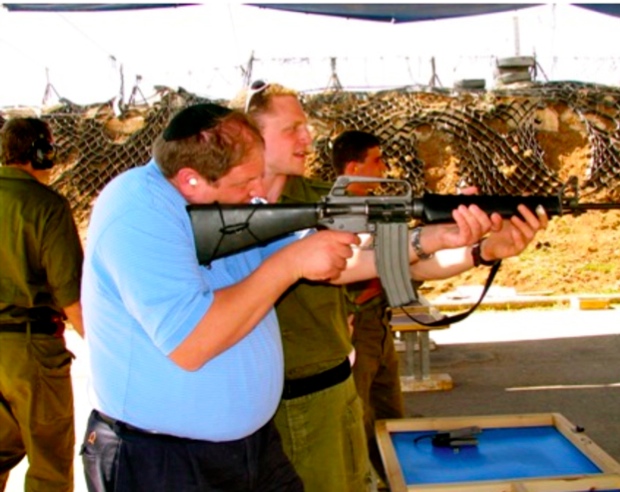 Gone are the days, it seems, when the slogan was, “Visiting Israel? Come see the holy sites!” On Arutz 7, a right-wing news outlet that takes a pro-settler editorial stance, one of the banner ads that appears most frequently bears the slogan “Visiting Israel? Learn to shoot!” The click-through ads lead to the website of a private security company called Caliber 3, which boasts of working “…in close cooperation with the Israel Defence Forces (IDF) in the field of Counter Terrorism.”

The slogan appears under a video interview with two American-born residents of Shilo, a Jewish settlement in the northern West Bank; the video is embedded in an article titled, “Human face of demonized ‘settlers’.” In the video, the two speak of their love for Shilo, their biblical connection to the place and the affection they feel for their neighbours – although they do not specify whether they are speaking of their Jewish neighbours within the settlement, or their Palestinian neighbours. The interview was filmed by a visiting American couple who told Arutz 7 that they sought “…to make the Jews who live in Judea and Samaria look human….because they are usually so demonized by the media.”

Caliber 3 offers a wide range of services, from an 8-week course in “establishing government combat units” (€12,000) to a 1-week course called “Suicide bombers – knowing the enemy: detection, prevention & neutralization” (€2,000). There is also an “exciting new program for tourists” – a 2-hour course that includes a 7-minute lecture in anti-terrorism tactics, an “impressive” 15-minute show of fighting and shooting skills – and, based on the photos –  an opportunity to shoot some guns.

Based on the photos that appear on Caliber 3’s website, the courses appear to be popular amongst religious Jews who are visiting from the United States. There is some cognitive dissonance in seeing paunchy middle-aged men wearing dress shirts and yarmulkes aiming an automatic weapon, or a girl dressed in typical modern Orthodox female style – a jean skirt and long-sleeved casual shirt – assuming a combat stance while holding a weapon that appears far too large for her. The instructors, meanwhile, look very ‘army,’ but they wear civilian shoes and khaki uniforms without rank or insignia. 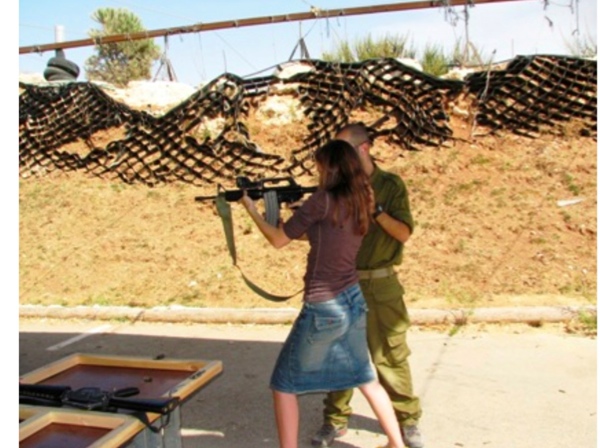 Somehow, a certain brand of Judaism and militarism have become part of the settler movement’s ideological identity. For many religious settlers, the army is an extension of their identity in the sense of serving the state that controls the land mentioned in the bible, that was given by God. For American Jews who support the settler movement’s ideology, and share their conviction that they are surrounded by enemies that present an existential threat, a course in the use of firearms might feel as important as a visit to the Western Wall or the Tomb of the Patriarchs in terms of identity tourism. For Caliber 3’s bareheaded instructors, the settlers’ ideology is certainly a lucrative source of income.