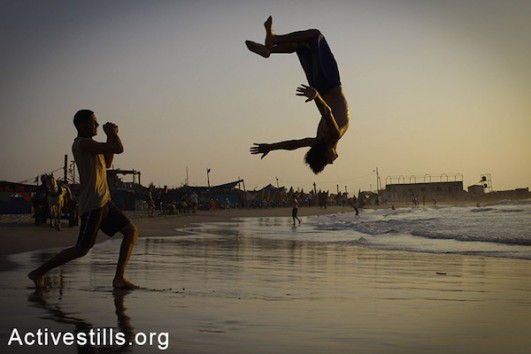 “…and then you would think that whole years would go by, and you would still come to look through the cracks in the fence and would see the same ramparts, the same sentries and the same little corner of sky, not the sky above the prison but another sky, distant and free.”

Just over a year has passed since the most brutal war the Gaza Strip has yet witnessed. It was perhaps the most internationally-covered event in Gaza in a tumultuous and torturous decade, yet the war and its coverage highlighted a long-running problem: that the international media frequently lacks nuance when covering the Gaza Strip and its inhabitants.

All too often, when it comes to Gazans, we find ourselves talking about them without them. +972 Magazine’s Samer Badawi, who was in the Gaza Strip for most of Operation Protective Edge and reported for the site from there, stressed in a recent conversation: “We need to ask ourselves: Do we have any new ideas for how to talk about Gaza? If not, when was the last time we asked a Palestinian in Gaza what she thinks about this? Where are the new voices?”

A new project, “We Are Not Numbers,” is bringing those voices together. The initiative acts as an incubator for young Gazan writers, giving them opportunities to hone their craft. The act of writing also allows the project’s participants to transcend boundaries and, at least via their imagination, cross borders. Finally, and perhaps most importantly, it provides a platform from which young Gazans can engage with the world and tell their stories in their own words – the voices that were so sorely lacking during last summer and its aftermath.

With this in mind, +972 Magazine spoke with some of the writers participating in “We Are Not Numbers” about hope, love, war and, of course, writing. Here they are, in their own words.

Eman Basher, 23, Jabaliya refugee camp: ‘We will keep coping until we get the big prize: Freedom.’ 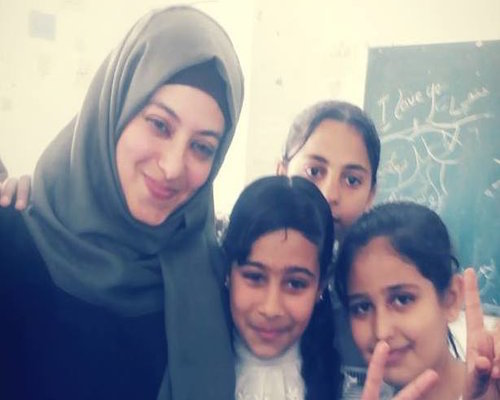 On the war last summer: “We used to have electricity for one hour a day during the war. I used to send letters to my friends on Facebook and wait for “seen” to appear so I can make sure they’re still alive.

My family went to shelters for one night. When my father saw how rough the situation was, he brought us back and he said let us die at home, at least we can die with dignity. Most of the windows of our house were broken due to the strikes, but it was nothing compared to other people.

Sometimes I really have this bad selfish feeling that somehow we earned this, that somehow we deserve it for having a very corrupt government that we cannot fight. Both governments take the blame for not at least burying the hatchet and starting over, as one hand. But the idea vanishes as soon as I see the destruction that follows innocents. They really don’t deserve it.”

On living day-to-day: “We don’t try to cope, it just happens. We feed on hope. They say power is going to be on for six hours a day. We cope, waiting for it to become 8 hours until it really does. They say we are facing a financial problem and there won’t be any salaries for three months. We cope, until the problem is solved. We keep coping until we get the big prize. Freedom. I have never seen or talked to a person here who has lost the hope that we are eventually getting back to our stolen lands.”

On celebrating Eid in Gaza: “Today in Gaza the ceremonies of Eid are so happy. We missed that the last Eid. The last Eid was eidless. But I am thrilled to get all the joy out of this one. I spent Ramadan working in teaching and translating and then I got the last five days of Ramadan off. I spent it making Palestinian cookies, reading “A Thousand Splendid Suns” and helping my mother in the kitchen. Today we cleaned the house, the rugs, the windows and everything preparing for Eid to come.”

On reading: “I read “Mornings in Jenin” and it was one of those books that changes lives, yet we are the heroes of the stories. It was like astral projection – me looking at me in the book, looking at my past and my ancestors and everything they went through.”

On her feelings about Gaza: “Maybe I can say the hated loved city. This prison made us worship simple things. Try to bring a small rose to a stranger and see how he jumps out of happiness. These things are extraordinary to my people. To say you’re sorry first, to kiss your friend all of a sudden, to dance strangely in front of your very old grandmother. Their eyes would just sparkle spontaneously. Our eyes sparkle for the simplest reason, I’ve been observing. And this is what the most horrific wars can not kill. So whenever this city gives me the ugliest days, I fight back with my eyes. I hate her. I hate her nagging, her loud voice, her corruption, her destruction, her people’s restrictions, but I love her eyes. The war gave us more than it took; appreciation for everything. And as long as this city has these eyes, it won’t die. This is what I believe in.” 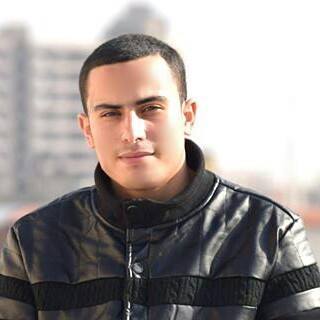 On the war last summer: “I think that we were all targets for the Israeli war machine. I witnessed many horrible scenes of civilians targeted. I also lost my dear brother [Ayman, a Hamas fighter].”

On gratitude: “I think that the wars have left me so many things to be thankful for. I think I am so lucky I survived and my home too. I lost only one brother, but others lost their whole family. I think now I am stronger and capable of many things.”

On writing: “For me, I think writing is a powerful form of resistance, more vital than armed resistance. Writing gives me relief. I believe in what I am doing with “We Are Not Numbers,” and I want to accomplish a lot for my people.”

On how he sees Gaza: “Love, hope, resilience.” 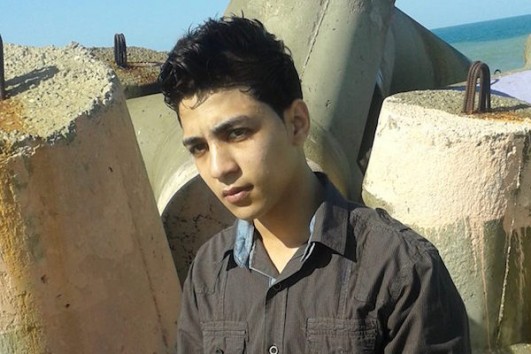 On the war last summer: “Many dreams and wishes were destroyed by the war. The hope of a better life in Gaza died as the reality got more complicated.”

On living day-to-day: “There are many times that thoughts of giving up overwhelm my soul. I feel like I need a little hope that things will get better, that this won’t last forever, and it’s hard to find such hope. I have five brothers and a sister who are all younger than me. They want to live. Looking in my sister’s eyes when she tries to help us while we’re working makes me feel responsible. That I have to fight on and resist.”

On existence as resistance: “I think the greatest and most powerful form of resistance we Gazans practice is living under such wretched conditions and circumstances. Not attempting suicide is resistance.

In Gaza, where there’s hope, there’s resistance. And yes, most Gazans are hopeful people.”

On the international media and outside perceptions: “The international media deals with Gazans just as mere numbers. They don’t realize that behind every Gazan there’s a story that he wishes to express. And that’s what I try to do by writing. I want them to know that first of all, we LOVE. I always feel annoyed when some Americans claim that we teach our children hatred! Even some American friends attacked me with such criticisms.”

On hopes for the future: “Honestly, my dreams are not that big. My ultimate goal would be having a dignified and normal life, where I don’t have to worry either about my family or for my life.”

On how he sees Gaza: “Giving, loving, but oppressed.”

Shrouq Aila, 20, Jabaliya refugee camp: ‘I write I live. This is what I believe in.’ 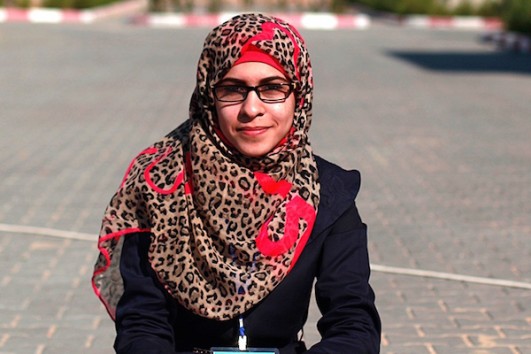 On her family history: “My family is from Yibna, now Yavne. They were expelled and came to Gaza in 1948.”

On how she is spending the summer: “I am currently in my summer semester at university. I’m also working as a freelance translator and waiting for the power to be up. Usually it is six hours a day, but today it is eight.”

On learning English: “I love English. I’ve been practicing it for five years, through talking with friends that are native speakers and reading books or articles.”

On why she joined the project: “People get bored with reading about killing and damage. So I turned to the other side. People have to know that we can find hope in hopeless places, especially Gaza!

People outside Gaza have to live and feel what we feel. You can not imagine the tremendous amount of grief that surrounds Gaza. Yet what connects us with this land is LOVE despite the war.”

On writing: “To write means to fight. Writing is existence and a way to fight back against Israeli propaganda. It is a way to resist. Writing also means for me to fly beyond every border and siege, to break rules and walls. Writing empties the heart of every feeling that aches within you. I’m the kind of person that if I conceal words inside my heart, I will die. I write I live. This is what I believe in.

I am working on a new piece about Khaled Hammad, the journalist that was killed last summer when Israel shelled an ambulance. His wife, Hala, was six months pregnant when he was killed. Now there is a baby, his little girl Toleen. The story will be about their lives without Khaled, the husband and father.”

On existence as resistance: “For me being alive is not only a sign of existence. Everyone lives. But you have to make sure that your living is also an act of resistance. This will happen when you speak out about everything you feel, see and hear.”

On the war last summer: “When you became too close to death, you start to appreciate everything around you, even housework. During a war you start missing everything whether you like or hate it.

We love life the same as others. I wished the war to be over and promised myself to never get mad again, whatever I face. But after the offensive was over, I realized that war is never over. The stories and pain occupy the air.”

On how she sees Gaza: “Love and war, sorrow and joy.”