Water scarcity in the Gaza Strip has transformed Wadi Gaza into an environmental disaster that affects hundreds of thousands of Palestinians. Israel’s blockade makes its rehabilitation even more challenging. 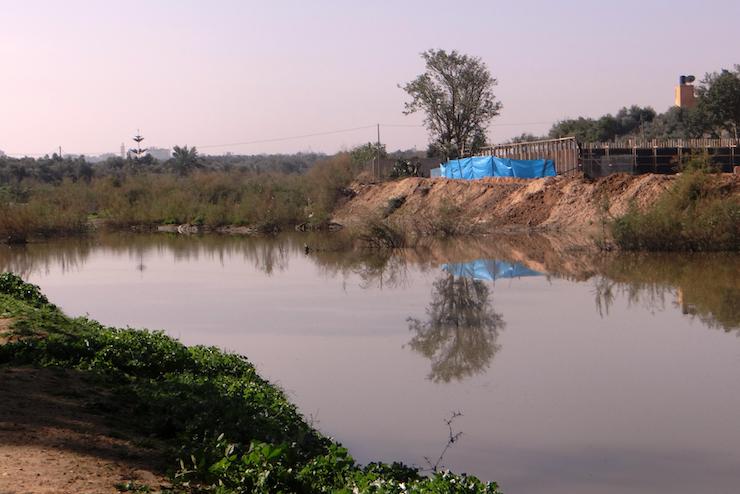 A pool of wastewater seen east of Wadi Gaza in the Gaza Strip. (Photo by Mandy Lara Sirdah)

Ahmed Hilles, an expert with the Palestinian Environmental Quality Authority, makes sure to pinch his nose when crossing the bridge over Wadi Gaza. Also known as Gaza Valley, the wadi lies in the middle of the Gaza Strip. Almost two decades ago, Palestinians from Gaza would come here to enjoy the view, the natural habitat, and the wildlife. Today it’s a dumping site for construction debris and sewage, letting off pungent odors and posing a public health risk to Gazans.

In June 2000, the Palestinian Ministry of Environmental Affairs declared Gaza Valley a nature reserve due to its significance as a natural ecosystem. The only coastal wetland in the Palestinian territories, the valley used to support a rich variety of plants and animals. A convergence of developments over the past few years, however, transformed the once-vibrant reserve into an environmental disaster.

The Gaza Valley springs from the South Hebron Hills and the Naqab, known in Hebrew as the Negev desert, in total over 100 km (62 miles) long. Inside the strip, its twists and turns span 9 km (5.6 miles), eventually discharging into the Mediterranean Sea.

Gaza Valley was historically one of the main water sources in southeast Palestine, says the director of research at the Palestinian Authority’s Ministry of Tourism and Antiquities in Gaza, Hiam al-Bitar. Archeological excavations in the area have revealed evidence of life along the banks of the valley dating back to the Bronze Age, he explained.

When Israel occupied the Palestinian territories in 1967, it also seized control of all the water sources in those areas, which, according to human rights group B’Tselem, it continues to control to this day, with the exception of the coastal aquifer that runs under Gaza. Water supply to the West Bank and Gaza, largely determined through negotiated agreements with Israel, is not enough to cover Palestinians’ domestic, commercial and industrial needs. Over-exploitation, sea water intrusion and sewage pollution of the coastal aquifer – the source of 95 percent of water in Gaza – have exacerbated the water scarcity there.

Extensive urban development has transformed the wetland, and the lack of adequate infrastructure is one of the primary factors destroying it. “Unfortunately, 65 percent of people living in the middle of the Gaza Strip have no way of treating their sewage,” says Hilles. “The surrounding municipalities have taken to dumping their sewage in the valley.” 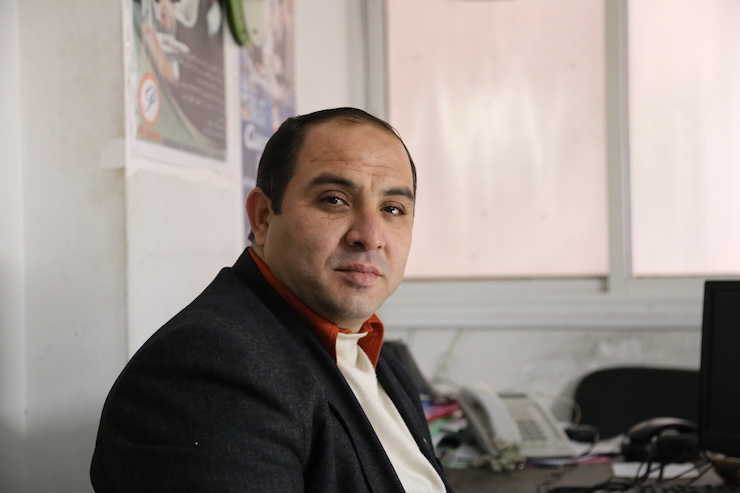 Ahmed Hilles, an expert with the Palestinian Environmental Quality Authority, says the main obstacle to water and waste management in Gaza is Israel’s blockade. (Photo by Mandy Lara Sirdah)

According to the United Nations Environment Programme, roughly 70 to 80 percent of domestic wastewater in Gaza is released into the environment without treatment. Tests on water from the valley conducted in 2014 by a team which Hilles led showed that it is highly contaminated with parasites, and families living around the valley are exposed to severe health hazards.

Omar al-Hourani, 38, lives with his wife, four daughters, and elderly mother in a house near Gaza Valley. He can’t leave the area, he says, because he’s unemployed and can’t afford to relocate. Al-Hourani is a Palestinian refugee who used to live in Syria. He fled Syria in 2011 when the war began, thinking he would be reaching safe shores in Gaza, where his mother’s family lives. Instead, he now lives in one of the most contaminated areas in the Gaza Strip.

“We have to cope with harmful insects and rodents. My children can’t sleep at night because of the insects,” al-Hourani said.

The Palestinian Authority had devised a five-year plan to conserve the natural environment of the valley, to attract visitors to the site as well as ensure the protection of migratory birds, as the wetland is a major international migration flyway. But when the Second Intifada erupted in September 2000, those plans came to a halt.

Since Hamas took over the strip in 2007, political disputes between the group and the PA have delayed infrastructure development inside Gaza. According to Hilles, the main impediment to water and waste management, including in Wadi Gaza, remains Israel’s blockade.

Crumbling infrastructure, chronic electricity outages, and fuel shortages imposed by Israel’s siege have disrupted operations in water desalination facilities and sewage treatment plants. In 2017, for example, the sewage facility in Wadi Gaza was forced to shut down due to power shortages, according to a testimony given to Gisha, an Israeli rights group that focuses on freedom of movement in and out of Gaza.

Hilles said that following Israel’s 2014 war on Gaza, a Palestinian team of environmental specialists, which he was a part of, sent a request to the United Nations to have a delegation examine the extent of environmental damage resulting from Israel’s siege and assault on the strip. The UN planned to send a fact-finding mission, Hilles explained, but the Israeli army denied the crew’s entry into Gaza.

With funding from the International Committee of the Red Cross, a temporary wastewater treatment plant was constructed in Wadi Gaza, and has been operating since 2015. The Palestinian Water Authority and Gaza’s Coastal Municipalities Water Utility (CMWU) have plans to improve the plant, as well as rehabilitate and expand the sewer network in the area, according to a 2017 report by the Japan International Cooperation Agency. Funding from the German Development Bank is also being used to build a central pumping station there, according to CMWU. The treated water might be used to irrigate crops, according to Hilles, and to restore the some of the valley’s natural vibrancy.

But even with the help of international aid, Israel’s import restrictions on “dual use” items pose a major obstacle to the jumpstarting the rehabilitation of Gaza’s sanitation systems. According to the UN’s Office for the Coordination of Humanitarian Affairs (OCHA) in the occupied territories, Israel claims that some 70 percent of water and sanitation-related equipment and materials could be repurposed for military use, and therefore restricts their import into Gaza.