If it had happened anywhere other than Hebron, one would have been justified in assuming that the scene unfolding was coordinated for a not-too-sophisticated film about “the conflict”. Surely somewhere out of sight there is an entire movie crew ready for the director to yell “cut!”, so that all actors on this bizarre and horrific set can trade the severity on their faces for laughter and ease during their coffee break. 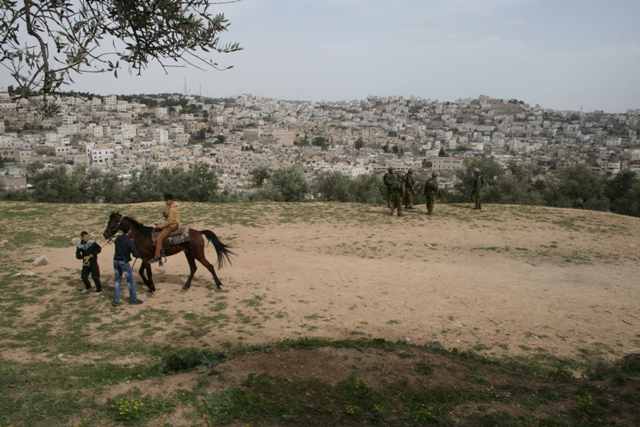 But this is Hebron, and the dramatic horror is very much real. In front of us is a small landing at the top of a hill overlooking the old city, with the Cave of the Patriarchs in plain view. On the landing, a Palestinian youth guide is taking children on two-minute horse rides, one at a time. Watching the horse and its successive little riders are the kids whose turn is coming up, a group of settler girls in the same age group, and five soldiers in full combat gear.

The group of girls, encouraged by the recent arrival of the soldiers, is starting to heckle the horse riding group. “You’re ugly,” shouts one girl at another child looking her way. “You’re all heathens and I want you all to die,” laughs another 7-year-old, meaning every word. “Why are we afraid? Let’s tell the soldiers to kick them and their horse so that we can play,” calls out a third as a challenge to her friends while holding a football in her hand. No one moves. Two older women pass by and one girl spits in their general direction and half-whispers “fat whores!” Nothing happens. The soldiers stand on the side, talking to each other, and the other kids keep going on and off the horse, looking timidly at the girls. They know that they cannot possibly talk back without the soldiers intervening. In the background, loudspeakers are blasting a song into the air. “We shall overcome…” No. Seriously? Yes. This is Hebron. 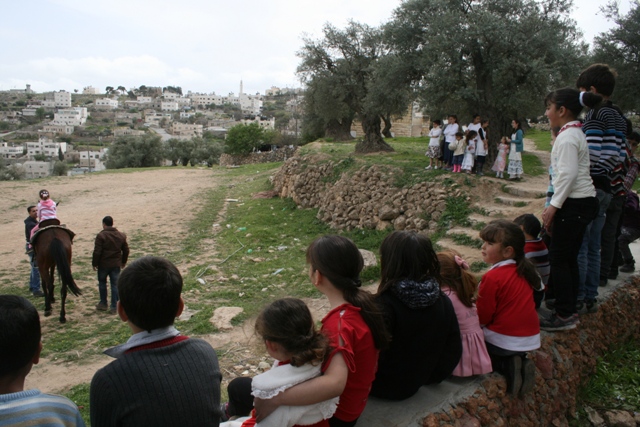 I came here after being invited by Youth against Settlements (YAS) – a local group dedicated to work with Palestinian youth and promote popular nonviolent protests against the occupation – in the one city which, more than anywhere else in the West Bank, has “apartheid” written all over it. The city where 500 Jewish settlers get to rule the H2 quarter, making the lives of more than 10,000 Palestinians miserable; where entire roads are closed for any Palestinian, including for those living on them, and who are forced to enter and leave their own homes through the rooftops. The city where even joint roads are segregated by walls so as to keep Palestinians out of the settlers’ way. The city where racist graffiti was previously sprayed all over Palestinian shops that have been closed down, until the Israeli Ministry of Education started sending schoolchildren there on tours and made sure the graffiti would be wiped clean. The city that countless soldiers have left after serving the settlers in ways that scarred their souls (and where a friend of mine, served as a soldier after having planned to refuse, committed suicide). 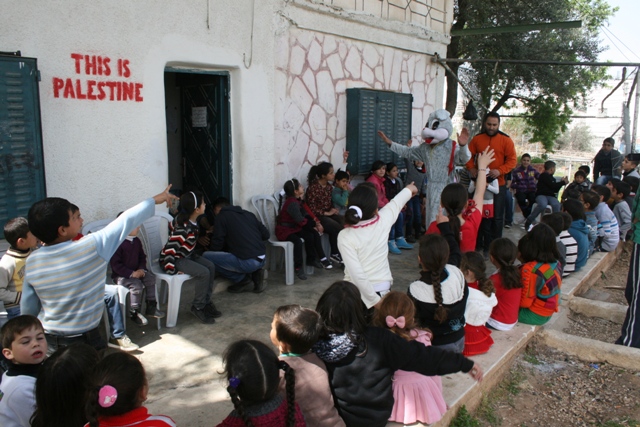 Here, in this city, YAS decided to plan a special welcome for American President Obama. Dozens of children gathered today to learn about the history of the Civil Rights Movement in the U.S., and to write the first black President personal letters. The younger kids enjoyed games and learned demonstration chants in English (“1, 2, 3, 4 – occupation no more!”), while the older ones heard a short lecture about the history of racism and segregation in the U.S. South, watched a film about Martin Luther King and his nonviolent outlook, and wrote Obama messages under the titles “we have a dream” and “yes we can make a change.” At the end of the day, while some were riding a horse outside, others stayed in to learn the words of “We Shall Overcome.” 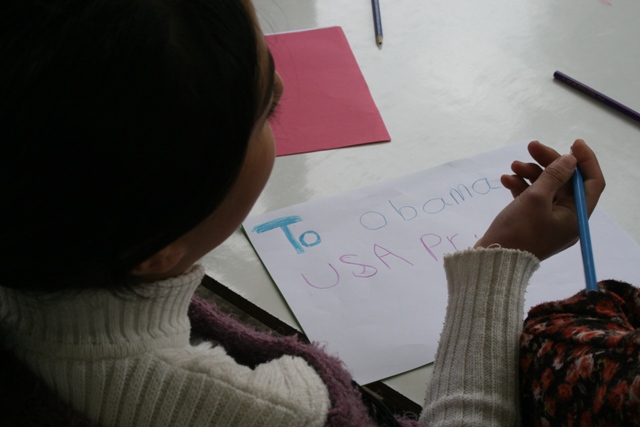 Letter to Obama. Probably won’t get there (Haggai Matar)

The workshop was taking place in the “Sumud” house in Tel Rumeida, home of the YAS movement. Opposite, less than ten meters away, is the house of settler leader and former Kach activist Baruch Marzel. Throughout the hours of the different Palestinians workshops settler kids from the neighboring house, heavily guarded by armed soldiers, came out to see what the fuss was about. Every now and then they’d shout out a curse, but for the vast majority of the time they were talking between themselves or trying to figure out what was going on. Several times kids from both sides would just stand there, staring at each other for long minutes in complete silence. 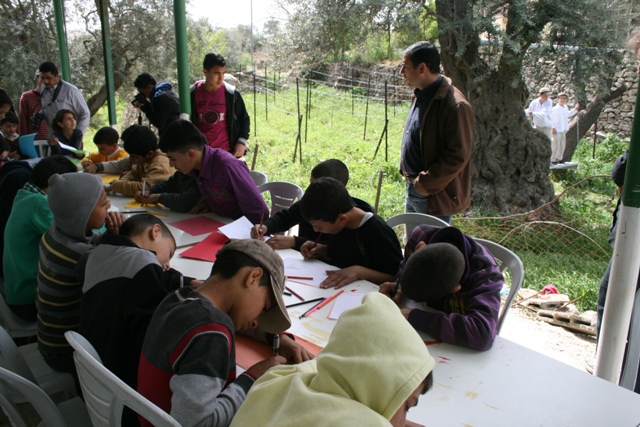 One could only try to imagine what was going through their heads. On the one hand, they see a child just like themselves – the same age, laughing just the same at the funny gestures of the bunny-clothed clown. On the other hand, they all see the other as the enemy. The Arab heathens. The Jewish settlers. The dissonance that all people have to find ways to live with in a country of apartheid was three times intensified in the experience of these young people – neighbors, not entirely aware of the greater politics in which they all are pawns. And already, at these young ages, they all knew their place. The knew not to talk to each other. They knew that the settler kids can fling curses freely and ask the soldiers to accompany them wherever they go, while the Palestinian kids only have a bunch of YAS activists, Israeli and international journalists with cameras around. The settlers still have the upper hand. 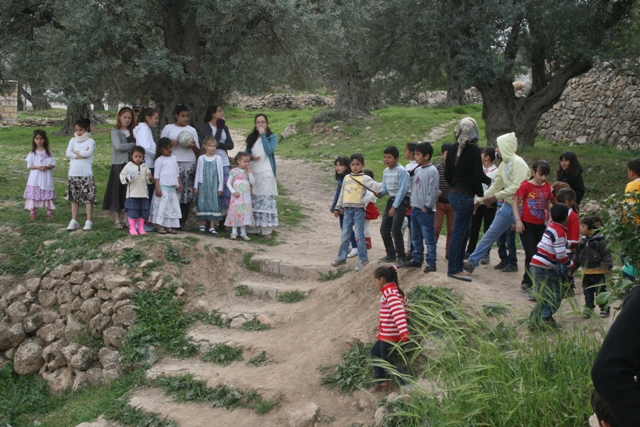 No communication. Settlers on left, Palestinians on right (Haggai Matar)

Both groups couldn’t quite figure us lot out. The Palestinians found it strange to have Israelis standing with them, and some whispered to others that we were settlers. The settlers, meanwhile, could not possibly accept us as Israeli, and regarded us as foreigners. In a city where divisions are so clear cut and extreme, and of such vital importance, there’s little room for anything outside the strictest of definitions. Feels like the West Bank version of West Side Story. 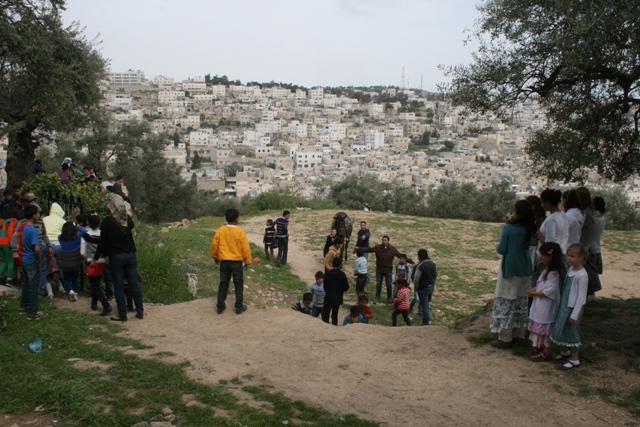 At the end of the day the guide promised the kids that their letters would be given to President Obama, the purpose of whose visit was described as “coming to help us get the settlers out of here”. But Obama will never receive these letters. Nor will he ever come to Hebron, or care much about the youth’s plans for nonviolent civil rights marches. Nor does he intend to do anything about the settlements. Speeches and declarations aside, the current U.S. administration, like all those before it and like its European counterparts, will go on supporting Israeli governments and apartheid policies with military aid, financial support, trade etc. Settlements in Hebron and the entire West Bank will continue to expand with those very funds, channeled through the supportive government, pushing Palestinians into smaller and smaller enclaves under military rule. The children of Hebron will demonstrate nonviolently and sing “we shall overcome,” but after being attacked one too many times by the neighbors and the IDF, with its U.S.-manufactured weapons, some will inevitably turn to violence. And on we go.

Related:
WATCH: A ‘Jews only’ street and a Palestinian dirt path in Hebron
WATCH: Demonstration to open Shuhada Street in Hebron