About 250 people joined the weekly popular demonstration in Bil’in against the wall and settlements, which was dedicated to resisting army oppression towards political activists. In the past few weeks soldiers have been crossing over the wall and chasing Bil’in demonstrators with more violence than has been witnessed there in the last couple of years. In addition, two residents have been arrested in relation to the protests and earlier this week three youths in Qalandia were shot dead by a border police raiding party.

Villagers in Bil’in were joined by representatives of the Ni’ilin and Ma’asara popular committees, Member of the Palestinian Parliament for the Mubadara (Initiative) party Dr. Mustafa Barghouti, Israeli and international activists and a boy scouts’ marching band. Demonstrators reached the wall and were met by soldiers who instantly started firing tear gas canisters at the march. Local youth responded by throwing some canisters back at the soldiers, adding stones as well and were answered in turn by rubber coated bullets. 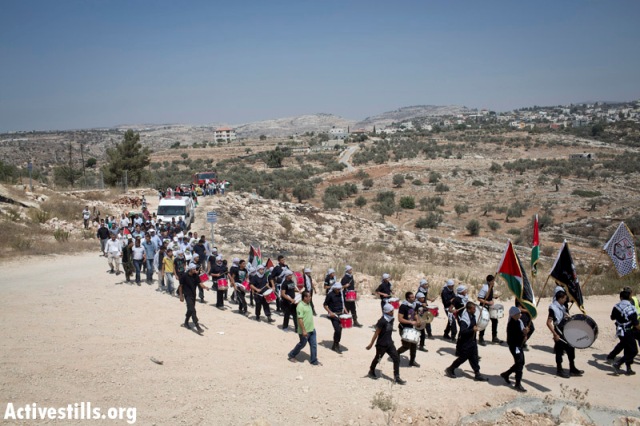 After about 15 minutes the gate in the wall opened and soldiers started passing through. At first the “skunk” water canon came into use and then the “venom” tear gas canon. Soldiers started chasing demonstrators back towards the village while continuing the exchange of tear gas and stones as retreating activists piled rocks into small barricades to slow the soldiers’ progress down. Soldiers also forced photographers to retreat, arresting one Israeli activist on the way. 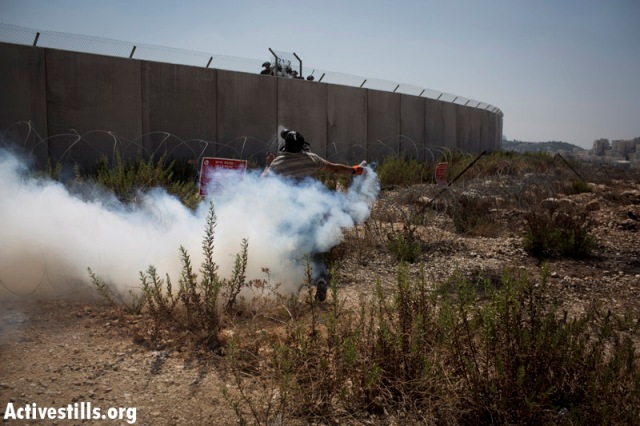 After about two and a half hours of protest and confrontations, after the soldiers progressed all the way to the old route of where the wall once went through and after two small fires were set ablaze from tear gas canisters and put out by villagers the demonstration ended. The Israeli activist was taken to a nearby police station and is being represented by Adv. Gaby Lasky, a fundraising art sale for whose benefit is simultaneously taking place in Tel Aviv. 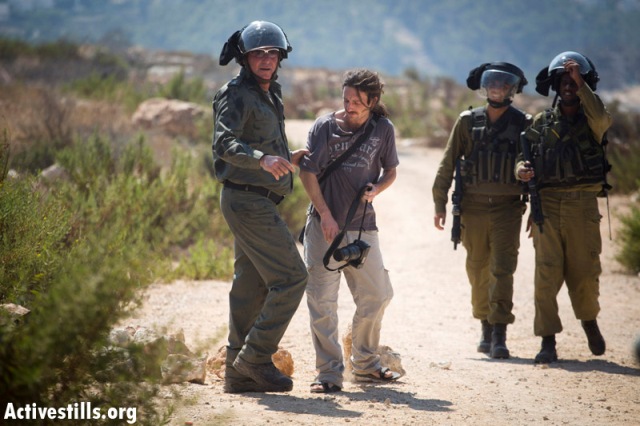