While Netanyahu was busy blaming a Palestinian for the Holocaust, a group of Jewish activists asked the World Zionist Congress what it was planning to do to end the occupation. 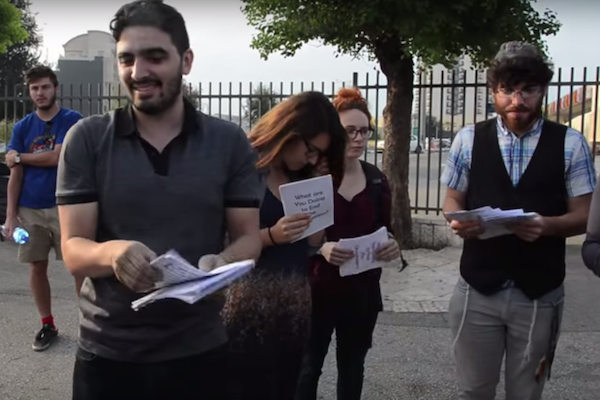 Hours before Prime Minister Benjamin Netanyahu made headlines for telling the World Zionist Congress that a Palestinian inspired Hitler to exterminate the Jews, a group of Jews from around the world came to that very same congress to remind delegates of the conditions in which Palestinians live.

The group, comprised of members from both the Center for Jewish Nonviolence and the Israeli left-wing group, All That’s Left, arrived at Jerusalem’s International Convention Center, commonly known as Binyanei Hauma, at 7 a.m. on Tuesday — the first day of the congress — to hand out flyers to delegates making their way inside. One side of the flyers included a quote from historic Zionist leader and promoter of Jewish-Palestinian bi-nationalism, Martin Buber, from World Zionist Congress in Karlsbad, Czechoslovakia in 1921, where he implored the congress, and the Jewish people at large, to “reject with abhorrence the methods of nationalistic domination, under which they themselves have so long suffered.”

The other side of the flyer included a simple question for the delegates: “What are you doing to end the occupation?”

Established in 1897, the World Zionist Organization (WZO) is often called the “Parliament of the Jewish people,” and was convened by the father of modern Zionism, Theodor Herzl, in Basel, Switzerland. Since its inception, the goal of the WZO has been to unite the Jewish people and bring about the establishment of the Jewish state. It is a global organization supported by the Jewish National Fund (JNF), the Jewish Agency for Israel, Keren Hayesod (United Jewish Appeal), and the Israeli government itself.

Every five years the WZO convenes a Congress whose representation is determined by elections amongst the international Zionist political parties. Between congresses the Zionist General Council convenes annually for discussions on pressing matters to the Jewish people such as Israel, intermarriage, and ways for diaspora Jews to connect with Israel.

For Ilana Sumka, the director of the Jewish Center for Nonviolence, which brings together Jews from around the world for a week of nonviolent activism, learning, and building with anti-occupation groups in Israel and the West Bank, the action was a natural response to the complete absence of the occupation from the World Zionist Organization’s agenda.

“The World Zionist Congress brings together Jews from around the world and controls millions of dollars. There is no transparency in how they give out that money, but we know that a lot of that money goes to supporting settlements in the West Bank. We want to hold the World Zionist Congress accountable in order to end settlement funding and end the occupation,” Sumka told +972 Magazine.

After nearly half an hour of handing out flyers, several members of the group decided to try and enter the conference itself, eventually making their way past security to the area in which delegates were lining up to receive their entry passes. There the group erupted into a spontaneous call-and-response led by All That’s Left activist Moriel Rothman-Zecher: “We are here/Jews from around the world/at the World Zionist Congress/to ask the question/that we didn’t see on your agenda.”

By the time Rothman-Zecher managed to utter the word “occupation,” he was already being pushed by one delegate and accosted by several others. He eventually regrouped with the other activists, who joined together to sing “Hine Ma Tov,” a traditional Jewish hymn that roughly translates to “Behold, how good and how pleasant it is for brethren to dwell together in unity.” Two foreign delegates stood opposite them, trying to out sing the activists with their own rendition of Hatikva, Israel’s national anthem. The activists finished singing and promptly left the center.

Outside the convention center the excitement was palpable; the group was clearly energized by their ability to draw attention to their cause, and the fact that one of the members was personally escorted by security only strengthened the feeling that their message was not welcome at the congress. But could the activists have had a bigger effect on the policies of the World Zionist Organization had they become delegates and participated directly in the decision making process?

“There are a few reasons why direct action was important, particularly here,” said Elisheva Goldberg, who serves as communications director for the Center for Jewish Nonviolence, as she left the building. “Firstly, it makes a scene, which forces people to take notice. The second reason is that it gets a lot of good people together and creates community for the activists.”

Bryan Mann, a rabbinical student at Hebrew College who is living in Israel as part of the T’ruah Israel Fellowship — which provides public programming for rabbinical students in Israel and in the United States focusing on different social justice issues — actually voted for delegates to the World Zionist Congress whom he hoped would be “pushing liberal and progressive agendas.” Realizing, however, that voting was not enough to bring the occupation to the center of the WZO’s attention was “really saddening” for him.

“I think that there are issues on the congress’ agenda that do reflect Jewish values. However, one of the biggest Jewish values I was raised with was tikkun olam, the notion of repairing the world and social justice. Any time those social justice values came up against Israel politics, progressive politics always took a back seat. Sadly, it’s not surprising to see that play out here,” says Mann.

“Talking about the occupation is necessary,” he adds, “it is our job to talk to Jews, especially Jews who are part of these organizations, and encourage them to meet people across the separation barrier to try and give Palestinians a future.”