On Saturday, Palestinian families in the Hebron Hills found themselves subject to state violence yet again, this time in the form of a tear gas attack. Their crime: harvesting olives on their land.

It’s that time of the year again and the olive trees are ripe and ready for harvest. I found myself last Saturday picking olives alongside Palestinian families and Israeli activists from Ta’ayush in the village of Tarqumiya, northwest of Hebron. 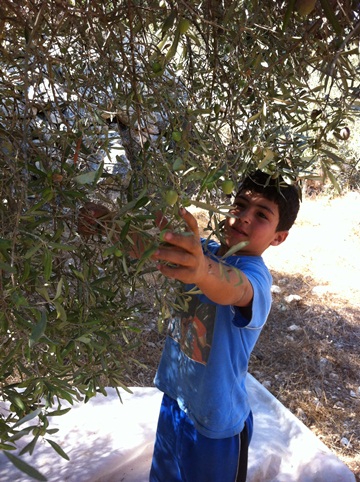 As the morning light crept over us, the only sounds to be heard were those of intermittent conversations, of hands sifting through coarse olive branches as they plucked the fruit, and then of the olives dropping like scattered rain drops on the nylon sheets below. The annual olive harvest is a family affair. Toddlers gather olives which have strayed from the sheets below the branches, men and women work on separate trees, each in their own conversations. Up until midday, sweet tea had been the only interruption to this monotonous but somewhat therapeutic work.

At around 11:30 a.m.., heads turned and we saw an army jeep with some soldiers standing outside peering down at the harvesters from the other side of the olive grove. A few Israeli activists meandered through the shrubs, trees and boulders, finally arriving at a fence which separated us from the four or so soldiers and security guards who had come from the neighboring Adora settlement. As we arrived, a squat young-looking soldier was already directing another one of the men to fire a tear gas canister into the center of the valley. His justification: that some Palestinians had allegedly come too close to the fence, which in itself was deemed to be a security hazard. Within the space of a few minutes, two tear gas canisters and two tear gas grenades had been randomly fired into the valley among the families. People scattered and fell, and those who were fortunate enough to avoid the clouds of chemicals continued  harvesting with evermore determined intensity.

I could not help but feel a deep sense of irony as these young men in uniform from across the fence tried to justify their actions. They claimed to be enforcing security in order to protect Jewish citizenry. And here were we, a group of Israeli and Jewish activists on the other side of the fence, standing among the security threats, and the only thing that we were subject to were copious amounts of sweet tea, food and good company. The ability of these troops to fire chemical weapons upon these families is symbolic of a deeply entrenched orientalism within Israeli society. It is a socialized racism, typical of any colonial-settler society, which frames the indigenous population as inherently inferior, dangerous and in need of discipline like some sort of disobedient delinquent. This is what enabled those who fired to ignore the blatantly obvious: that these people were of no threat whatsoever.

The events of Saturday cannot be dismissed as the work of a bad apple. There is a systemic logic to these widespread and repeated episodes of state violence. They, alongside a conveniently burdensome state bureaucracy, a maze of imposed legislative measures and outright racist policies, aid a concerted political effort by Israeli policy makers to remove the Palestinian population from Area C. As building permits are denied authorization, homes are demolished, and olive groves are either vandalized or left to rot, life for ordinary Palestinians in Area C is made ever more unsustainable. Consequently, the cities of the West Bank continue to swell in size, which only further exacerbates the already rampant levels of unemployment and endemic poverty. Whilst some of us sit back and criticize the settlers and their actions over coffee, their and the state’s expansionist project is gaining tract and becoming an oppressive physical reality.