Video shows Israeli photojournalist and AFP photographer being attacked by Israeli soldiers at the weekly protest against the occupation in the West Bank village of Nabi Saleh. One Palestinian protester is reportedly shot with live fire.

Israeli soldiers threw stones at and attacked Israeli and Palestinian photojournalists during a protest in the West Bank village of Nabi Saleh on Friday, during which the army used live fire against protesters. One Palestinian was reportedly shot in the head.

Palestinians in Nabi Saleh hold weekly protests every Friday against the occupation and to demand access to the village’s spring, which was taken over by Israeli settlers.

In a video of the event, a soldier can be seen throwing a stone at Israeli photojournalist Haim Schwarczenberg and a Palestinian photographer who works for AFP as they attempt to comply with soldiers’ orders to leave the area. In 2011, Schwarczenberg photographed the close-range shooting of Mustafa Tamimi with a tear gas projectile fired from a military jeep in Nabi Saleh. Tamimi later died of his injuries.

As he walks away, an officer runs after him and pushes Schwarczenberg to the ground. When he gets up and moves further away from them, the officer throws another stone at Schwarczenberg and the AFP photographer.

Schwarczenberg told +972’s and its Hebrew site, Local Call, that he was standing on a hill photographing Palestinian stone throwers when his colleague, Abbas, told him to get close to the ground because soldiers were shooting live bullets at the stone throwers.

“One of the soldiers suddenly appeared from behind us and shouted, ‘get out of here before I shoot you’,” Schwarczenberg said. “Abbas and I got up to go but then the soldier shouted, ‘lay down!’, and pointed his weapon in our direction [at the stone thrower behind us].” The stone thrower escaped.

“At that point [the soldier] began pushing me and Abbas, another soldier joined him and threw a stone at us that didn’t hit me,” he continued. “Right after that he threw me and my cameras to the ground.”

A few minutes later the soldiers shot a Palestinian man in the head, Schwarczenberg said. 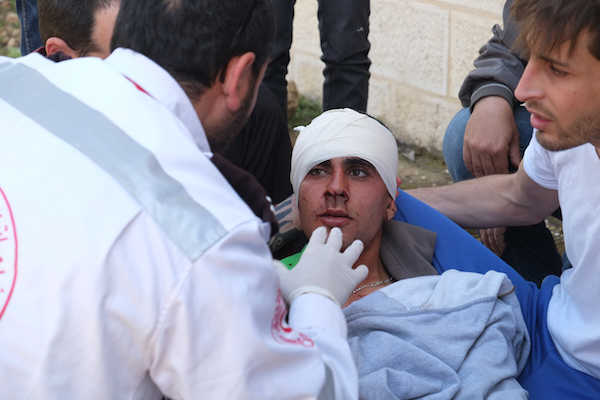 A medic treats a Palestinian man who was apparently shot in the head by IDF soldiers, Nabi Saleh, April 24, 2015. (Miki Kratsman/Activestills.org)

Update:
+972 contacted the IDF Spokesperson to get a response to the video and offered to send the army a copy of the video for review. The Spokesperson issued the following statement.

During “an illegal and violent riot that was held by some 70 Palestinians and the media,” the army used crowd dispersal means, the military spokesperson said.

“The IDF does everything in its power to ensure freedom of the press in [the West Bank] but will not allow violations of the law or for the press to harm IDF forces,” the spokesperson concluded.

In a subsequent statement, the spokesperson added that “the incident is being looked into.”