Close to 1,000 people gathered in Tel Aviv Tuesday night to protest the coalition deal between Prime Minister Netanyahu and Kadima head Shaul Mofaz, under the slogan: “The entire nation is the opposition.” The protest was reportedly put together by organizers of last summer’s J14 “social justice” protests and there were smaller demonstrations also held in Jerusalem and Beer Sheva.

Protestors expressed shock and anger over the fact that Mofaz led the opposition party into the government just days after announcing he would never join Netanyahu’s government, and accused both the prime minister and Kadima chairman of being liars and “shady dealers,” more interested in their own seats of power than the interests of the country. 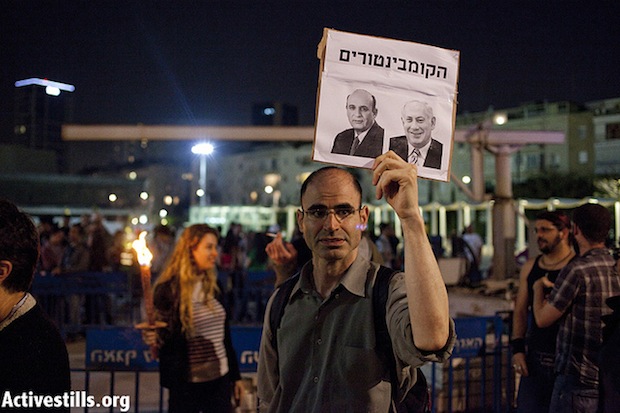 Protestor in Tel Aviv holding a sign with the faces of Netanyahu and Mofaz that says: "Combinators', slang for shady dealers (Photo: Activestills)

Six people were arrested at the protest in front of Tel Aviv’s Habima Theater, among them Haaretz municipal journalist Ilan Lior,  Tel Aviv city council member Yoav Goldring, and a photographer with the free daily newspaper Israel Hayom. According to police the protest was organized without permit, and thus constituted illegal assembly.

Haaretz journalist Ilan Lior told Walla news (Hebrew) that he asked the police to cross the street in order to see what was going on and was aggressively rushed into a police car and arrested.

While according to a Haaretz poll, a majority of the Israeli public see the deal as motivated by personal gain and not the stability of the country, Israel Hayom released a poll Wednesday stating that Netanyahu’s popularity had increased since the deal, with 39.8 percent of the public approving of the deal, slightly more than the 31.9% who oppose it.

It remains to be seen whether the new government deal will help reignite the J14 “social justice” protests from last summer. Protests are planned around the country this Saturday May 12.

Here is a video showing more footage from the protest Tuesday night:

Read more:
Netanyahu the strongest prime minister since David Ben-Gurion
Did Mofaz sell himself short, or does he know something we don’t?
The irreparable damage of Netanayahu-Mofaz fiasco
Coalition deal’s bright side: Days numbered for rotten government
Through deal, Bibi buys ‘industrial peace’ for Iran war