Two new videos catch a police ‘skunk’ truck spraying East Jerusalem neighborhoods with foul-smelling liquid. The smell was so bad that 4,500 students had to stay home from school.

The “skunk” trucks drives slowly through the neighborhood. It is evening, and there is no evidence of clashes in the area. The truck proceeds slowly, sprays putrid-smelling water on a nearby building, continues on and shoots once again. When it’s all over, the truck has tainted schools, homes, streets – entire neighborhoods – with its unbearable stink. Just like that.

Two videos that were filmed this past week by Palestinian residents of Jerusalem and were given to +972 support claims by residents regarding the inappropriate use of the skunk by the police. In August, the Association for Civil Rights in Israel (ACRI) filed a complaint to the police regarding multiple cases of the arbitrary use of the skunk, especially at times when there are no protests or clashes. It seems that the police has not changed its ways.

The common understanding among residents and human rights organizations is that the police are collectively punishing Jerusalem’s Palestinian residents, in light of clashes between youth and police in these neighborhoods. But the punishment neither begins nor ends with skunk water; the police block entrances to these neighborhoods with concrete blocks, detains residents for long hours at checkpoints and hands out petty fines – all at the behest of the Jerusalem municipality. 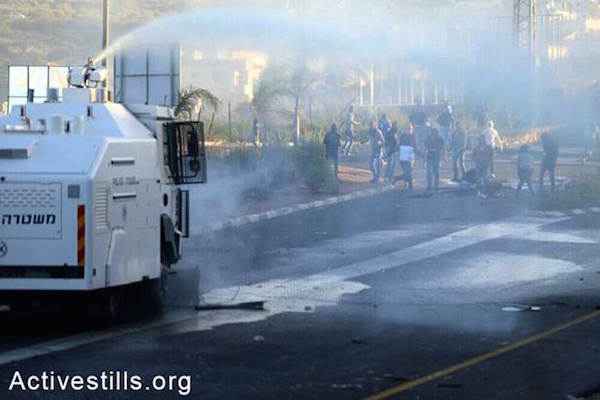 Police use the ‘skunk’ water canon to disperse protesters in Kafr Kanna, a day after Israeli police fatally shot an Arab man in the village. (photo: Yotam Ronen/Activestills.org)

In the A-Tur neighborhood, the police shot skunk water at four large schools, forcing the parents of 4,500 students to leave their children at home due to the unbearable smell. “It was this past Friday, at around 5:30 p.m.,” says Khader Abu Sabitan, a member of the parents’ committee in the neighborhood. “I was on the road and saw them pass with their machine, and saw how they began shooting water at the school. I’m telling you – there was nothing there. It is Friday at 5:30 in the evening, and there was no one in the school or on the streets. Nothing. Everyone was home. They went to all four schools in the neighborhood, shot the water, and left.”

WATCH: The ‘skunk’ sprays foul-smelling liquid on a school in A-Tur

“After we saw what they did, we told the parents not to send the children to school on Saturday, which is a school day for us. We thought that the municipality would be able to solve the problem by Sunday, since the children didn’t go to school on that day. It wasn’t a strike – we just could not enter the area because of the smell. We sent letters through the teachers on Saturday and Sunday, but no one came. So we brought back the children to school on Monday, and told them to go straight to class ad not linger outside. The smell even permeated the classrooms, but they closed the windows and made do somehow. They stayed inside during the lunch break and then went straight home. It has been a week, and it still smells. Less, but you can still smell it.”

For anyone who has not experienced it, words cannot express the smell of the skunk. The Israeli-developed truck is primarily used by the army in the occupied territories over the past several years, although now it is slowly making its way to Jerusalem and Israel. The strong stench smells like a mix of feces and animal carcass – gagging is almost inevitable.

The worst part is that there is almost no way to get rid of the smell. Showering doesn’t help, and protesters usually deal with it is by taking a dip in the sea. Objects that have been sprayed with skunk water often smell for much longer periods of time. After being hit with a few drops of skunk water, my camera smelled for nearly half a year.

It is difficult to fathom exactly why such large amounts of skunk water must be sprayed at classrooms and homes, as can be seen in the second video that was filmed in the Jabel Mukaber neighborhood of Jerusalem. Like in the video from A-Tur, there are no stone throwers or protesters. The police act casually, there are no rocks being thrown in the air, no sounds of explosions, no screaming or bullets that characterize confrontations in East Jerusalem. Just a skunk truck spraying homes.

“The perception of the residents and organizations is that the police uses the skunk routinely, regardless of whether they are dispersing protests, as one can plainly see in the video” Oshrat Maimon, an attorney with the Ir Amim NGO. “The problem is that we don’t even know what the police’s procedure is when it comes to using the skunk. Therefore, we don’t know if the problem is in the procedure itself, or in the lack of implementation. The truth is that we’re a bit helpless in this situation.”

Over the past several weeks, activists from East Jerusalem have met with members of human rights organizations in order to attempt to formulate a response to the actions of the police and municipality. They, however, found it difficult to arrive at a solution. “Our field coordinators say that people are afraid of the police and do not want to provide testimonies,” says Maimon. “Even people who were shot, such as someone was hit with a sponge-tipped bullet in the head or a woman who was shot and her uterus was torn – when our investigators speak with them, they are afraid that if they speak up the police will find its way to them and find a way to harm them.

In response to ACRI’s request, the police responded that the skunk is used according to regulations, but refused to say explain what the regulation says. ACRI has attempted to force the police to publish the regulations vis-a-vis the skunk. Meanwhile in East Jerusalem, the occupation becomes smellier than ever.

+972 asked for a response from Jerusalem Police. Their response will be published here.

Related:
Hundreds of Palestinians, Israelis protest collective punishment in East Jerusalem
The hard fact is that Israeli repression works
What Palestinian media is saying about the Jerusalem violence