Police arrest 15, use water cannons against hundreds of ultra-Orthodox demonstrators who hit the streets of Jerusalem to protest the jailing of an IDF deserter.

The demonstration is part of a larger protest movement against the arrests of Haredi deserters, which began immediately following the Jewish holiday of Purim by a radical faction of the ultra-Orthodox movement. On Thursday the protesters blocked central roads in Jerusalem, including the main entry to the city. The police used water cannons that fired blue liquid against the demonstrators and arrested 15.

Although they are exempt from IDF service, for decades Israeli society has debated over whether ultra-Orthodox Jews studying at religious seminaries should be enlisted. In November 2015, lawmakers passed legislation extending their exemption from duty, reversing a law passed in 2014 that would have seen it expire. However, the ultra-Orthodox must go to the enlistment office to qualify for exemption — which some refuse to do because of their rejection of the state. Police hold down ultra-Orthodox demonstrators during a protest against the arrest of an IDF deserter, Jerusalem, March 23, 2017. (Oren Ziv/Activestills.org)

Over the past week, Military Police arrested a number of deserters, leading to an even greater presence of ultra-Orthodox men at the protests. Last Friday, demonstrators disrupted the annual Jerusalem Marathon, after which Mayor Nir Barkat suspended Deputy Mayor Haim Epstein, whose constituents made up the bulk of the demonstrators. The mainstream ultra-Orthodox community, especially supporters of the United Torah Judaism and Shas parties, does not support the demonstrations, which also target its leaders. Israeli police carry off an ultra-Orthodox man during a demonstration against the arrest of a Haredi IDF deserter, Jerusalem, March 23, 2017. (Oren Ziv/Activestills.org)

The deserters who were arrested and sentenced to prison time chose not to show up at the military recruiting office to protest a law to draft ultra-Orthodox men and increase the enlistment quotas for Haredim, which were intended to harm the mostly ultra-Orthodox periphery — in accordance with the instructions of Rabbi Shmuel Auerbach.

Auerbach told his students that every arrest of a deserter will be answered by demonstrations. Ultra-Orthodox journalist Eli Shlezinger revealed that in the wake of the demonstrations, the police decided not to hand over deserters to the Military Police. 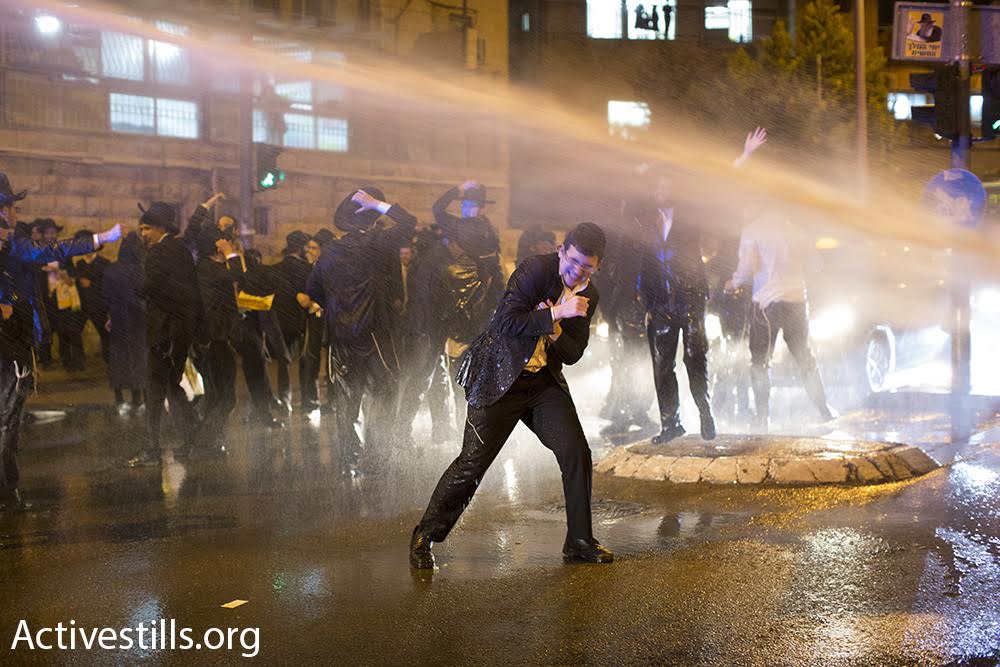 Ultra-Orthodox protesters are sprayed by a police water cannon during a demonstration in Jerusalem, March 23, 2017. (Oren Ziv/Activestills.org)

For now, it seems that the sides won’t be able to reach a compromise that will send the protesters home and prevent another round of conflagration. The question is whether a growing protest movement will force the ultra-Orthodox politicians, who thus far have remained silent, to break their silence and work to find a solution. After all, if they do not, they might be next in the crosshairs.