Dozens of Israeli settlers throw stones at Palestinian cars and houses following the murder of Rabbi Raziel Shevach near the illegal settlement outpost of Havat Gilad. 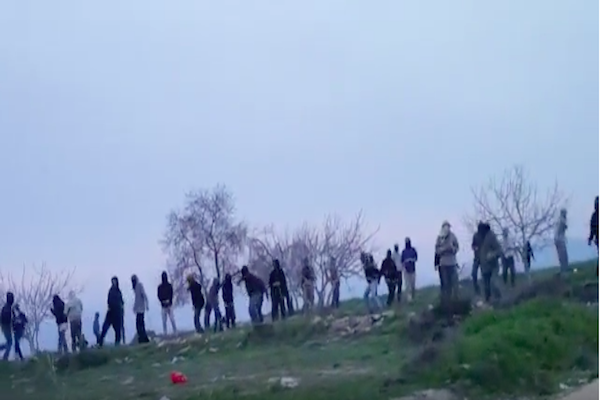 Israeli settlers throw rocks near the Palestinian town of Jit on Wednesday. (Courtesy of Yesh Din)

Israeli settlers carried out a string of revenge attacks targeting Palestinian civilians following the killing of Rabbi Raziel Shevach in the occupied West Bank on Tuesday. Shevach, 35 and a father of six, was shot to death at a traffic junction near the illegal settlement outpost of Havat Gilad, where he lived.

At the Yitzhar and Shilo junctions in the northern West Bank, settlers threw rocks at Palestinian cars on the evening Shevach was killed, Yesh Din spokesman Gilad Grossman told +972 Magazine. Settlers also threw rocks at houses in the Palestinian towns of Jalud and Asira al-Qiblya, both near Nablus.

During Shevach’s funeral in Havat Gilad on Wednesday, mourners reportedly interrupted Education Minister Naftali Bennett’s speech with chants of “revenge.” Bennett replied that “the only revenge is construction,” by which he meant settlement construction in the West Bank. Defense Minister Avigdor Liberman said he would look into officially recognizing the illegal outpost of Havat Gilad.

Later that afternoon, dozens of Israeli settlers marched to the nearby Palestinian villages of Jit and Far’ata, where they threw rocks at houses in the villages. The settlers damaged houses in Far’ata and trees in Jit, Grossman said.

Video obtained by Yesh Din and Rabbis for Human Rights show what appear to be masses of settlers throwing stones at Palestinian homes in Jit and Far’ata, terrorizing residents there and damaging homes.

Israeli settlers throw rocks at Palestinians in the village of Jit:

As the occupying power in the West Bank, the Israeli army is obligated under international law to protect the Palestinian civilian population. However, countless reports by Israeli human rights organizations have documented how Israeli authorities fail to stop settler attacks, failing to prosecute those that take place, and failing to prosecute soldiers for violence perpetrated against Palestinians. 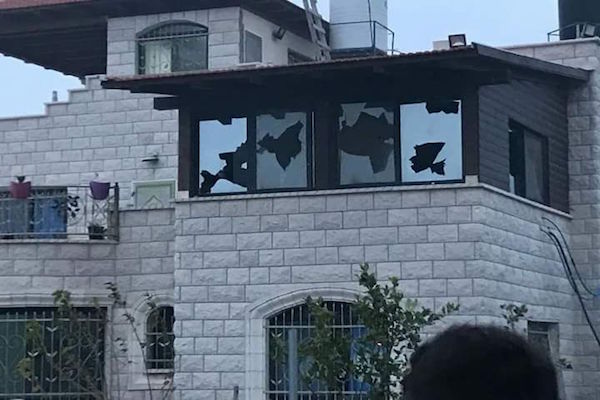 A Palestinian house in the village of Far’ata damaged by settlers in a revenge attack on Wednesday. (Courtesy of Yesh Din)

Revenge attacks following terrorism in the West Bank is not an exceptional phenomenon, Grossman says. “We saw this after the attack in Halamish, and after the murder of the Henkin couple, which led to a protracted wave of attacks against Palestinians in the West Bank.”

Omar-al Abed stabbed and killed Yosef Saloman, 70, Chaya Saloman, 46, and Elad Salomon, 36 in the West Bank settlement of Halamish in July of 2017. In October 2015, two Palestinian gunmen shot and killed Eitan and Na’ama Henkin, both in their 30s, on the road between the settlements of Itamar and Elon Moreh in the West Bank.

After a decline in recent years, settler-related violence increased in 2017. According to the United Nations Office for the Coordination of Humanitarian Affairs (OCHA) in the occupied Palestinian territories, “there were 156 incidents that resulted in Palestinian casualties or damage to Palestinian property by the end of November compared with 107 in all of 2016.” An OCHA report published in December of 2017 noted that the increase in settler violence coincided with a significant rise in Palestinian during the same period.