The ultra-Orthodox party, which has drifted far to the right over the past several years, reaches out to the all the Israelis who are not middle-class – which is to say, the majority.

Shas, the party founded by the late Rabbi Ovadia Yosef and today led by Rabbi Aryeh Deri, is usually seen as the narrowly-sectorial party of the Sephardic ultra-Orthodox. Even the kingmaker status it had enjoyed for nearly two decades is usually (and rather haughtily) ascribed by commentators to their ability to march a docile and obedient religious minority to the polling stations, rather than to broad popular appeal. But the launch of the new election campaign this past weekend signals a strike both against this traditional image – and against the middle-class focus that will likely be a key feature of the 2015 general election campaign:

The message of the ad should be painfully obvious to any of the several parties pretending to the banner of social justice, yet Shas is the first to say it outloud: yes, the middle class has had it tough, but no, they are not remotely the worst off. The ad also throws down the gauntlet to the big parties in terms of representation: the characters in the ad are Mizrahi, Ethiopian and Ashkenazi, half men and half women – much more than can be said for the candidate slates of all the other parties. Even more crucial for a party that many secular Israelis identify closely with the religious/secular divide is the fact that not one character in the ad is ultra-Orthodox. The target audience is obviously broader than anything any ultra-Orthodox party tried before.

The ad’s inclusivity is particularly startling when one looks at the other parties hoping to swoop in on the social-economic protest vote. Professor Yossi Yona, the only Mizrahi candidate to run in the Labor party’s primaries (the party is the main contender for the social justice vote) reached number 10 on the list, but was pushed down to a nearly-unelectable number 23, since the kibbutz movement automatically reserves several spots on the list.

The kibbutz movement is still one of the main pillars of the party, which doesn’t so much excuse Yona’s demotion as much as aggravates it. Kibbutzim constitute the core of the increasingly marginalized, old elite that many associate with Labor, and are one of the reasons the party is either loathed or ignored by most Israelis (despite the decade and-a-half that has passed since Labor was tested – and failed – as a ruling party). Yona is one of handful of Mizrahi activists still willing to give the party (which, incidentally, was responsible Mizrahi discrimination to begin with) a second chance, and all he gets for his pains is a kick to the back row. Meretz conference, in which members will elect the candidate list, is still to come, but the party’s realistic spots are still expected to be occupied by a majority of Ashkenazis, perhaps one Mizrahi and one Palestinians – if we should be so lucky. Moshe Kahlon, himself Mizrahi, has yet to reveal his campaign, but has so far been extraordinarily careful in his messaging and seems at risk of stretching his slogans too thin by keeping just about everybody happy. What he should be doing is tapping into how just about everyone in Israel is exasperated and pissed off.

Shas, however, has a lot to answer for and much to prove. As many as six former MKs and ministers of Shas have been convicted of fraud and corruption, including Deri himself. While defenders argue that they are being singled out and that Ashkenazi political figures engaging in similar practices are let off the hook, these recurring scandals help many Israelis ignore the genuine accomplishments of Shas by dismissing the party as kleptocratic and corrupt.

Secondly, for most of the past 15 years, former Interior Minister Eli Yishai pulled Shas steadily to the right, dumping its traditional welfare-oriented agenda in favor of egging on their electorate to scapegoat the non-voting poor: Palestinians, migrant workers and asylum-seekers. In 2012, Yishai was unceremoniously demoted in order to allow for the return of the party’s legendary leader, Aryeh Deri, who was just coming back from the cold after serving a prison term for corruption, not to mention several years of court-imposed political retirement.

Deri broke hard to the Left, but the electorate did not follow, with Shas just barely holding onto the 11 seats it held under Yishai (and ending up in opposition, to boot). Yishai left Shas ahead of the upcoming elections to set up his own party, and so far he is floundering. After having been ditched by every potential ally and not even projected to pass the electoral barrier, he has done considerable damage to Shas, pushing it to just above the electoral threshold itself. While Shas has somewhat recovered, it is quite clear that a significant proportion of it would-be base is not enamored with the inclusive, broad social-democratic direction taken by Deri.

Finally, Shas is also hobbled by two of its most defining features as an ultra-Orthodox party – hardwired deference to the Council of Sages, a rabbinical committee that directs and instructs the party in lieu of an internal democratic process; and a deliberate lack of representation for women, since the candidate list Shas is putting forward consists of only men. This is the subject of a growing frustration among women Haredi voters, and a jarring contrast to the half male, half female cast of the ad. As comments on Deri’s Facebook post of the ad suggest, both aspects put off many would-be voters on the left side of the political map, who one would expect to be amenable to the new messages.

In other words, many of Shas’s traditional voters don’t like the party’s new direction, while a great deal many of would-be voters don’t think the change of direction is genuine enough.

Still, it would be a mistake to write the ad as a cheap electioneering stunt and the recent shifts within Shas as plus ça change. To start with, the leftist activists crying foul over the ad are simply not its target audience; Shas is not trying to elicit a feeling of charity from the Israeli elite towards the bottom 20 percent – which, incidentally, includes most Palestinian citizens of Israel. Instead it is appealing directly to that 20 percent, right over the heads of the elite. This 20 percent might be far less concerned with the aforementioned shortcomings – not because they don’t care about party democracy or representation for women, but because the hypocrisy and cronyism of Israel’s liberal parties make Shas seem very straightforward in comparison. Activists from the middle class usually have difficulty accepting a rejection of their compassion (and/or genuine solidarity) by minority activists, so expect a lot of indignation in liberal circles toward Shas. Just don’t confuse it with a rejection from the broader Israeli body politic.

And secondly, whatever its recent tribulations, Shas has a place of pride in the Mizrahi history in Israel as the first (and so far only) party to have consistently represented the Mizrahi voice in open defiance of the Ashkenazi establishment. This makes it an ideal platform for the creation of a broad party representing everyone rejected and excluded by said establishment – not just the ultra-Orthodox Sephardis, but Mizrahis generally, and very much beyond. 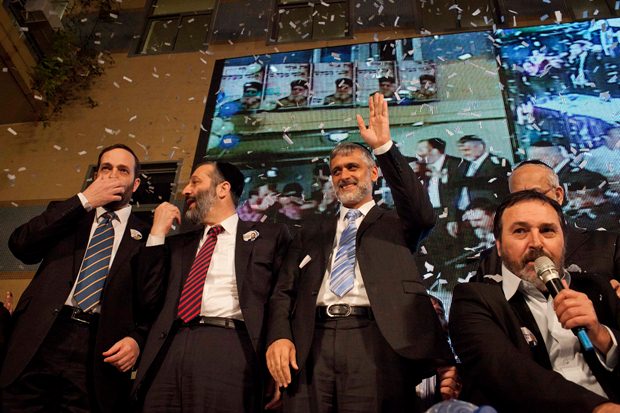 The party’s latest conference, in Ashdod, featured a very unusual guest speaker: Ophir Toubul, editor of radical cultural magazine Café Gibraltar. “The lower class today has a color,” Touboul said, with Deri sitting to his right. “It is the Mizrahis, the Russians, the Ethiopians, the Druze, the Bedouin, the Arabs… I call on Rabbi Deri to open up the party, to make Shas belong to all the people of Israel, and you might not like what I’m about to say – women, conservatives and seculars, should all be here. What Bennett did in the Jewish Home is what should be done at Shas.” His remarks were met with thunderous applause.

This does not mean Shas will transform overnight into a broad popular party, or that it would be wildly successful even if it did. It does mean that the potential is there, however  – and if nothing else, the campaign launch is a step in the right direction.