The shooting death of photographer Yasser Murtaja by Israeli snipers has left no doubt among Gaza’s journalists that they are being targeted. Now they are demanding solidarity from Israeli journalists on the other side of the border. 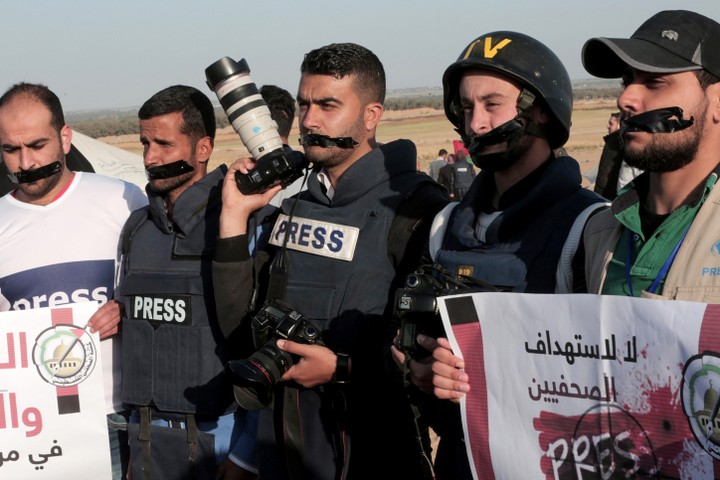 Palestinians takes part in a protest against the killing of journalist Yasser Murtaja in Rafah, near the Israel-Gaza border, Gaza Strip, April 8, 2018. (Abed Rahim Khatib/ Flash90)

Last Friday was a difficult one for journalists in Gaza. Journalist Yasser Murtaja was shot and killed near Khan Younis during Gaza’s “Great Return March” at the border with Israel, despite wearing a protective press jacket. According to reports, he was standing over 1,500 ft. from the border fence when he was killed by Israeli sniper fire. Just two weeks before his death, Murtaja published a post in which he expressed his wish to photograph Gaza’s port from the air. Since then, the post has turned into a symbol.

Murtaja was not the only journalist to be shot that day. Photographer Khalil Abu Aadra was also wearing a press jacket when he was shot and wounded in the leg. Palestinians report that a number of other journalists were wounded by IDF fire that day.

“Our message to journalists in Israel is that they must condemn attacks on journalists in Gaza,” says Mohammad Zaanoun, a photojournalist in Gaza who has been taking photos for Activestills over the past few weeks. Zaanoun has two siblings, Ibrahim and Islam, who are also photographers. Zaanoun says that his brother photographed the evacuation of one of the casualties east of Jabaliya refugee camp, approximately 1,600 feet from the fence, when he was shot in the hand. At the same time, Islam, who works for a Palestinian television network, was wounded by a tear gas canister fired by Israeli soldiers from across the border.

“I think that the army directly targeted photographers last Friday,” says Zaanoun. “Look at the facts. Not a single journalist was wounded the previous Friday. We usually stand behind the demonstrators; it is difficult to stand up front because of the noise and the smoke. We do not endanger anyone, we only pass on photographs of what is happening. We are demanding for international protection for photographers. International law forbids harming journalists.” Zaanoun says that the Palestinian Journalists Syndicate filed a complaint with the International Criminal Court at the Hague following the attacks on journalists last Friday. Zaanoun used to be in touch with Israeli journalists, who before the blockade on Gaza would often sleep in the offices belonging to Palestinian media outlets. In 2006, Zaanoun was severely wounded by an Israeli missile while photographing in Gaza City’s Shuja’iyya neighborhood for Ma’an News Agency. He was hospitalized for nearly a year in Soroka Hospital in Israel (which he calls “Soroka Military Hospital”), and remembers how journalists from Yedioth Ahronoth, as well as Palestinian journalists would visit him.

“It does not matter to me whether a journalist is Israeli or Palestinian, or what his religion is,” says Zaanoun. “We need to respect everyone. I wouldn’t accept anything happening to an Israeli journalist.”

Meron Rapoport is an Israeli journalist and an editor for Local Call, where this article was first published in Hebrew. Read it here.