Celebrations erupt on the streets of south Tel Aviv as Sudan’s dictator steps down after 30 bloody years in power. Despite what appears to be a military takeover, Sudanese asylum seekers in Israel believe their revolution will win out. 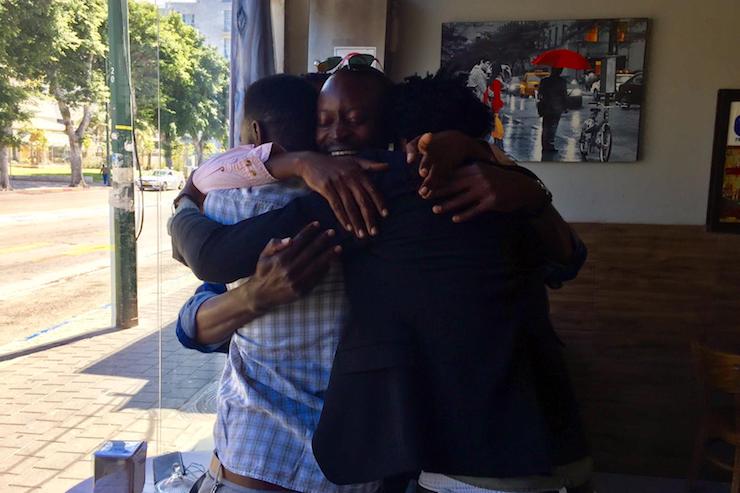 Mutasim Ali didn’t have much time to talk when we met in his south Tel Aviv office Thursday morning. The Sudanese Army had just announced that Omar al-Bashir, who has ruthlessly lead Sudan for the last 30 years, was preparing to step down, and Ali had a party to plan.

After all, for Ali and for the approximately 7,000 Sudanese asylum seekers in Israel, al-Bashir, who is wanted by the International Criminal Court for crimes against humanity, war crimes and genocide in Darfur, is the very reason they fled their homeland. Al-Bashir’s downfall feels like it could bring them closer to the day he and hundreds of thousands of Sudanese refugees worldwide can return to their homes.

As a university student, Ali was persecuted and imprisoned for demonstrating against the regime, prompting him to flee to Israel. His home in Darfur was burned down by pro-government militias, and his family still lives in a displaced persons’ camp.

“This is one of the most exciting days of our lives,” says Ali, who has since become a lawyer and is one of the leading activists for refugee rights in Israel, as we leave the office and head across town to meet other Sudanese asylum seeker friends.

“On the one hand, there is nothing more beautiful than watching our people rise up against this dictatorship. On the other hand, I can’t help but feel jealous that I am not out there in the streets with them,” he says, his eyes nearly welling up with tears.

There are thousands of Sudanese asylum seekers in Israel, where they have found safety but not refugee protections, do not hold legal status, and lack many basic services and rights. Ali is the only Sudanese national to have been recognized as a refugee by Israel. The government has invested great time in resources in finding ways to deport African asylum seekers and in lieu of that, to making their lives miserable here. Those who were able have left for more welcoming countries, but most will tell you their real dream is to return home.

“I have been waiting for this moment my entire life,” says Munim Haroun as we walk through south Tel Aviv’s Levinsky Park, which has become a central meeting spot for asylum seekers in the city over the years. “I am so proud of the Sudanese society, they made huge efforts to bring down the dictatorship.” Haroun, like Ali, was also a student activist who protested the regime, until he was forced to flee, leaving his family behind. “The protesters demonstrated for five straight months until the army woke up and tell the dictatorship enough.” 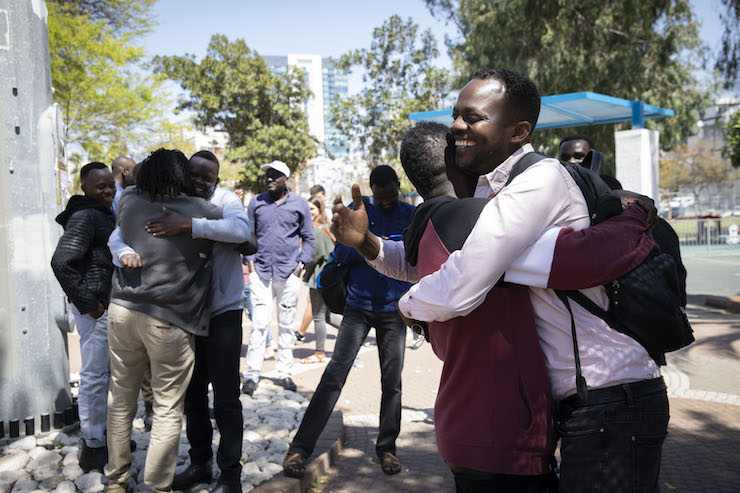 As the news was still breaking, many of the Sudanese activists said they hope the protesters’ demands — a civilian transitional government and democratic elections, rather than a government led by the military — will be met in full. “We need to build a new country, one that believes in human rights and respects members of all religions,” says Haroun.

“For the past day I have been trying to find ways to be smuggled into the country,” he adds with a laugh. “I want to stand with my people there. There is nothing I miss more than my country and my family.”

As they wandered the streets of south Tel Aviv, Ali and Haroun began amassing a celebratory crowd of Sudanese behind them. Everywhere they went, they were greeted with chants of support, slogans calling for the downfall of the al-Bashir government, and demands for “freedom, justice, and peace.”

For now, their eyes are locked on social media as they watch the army release their friends and fellow dissidents released from prison, some after a decade behind bars.

“We began the struggle against the regime years ago, today the entire Sudanese people has joined in. The question is not why this happened now, but how we will build a new country,” Ali says.

Along with the elation and excitement, however, comes great caution. By midday, when Sudan’s defense minister announced that the army would take control of the state for a two-year transitional period, things began looking gloomy.

“We want change,” says Mubarak Abkar. “The army’s role is not to manage the state. This will only allow the dictatorship to continue.”

“The protests will continue, and even this temporary military regime will fall,” says Haroun. “They don’t have a solution for the economic situation, and when it comes to human rights, they have nothing to offer.”

And yet for now, optimism that the revolution will eventually win out seems to be prevailing.

“It is hard to describe what I am feeling right now,” says Tugud Omar Adam. “We were part of this huge change. We support our society and hope for an end to the extremist groups, as well as anyone who collaborated with al-Bashir. For him, this moment is about celebration and looking forward. “As I have said for years, the moment we can go back, I won’t stay here another second. I miss my mother.”