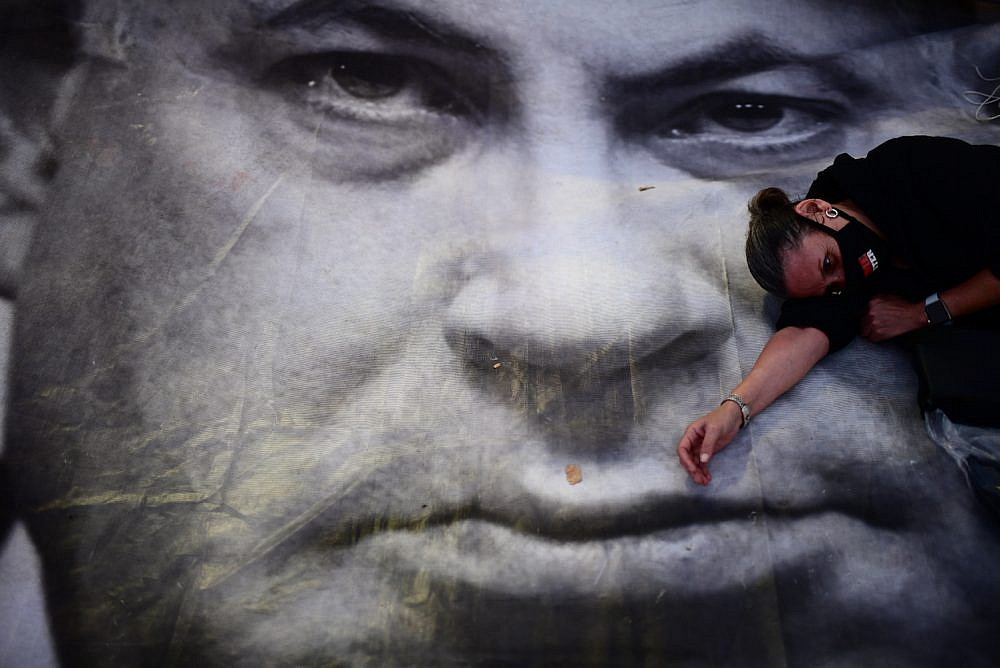 The spread of COVID-19 has wrought massive changes over the last two months in the realms of politics, economy, and geography across the world. Basic norms have changed, emergency legislation has been passed, massive economies have ground to a halt, and simple daily human contact has been reduced to a minimum.

Although the crisis will undoubtedly ease, it is unlikely that things will return to “business as usual.” Substantial social and political changes are afoot, signaling the onset of a new era we may now term “coronialism,” most notably in Israel-Palestine.

The term coronialism echoes, of course, “colonialism,” but it operates under different circumstances. In coronialism, the relatively stable fabric of life is undermined by a dangerous invasion of an external force. The invasion transforms society in ways not envisaged by the local population, with structural changes spawning short and long-term transformations. The health crisis of the coronavirus may only be the tip of the coronialism iceberg, the consequences of which will be mainly social, economic, and political.

Coronialism, like its predecessor, attempts to conquer the minds of those under its rule. It would be impossible to understand how, against the spread of what currently remains a medium-scale disease, billions of people have come to accept draconian closures, political disempowerment, and economic ruin with little protest or disobedience. This is made possible by an atmosphere of fear, which provides governments and the media cover to bombard us with an avalanche of details of the impending “disaster.”

In Israel, one cannot explain the decision by Benny Gantz, who claimed to represent the anti-Netanyahu opposition, to betray his voters and join Netanyahu’s government without resorting to coronialist rhetoric. Gantz has now agreed to play second fiddle in a coronial “emergency government,” which will save Netanyahu (for the time being) from his corruption trial, while emboldening the prime minister to make constitutional changes that further bolster governmental power. 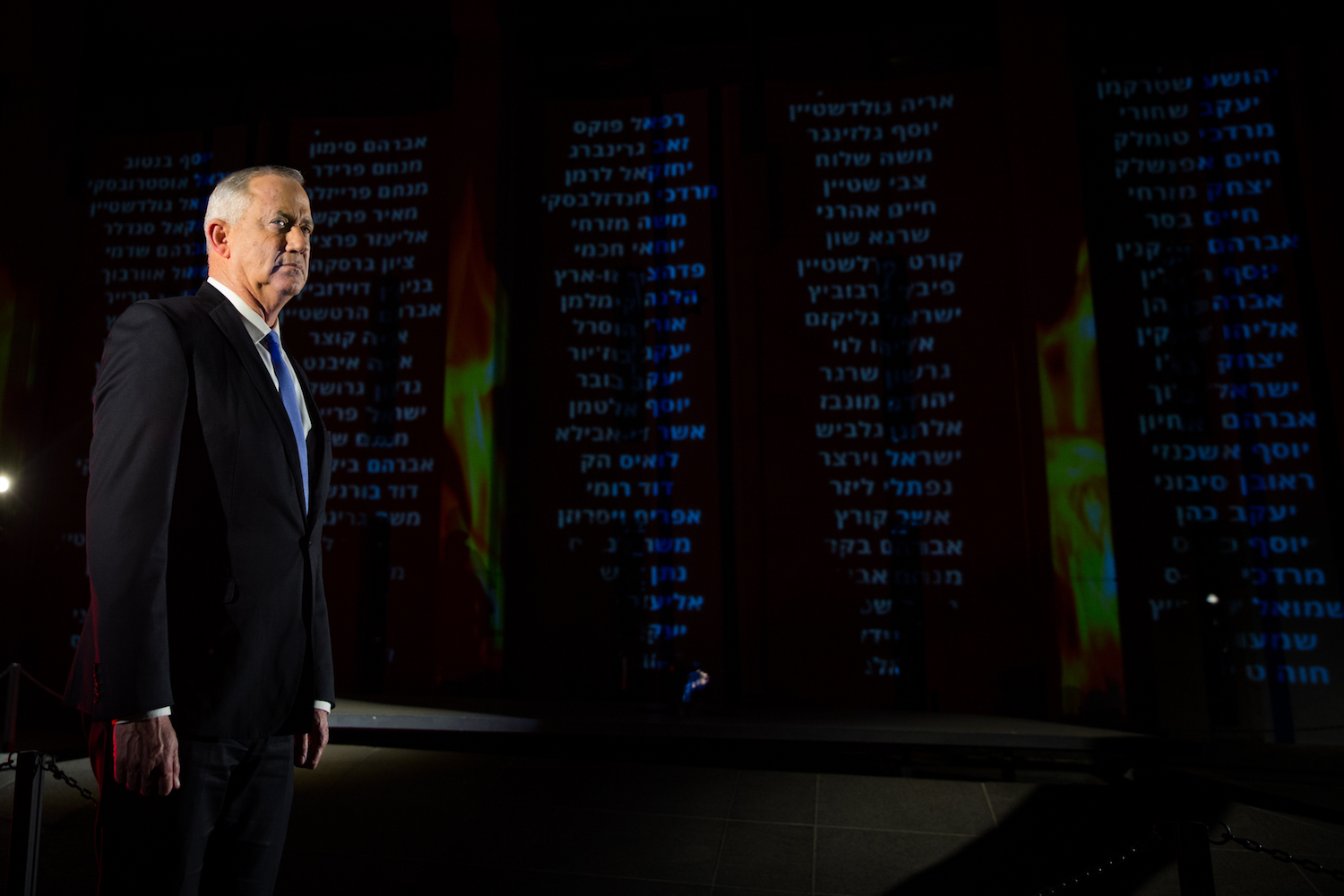 Benny Gantz attends a Memorial Day ceremony at the Knesset on April 21, 2020. (Flash90)

To be sure, the global coronial order is still in the making. In the short and medium term, the regime is building the foundations of a new “emergency routine” based on a number of new realities. For one, the failure of market forces has been resounding, shedding new light on the inability of neoliberal capitalism to deal with lesser crises, such as rising housing prices or the decline in quality of education.

Meanwhile, globalization has been slowing down considerably while the putatively weakened nation-state is returning to center stage. Governments are quickly falling back to their old habits of inciting against migrants, imposing harsh border controls, forcing strict limits on movement, introducing intrusive surveillance measures, and putting into motion the rapid centralization of powers. Spatially, life is being reformatted, with new patterns of social distancing and digital communication changing our everyday reality.

Yet, when it comes to the long term, matters are far less clear, which is precisely why we must treat coronialism as an opportunity for struggle. After all, hegemonic forces have been quick to change the rules of the game in their favor.

Politically, this has included the bypassing of democratic institutions, the bolstering of unchecked executive powers, and new emergency regulations. When it comes to the economy, governments around the world have launched unprecedented fiscal and monetary stimuli directed primarily at supporting financial markets. It is already clear that most of these new arrangements will mostly go to helping prop up corporations and industries, while leaving behind the marginalized who are now even weaker, stripped of their jobs, and dispossessed of social services. These policies will particularly affect labor migrants, temporary workers, small business owners, and the newly unemployed.

On the other hand, now that decades of “small government” and “neoliberal” policies have been exposed for their irresponsible neglect, we have begun to witness a new hunger for alternatives that will ensure public (state, urban, communal) provision of essential services. This applies, first and foremost, to health, but also to transportation, housing, the environment, and education. The coronavirus crisis has laid bare the fundamental problem of privatizing and distributing these services according to profit, while giving us a glimpse of how unequipped capitalist societies are to deal with nightmare scenarios such as climate change or a potential world war.

In this light, the link between coronialism and colonialism goes beyond phonetics. History warns us against oppressive forces exploiting “emergencies” for the purpose of seizing power and resources. In Israel-Palestine, this has already become a reality, with business elites and the Finance Ministry already pushing for “painful cuts” (in other words: the transfer of resources from poor to rich, from the public sphere to private hands, and from minorities to the majority). At the same time, the state is “importing” severe measures used against Palestinians in the occupied West Bank in order to govern Jewish citizens inside Israel. 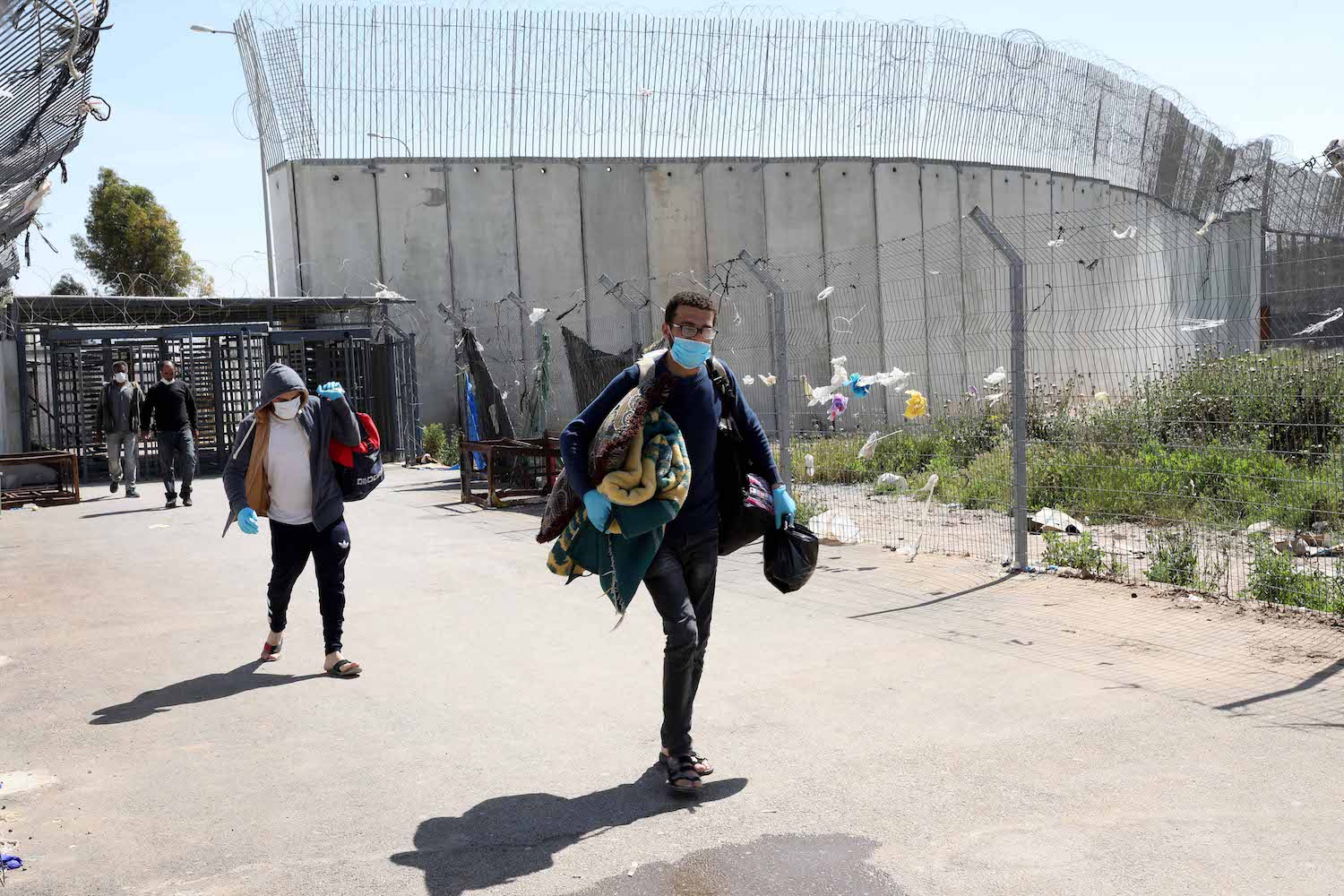 Palestinian workers cross back from Israel at a checkpoint at Mitar, near the West Bank city of Hebron, April 23, 2020. (Wisam Hashlamoun/Flash90)

Meanwhile, Israel’s far-right pro-apartheid bloc, which has ruled Israeli politics in its current composition for the past five years, hopes to use the new “emergency government” as a vessel for unilateral annexation of large parts of the West Bank. Such measures will turn Israel into an official apartheid state, with open contempt for Palestinian rights and international law. Here the coronial and the colonial merge, creating a dangerous change in direction for both Israelis and Palestinians.

Democratic forces must realize that the period ahead will be a long and bitter struggle to shape the nature of the coronialist order. We must be aware of both the dangers and potential for positive change in this fragile time. We should learn from the failures of previous campaigns, most notably the Second Intifada and the 2011 social protests, neither of which established a multi-group movement for progressive change in Israel-Palestine. We must work to unite the interests of many sectors and groups that can rally against apartheid and privatization, and for equality, accessibility, and democracy.

The long path to building those alliances begins with genuine and equal partnership between Jews and Arabs inside Israel, as well as with Palestinians in the occupied territories, while remembering that we all live under the same regime, whether directly or indirectly. These partnerships will expose the real goal of the current regime, which is to strip millions of their political and social rights and establish an undeclared apartheid regime under the guise of an “emergency.”

We must find new spheres — in neighborhoods, towns, and cities on both sides of the Green Line — where we can work together to build a just society. A society based on such principles would be more stable and resilient for future health, environmental, political, and economic crises that are inevitable in the post-coronial period ahead.

Prof. Oren Yiftachel teaches political geography and urban studies at Ben-Gurion University. He is a social activist and a co-founder of the peace movement Two States, One Homeland. This article does not necessarily represent the position of BGU.