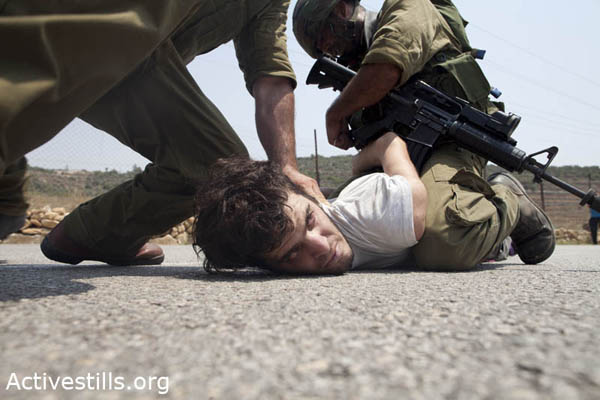 One of the detained Israeli activists. Photo by Oren Ziv/ activestills.org
According to media reports carried by all major news outlets in Israel, four ‘air flotilla’ passengers were arrested/detained Saturday in the West Bank village of Nabi Saleh during an unarmed demonstration this morning. Haaretz, in its headline story, is citing reports by Channel 10 (Heb), that four ‘air flotilla’ activists have been taken for questioning after they had been arrested in the demonstration. The Jerusalem Post, citing unnamed ‘organizers’, claims that air flotilla passengers are clashing with security forces in Nabi Saleh. The paper does not cite the name of the organizations that the ‘organizers’ are representatives of. Ynet is reporting that activists might be involved in demonstrations in Nabi Saleh and Qalandiya  but they provide nothing to substantiate their claims. None of these reports seem to based on facts on the ground in Nabi Saleh.

Kobi Snitz, an Israeli activist with the Anarchists Against the Wall, told me by telephone from Nabi Saleh that he has not seen any ‘air flotilla’ passenger in the course of the day. He told me that four people were indeed arrested, but they were all Israeli Jews from Tel Aviv. In fact, the Israeli activists are being charged with assaulting soldiers despite clear video footage to the contrary according to Snitz. Snitz did comment that there were international activists present in the demonstration but ‘they were definitively not arrested or taken in by Israeli forces.” Other villagers in Nabi Saleh told to me that they were unaware that ‘air flotilla’ passengers were present in their demonstration today. I have not been able to reach anyone present at the Qalandiya demonstration at the time of this writing.

News outlets often make mistakes and +972 is no exception. However, it is strange for a story that is based almost entirely on unsubstantiated reports to become the headline of every major newspaper website in Israel. When rumors of arrests of air flotilla passengers began this morning, Yossi Gurvitz contacted the IDF spokesman for a confirmation of the story. He was given a categorical rejection of claims that air flotilla passengers were targeted for arrest in the West Bank. No comment was given about air flotilla activists involved in demonstrations in Nabi Saleh.

[youtube]http://www.youtube.com/watch?v=k0D0yyoTqs8[/youtube]
So where did this rumor begin? Some air flotilla passengers were able to enter Israel yesterday (see above video) despite public statements by the Israeli government that they would stop them. Perhaps, an editor at Channel Ten thought it logical that air flotilla passengers would run to demonstrations in Nabi Saleh as soon as they arrived. Ultimately, we will never know where this story came from but it is illustrative of a bigger problem in the Israeli media. Namely, rumors and reports with no sources are all too often accepted as fact and reported as such.
UPDATE: The Jerusalem Post has changed its headline from Nabi Saleh to “Bil’in and Qalandia.” I expect that others will follow suit in the coming hours. The Jerusalem Post does not mention that the story has been updated or that its previous version was based on unsubstantiated rumors.  The story still has value in terms of the process by which the Israeli media qualifies information fit to print.