Yes, the suggestion to segregate buses is disgusting. But it shouldn’t overshadow the fact that, if we consider Israel/Palestine as one continuous territory under a system that privileges Jewish Israelis, there is already de facto bus segregation on the ground in occupied East Jerusalem and the West Bank. 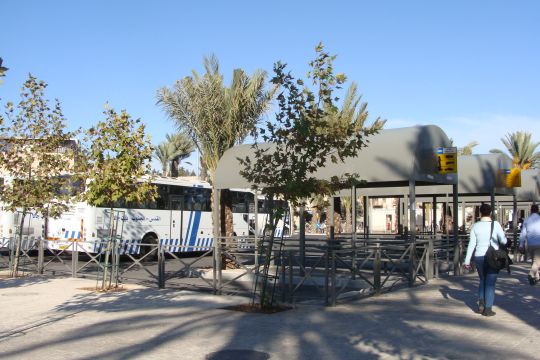 One of the three large bus terminals in East Jerusalem that serve Palestinian residents. From this station, lines head to Sur Bahir, Atarot, and elsewhere. Sur Bahir is a Palestinian village of East Jerusalem, which Israel unilaterally annexed after the Six Day War in 1967. Palestinian residents pay taxes to Israel like Jewish Israelis but have a special bus to the area. Atarot is also occupied land and a large industrial park is found there, where many of the businesses are Jewish-owned. Yet Palestinian workers take a separate bus line to Atarot from their Jewish bosses and coworkers.

No, I’m not Palestinian. But I experience this segregation every day because I work at a Palestinian university in Area B. Every morning, I make the trip to East Jerusalem, where I head towards the “Palestinian buses.” Sure, there are Israeli buses that head into the West Bank, too. But they only serve the settlements. They do not serve all of the people who are under Israeli control.

And no matter where one lives in the West Bank, Israel is in control. Israel controls the borders, the water, the air space, and the checkpoints—including the one that my bus passes through every day.

Many of the people on the bus with me are Jerusalem residents. This means that they pay taxes to the Israeli authorities. Or, if they’re students—and most of the passengers on my line are—their parents pay taxes. Despite the fact that they pay into the same system as Jewish Israelis, the transportation system available to Palestinian residents of Jerusalem take into the West Bank is separate and unequal from the one that Jewish Israelis take into the West Bank. 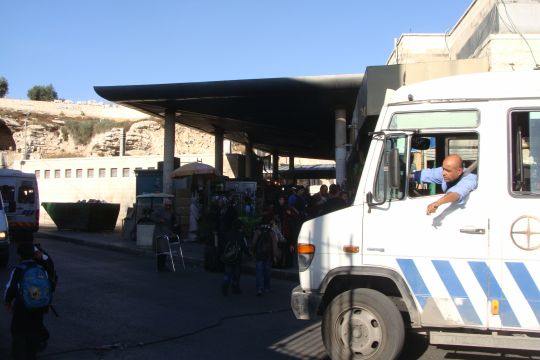 Outside of one of the entrances of the “Central Bus Station” in East Jerusalem. The driver hangs out the window to make sure there are no children crossing in front of the small bus.

It starts with the station itself. While the Arabic and Hebrew signs say that it’s the “Central Bus Station,” East Jerusalem’s tachana merkazit bears little resemblance to the one Israeli settlers use to go to the West Bank. That Central Bus Station, which is located in the city center, is indoors. It is air-conditioned in the summer and heated in the winter. It’s clean.

In East Jerusalem, a lone street sweeper does his best to keep the Central Bus Station clean. There is an overhang to protect passengers from the rain as they wait for the bus. But the station is open otherwise—hot in the summer, cold in the winter. 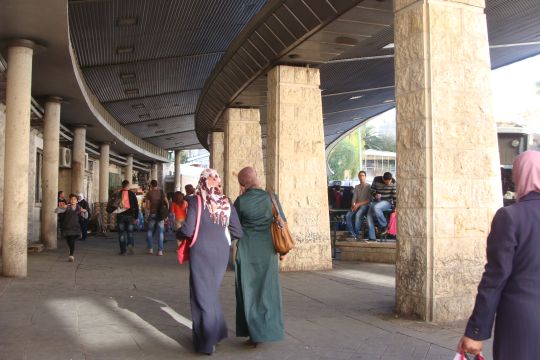 The “Central Bus Station” in East Jerusalem where Palestinian residents of Jerusalem catch buses to the West Bank, including the line I take to Area B.

While Israeli buses destined for the West Bank leave on schedule regardless of whether or not they’re full—because they’re heavily subsidized—the Palestinian buses have to wait until there are enough passengers on board that it’s worth it. This can make punctuality difficult. It also adds extra time onto the trip. As the bus to school leaves when it’s full, I get there early so I don’t miss it. A handful of students and I usually end up sitting half an hour.

And say there is a strike at the university but a small number of students still want to go to class. Since a majority isn’t going, those students usually find that their bus line to the school is cancelled for the day, so they have to find an alternative way to get there.

I cannot imagine an Israeli bus headed to the West Bank simply shutting down for the day because there aren’t enough passengers. In fact, when I reported on Israeli settlements for Al Jazeera, I took a bus out to the West Bank that was half empty.

So, when the Palestinian bus is full, it heads out, making its way through East Jerusalem, past bus stops where Jewish Israelis who are also West Bank-bound stand, waiting for their separate lines. At a red light, we might even be next to one of those Egged buses, full of Jewish Israelis. It’s odd for me, as a Jewish Israeli myself, to look out the window of the Palestinian bus—where the driver is listening to Arabic news or music—and into the Israeli bus, to know that we’re all headed in the same general direction, that the people are right there, just a car over, but that none of us can touch each other. We’re in glass and steel cages to make sure that our separation from one another is absolute.

And the two separate and unequal lines enter the West Bank, passing settlements, and then they split as the Palestinian bus heads towards Area B. There’s the illusion of autonomy, save for the occasional Hebrew road sign. But it doesn’t last for long—while Area B is under Palestinian administration, it is also Israeli security control and Israeli soldiers and military jeeps are a common sight here. The army can “serve” the area. But the bus lines can’t.

Coming back in, segregation hits home again. As settlers and Egged buses fly through the checkpoint, an Israeli child-soldier uses his gun to wave the Palestinian bus over to the side. The passengers, myself included, get down and file into a cage reminiscent of something sheep would be herded into as they were lined up for slaughter. Israeli border police check the empty bus, and then check IDs of the tax-paying East Jerusalemites as they board.

I remembered that segregation is the norm recently when, as I flashed my teudat zehut, a soldier-girl realized that I was a Jewish Israeli. “What are you doing here?” she whispered to me, in Hebrew. I guessed that she worried that the Palestinians might hurt me if they knew my status.

She hesitated, staring at my ID. She couldn’t seem to wrap her head around the idea that there would be a Jewish Israeli on the Palestinian bus.

“I teach at the university,” I continued. “I go through this checkpoint every day.”

She glanced at the girls in hijab behind me and leaned close to me. “Take care of yourself,” she whispered.