On Friday, the weekly demonstration in Kufr Qaddum was subject to successive volleys of tear gas attacks as the Israeli army entered the village. Several protesters were injured in the process, including one man who suffered a direct hit to the back of the head from a tear gas canister. He remains hospitalized.

In light of the current situation in Gaza and the south of Israel, there was visibly a smaller presence of press at protest sites. Some activists had feared that this factor would invite the Israeli military to be more heavy handed in its policing. 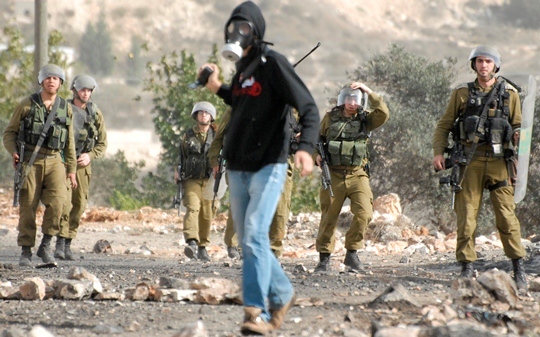 Iyad, a resident of Qaddum, made it clear that while Friday’s demonstration was part of a weekly response to local Israeli army policies, “more people have come out today than usual in order to show solidarity with Gaza and its people.” As Israeli soldiers entered the village, protesters could be heard shouting chants in solidarity with Gazans.

As of ten years ago, the main road leading in and out of the village of Qaddum was blocked by the Israeli army. The road was reportedly closed in order to prevent Palestinian traffic from driving past the neighboring settlement of Kedumim. After years of court-based appeals and various other political efforts, local residents have resorted to weekly demonstrations in a bid to force the army to reopen the road. 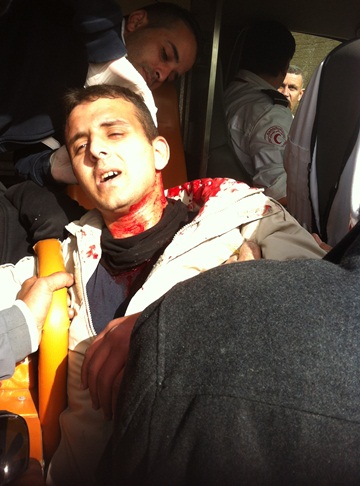 Yusuf Saba, 26, receives treatment after being hit in the head by a tear gas canister. November 16, 2012. (photo: Alon Aviram)

Volleys of tear gas canisters were fired into the village as people protested on the blocked road. As soldiers advanced, forcing the crowd to run back into the village, one young man was knocked to the ground by what was likely a rubber bullet. Another resident, Yusuf Saba, 26, of Qaddum, was hit in the back of the head by a tear gas canister. A local ambulance crew were quick to respond and worked to stop the blood flow. He remains hospitalized in Nablus.

Soldiers are temporarily chased out of the village of Qaddum, Nov. 16,2012. (photo: Tal King)