Joining other West Bank villages such as  Bil’in, Ni’ilin, Ma’asara, Nabi Saleh, Beit Umar and Walajeh – where demonstrations have become part of daily life –  the residents of A-Dik invited Israeli activists to join them in first unarmed, popular, demonstration against the occupation held Friday

“This is a non-violent demonstration!” the protestors cried out, their hands raised in the air. “Then don’t take another step!” answered the soldiers, seconds before they hurled stun and tear gas grenades into the crowd – and stormed forward.

The residents of A-Dik waited a long time before deciding to begin demonstrating in their village. Located in the Salfit district of the West Bank, their village has in recent years been subject to all sorts of occupation troubles. It was already about ten years ago that the army blocked the junction connecting A-Dik to the closest highway (446), forcing them to travel the longer path through the neighboring village of Burkin to get to that very same road. Every now and then the villagers take down the cement blocks on the road, and after a couple of day the army puts them back. That’s just the way it is.

On the opposite side of that very same road two Israeli settlements have been built on Palestinian land: Aley Zahav and Brukhin. In between the two there remains a certain agricultural area that the village still uses. However, Israel defines these as “state-owned lands,” and recent construction of a new settlement is underway, connecting the two older settlements and forming a barrier between the Palestinian villages and the lands beyond.

Judging by other similar situations, one can assume that it is by no coincidence that this barrier of settlements corresponds perfectly with the planned route of the “separation fence” in this region. Deep inside the West Bank, in complete opposition to The Hague ruling on the fence and even to stated US policy, Israel is building what has become known as the “Ariel Finger” – essentially annexing a huge chunk of Palestinian land. Construction of the fence is slated to begin this year.

And so, the people of A-Dik decided to take it to the streets

It’s little after noon on Friday, and in the small square between the mosque and the municipality, people are beginning to gather, unfolding their Palestinian flags, and talking about the struggle they have launched in the last weeks. Every Friday for the past two months, one of three locations is chosen for the demonstration: either the road block, the route of the fence where it comes closest to the houses of the village, or the new settlement. This week it is decided to aim for the road block.

For the next two hours, some 150 locals and 15 Israelis and internationals were partaking in the action. Marching through the village people are waving their flags, and the young chant slogans. The demonstration then gets to the road block near road 446, where armed soldiers and border policemen are already waiting with barber wire stretched thirty meters in front of them – signaling that this is as far as the demonstration is permitted to proceed. 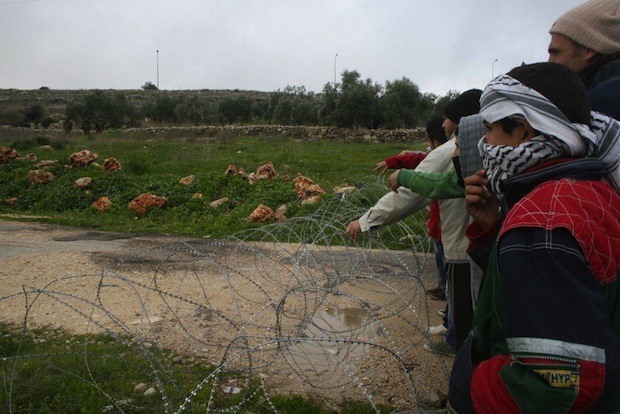 This is a trying point. At first the demonstrators gather near the barbed wire, examining the soldiers’ body language. The older activists tell the others not to throw anything, raise their hands in the air and tell the soldiers that this is a non-violent demonstration. The soldiers only reply that if the Palestinians want to keep things non-violent, they should stay on their side of the wire.

This apparently does not convince anyone, and the demonstrators start pulling at the wire. Eventually it is removed from the road, and – cheering – the people march several meters forward before the soldiers charge towards them. Within two minutes they showered the demonstrators with stun and tear gas grenades, attempted to arrest a Palestinian and succeeding in arresting an Israeli. The activists retreat.

Ten minutes later and the demonstrators regroup in the center of the village. The older activists decide to head on home, and the young go off throwing stones at soldiers and dodging tear gas grenades near the route of the fence. When the rain starts pouring both sides call it a day. The arrested Israeli activist will only be brought before a judge in court the following evening.

The building of a partnership

Bil’in, Ni’ilin, Ma’asara, Nabi Saleh, Beit Umar, Walaja – in these villages and others the popular and joint struggle has become a tradition, a part of life, with weekly demonstrations that have been going on for years. You know what to expect when you go to one of these villages – who the people will be, what the atmosphere will be like, and what kind of confrontation to expect with the armed forces.

This kind of certainty vanishes when one visits a village that is new to the struggle, such as A-Dik. Perhaps the most interesting thing that one gets to see in these places is how the dynamic of Palestinian-Israeli cooperation is being built, as for most locals (mainly the young participants) – the demonstrations are the first chance to ever meet Israelis who are neither soldiers nor settlers. This meeting involves an attempt at finding a common language, and at gradually getting to know one another  – but it also includes moments of crisis.

On one occasion during this specific demonstration, a young Palestinian started yelling at one of the Israeli activists, accusing him of being an undercover agent. It took a long and tense couple of minutes to calm his fears. Later, two other youths were debating whether they were fighting Israel as a whole – or just the government, the army and the settlers. The Israeli activists’ presence strengthened the case that not all Israelis are the enemy.

This process of redefining the “us” and the “them,” the “comrades” and the “enemy,” is very similar to that which Israeli activists experience as they join the Palestinian struggle. I remember very well how the mere encounter and the joint action broke my own instilled racism, and allowed me to believe in a better and more decent future for all the people on this land. It is one of the most beautiful aspects of the popular, joint and unarmed struggle taking place in Palestine – and it’s a pleasure to see it happening time and time again. Right now, it’s happening in the village of A-Dik.