The municipal council of Qarawat Bani Hassan was not warned that their water supply was going to be nearly shut off for days, and attempts to get answers from Israel, through the Palestinian Authority, did not bear any fruit. 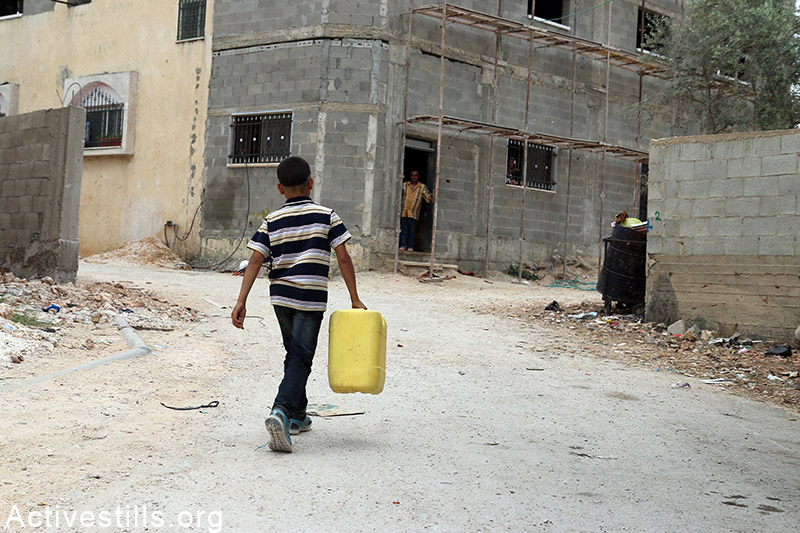 Last Wednesday, without any prior warning, the majority of houses in the West Bank village of Qarawat Bani Hassan, near Salfit, woke up to find that they had no running water. Municipal workers checked the village’s main water valve, located on Road 505, a few meters from the illegal Israeli settlement outpost of Ma’ale Israel.

“We discovered that the main water valve was almost shut off, [and locked in place] with a lock and chain in order to limit our portion of water and prevent anyone from increasing it,” said Hosam Asem, the manager of Qarawat Bani Hassan municipal council.

“We contacted the Israeli side through the Palestinian authority but we didn’t get any answers or explanations for such a step,” He added. “It’s odd that the Israelis didn’t inform us beforehand.” A Palestinian man checks the main water valve, now almost closed by Israeli authorities, in Qarawat Bani Hassan village, near Salfit, West Bank, May 23, 2015. According to the municipal council of Qarawat Bani Hassan the portion of a each villager has decreased to two liters per day as the village receive only 97 cubic meters per hour. The municipal council said the Israeli authorities did not provide the village with answers regarding the situation. Ahmad al-Bazz / Activestills.org 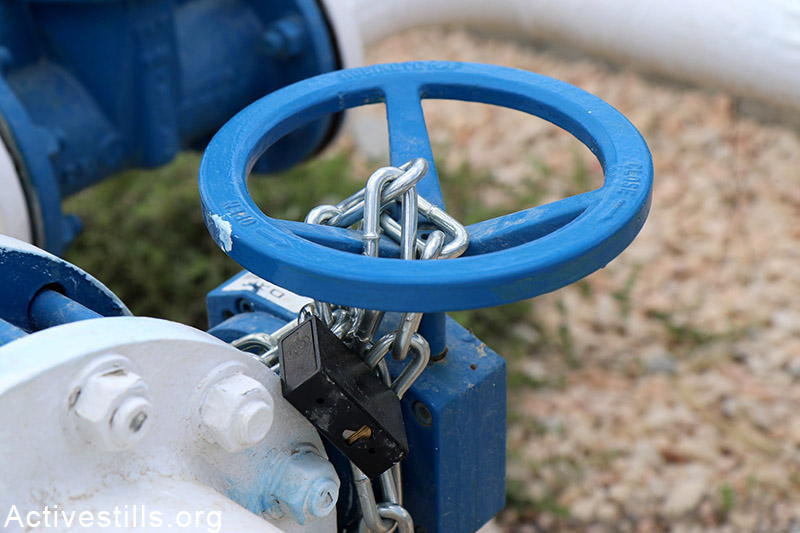 The main water valve of Qarawat Bani Hassan village, near Salfit, is seen largely shut by Israeli authorities limiting the water supply to the village and nearby villages, West Bank, May 23, 2015. Ahmad al-Bazz / Activestills.org

According to the municipal council, the supply of water for each villager has now been reduced to about two liters per day, as all of the neighboring Palestinian villages now receive a total of 97 cubic meters per hour. The four surrounding Israeli settlements, Barkan, Revava, Kiryat Netafim and Ma’ale Israel were reportedly not affected by the crisis.

Those villagers who own small water wells beside their homes decided to put them to use, while others were forced to buy water in tanks from other villages. After four days, 90 percent of the homes were back to being supplied with the normal amount of water. The remainder were still waiting a solution for their problem.

According to Ewash, Palestinians currently utilize no more than 10 per cent of the West Bank’s shared water resources, while Israel exploits the remainder. The coalition of 27 organizations working in water and sanitation in the occupied territories argues that under international law, the water resources should be shared equitably and reasonably by Israel and Palestine. The average domestic consumption rate for Palestinians living in the West Bank is 70 liters per day. The “absolute minimum” recommended by the WHO is 100 liters per day. In Israel, the average is 300 liters per day.