Only once Western democracies have committed their resources to ending the atrocities in Syria can they turn inward to rid their societies of the hate and bigotry that plagues them.

An ederly Syrian stands in front of her shelter in an informal camp for Syrian refugees in the Bekaa Valley, near the village of Jib Janin, eastern Lebanon, April 14, 2016. (Anne Paq/Activestills.org)

Words matter. Words help us understand the world we inhabit and shape our response to events far and near. Some refer to the events unfolding in Syria with the words “civil war.” These words, carefully selected by policymakers and politicians aim to prevent us from crying out against the atrocities in Aleppo and Homs.

Civil wars are internal matters. So why should the UK or the U.S. or France intervene in an internal matter? Civil wars are also, by nature, violent and bloody. They see brother pitted against brother, father pitted against son and national leaders pitted against their own people. So what are we to expect but more bloodshed and more anguish? Lastly, civil wars can culminate in the re-birth of nations, as was the case in England and America. So why should we act to end civil wars when they are but transitional moments in a greater plot?

Carnage. Slaughter. These are words that more amply describe that which is occurring in Syria. A madman is throwing barrels of fire from the sky. A fanatical movement in enslaving women and beheading young men and an army devoid of reason is starving its own population by bombing aid conveys making their way to besieged cities.

And the enlightened world watches in apathy and boredom. Its leaders stand on the world stage and proclaim their commitment to end the carnage and slaughter. Yet only from the sky and only from high altitudes. 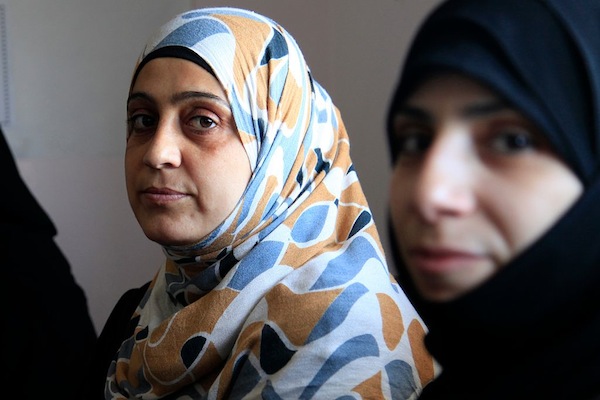 Women refugees attend a counselling session at a clinic near Mafraq in northern Jordan. (Russell Watkins/Department for International Development)

The problem with high altitudes is that from such heights all men seem like ants and all misery remains hidden.

By allowing this onslaught to continue for more than four years, Western democracies such as the UK, France and the U.S. have reached the final stop in what has been decade long journey — a journey that has seen these nations abandon their moral compass. Life, liberty, and equality are now but slogans carved in stone atop national assemblies or written on the back of bank notes.

It should not be surprising that these are the very countries that have witnessed the emergence of isolationism, populism, xenophobia and Trumpism, for nations that abandon their morals abroad will soon find these moral contested at home. The road to Brexit did originate in the mind of David Cameron, but rather in the acceptance of the military coup in Egypt, the abandoning of Libya following the fall of Qaddafi and the unwillingness to stop the madman in Damascus.

When President Obama took office he did not visit Jerusalem, Tokyo, or even London. Rather he flew to Cairo to address the Muslim world and seek “a new beginning” for Muslims and Americans. Four years later, weary from dealing with a region over burdened by history and faith, he decided to “pivot” toward Asia, thus turning his gaze from Cairo to Beijing.

Yet how can one pivot if he stands on shifting sands?

There are numerous reasons why one nation might come to the aid of another. Foreign aid, for instance, is not an act of benevolence but rather a form of mutual self-interest. And as history has taught us, dictators are often toppled not because of their brutal policies but because of their petroleum reserves. However, values and morals can also influence a nation’s foreign policy. A nation can come to the aid of another people when atrocities are taking place, when the sanctity of human life is violated, when crimes are perpetrated against entire populations. That is what is happening in Syria.

For Western democracies it is time to pivot back to Syria and commit all their resources to ending the atrocities taking place daily. This must be their highest priority, far above Asian markets or Brexit. For it is only then that the UK, France and the U.S. will be able to re-affirm their commitment to their most sacred values and rid their societies of the hate and bigotry that now plagues them.

Ilan Manor is a PhD student at the University of Oxford. His research focuses on on the use of digital tools in diplomacy. He blog on issues relating to diplomacy at www.digdipblog.com.