For Jews on board the US boat to Gaza, the Audacity of Hope, their decision to sail to Gaza was a concrete action marking their divergence from mainstream American Jewish allegiance of the Israeli policies. Jewish presence in the flotilla represents growing dissatisfaction among American Jews with Israel’s incessant willingness to monopolize modern Jewish identity. 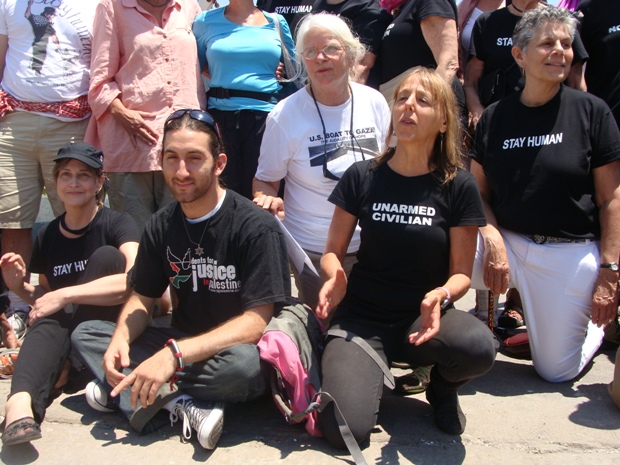 Participants of the US boat on the 2011 Gaza-bound flotilla in Athens, June 2011 (photo: Mya Guarnieri)

Over the past two weeks, American activists aboard the US boat to Gaza, dubbed the Audacity of Hope, have been engaged in nonviolence training, holding preparation meetings and speaking to the media about their mission to Gaza. Yesterday, their mission officially ended. The Greek government acting on the behest of Israel, stopped their boat, arrested their captain and ended their mission. Confident that they still won the public relations war, the emotional withdrawal from such an event will leave a lasting mark on many of the passengers. For the Jewish passengers on the Audacity of Hope, their convoluted relationship with Israel will continue to play a major role in their lives when they return to the United States.

The exhaustion of two anxious weeks of preparation was clear on the face of 74 year old Sante Fe resident Ken Myers as he talked about his Jewish background while on the lower deck of the Audacity of Hope, snacking on a freshly prepared Greek salad the night before the boat set sail. “For the most part, my family including my Israeli family have been supportive of my participation in this mission to Gaza.” He remarked as passenger chefs announced that everyone must take second portions of the salad since there is not enough storage space on board for leftovers. “I grew up in an extremely Jewish neighbourhood on the south shore of Long Island but my parents never forced Zionism on me even though my friends were all in Zionist youth groups.” Taking his last bits before handing over his plastic dish to the chefs he said, “I have come to understand that Zionism is simply incompatible with my version of Judaism.”

The Israeli government announced that it would seek a 10 year travel ban for all passengers participating in the Gaza flotilla for ‘illegally entering Israel’. Myers, visibly upset at the prospect of being banned from a country claiming to be his homeland questioned the rationale of the decision. “I am not traveling to Israel on this boat. I am traveling to Gaza and if Israel takes over the boat en route and claims that I illegally entered Israel despite the facts, well, banishment is the price I am willing to pay.”

As the Audacity of Hope left port on Friday afternoon, passengers embraced one and other triumphantly. Despite that the fact that they had not entered international waters and would surely be stopped by the Greek coast guard, many felt that their mission to confront Israel had succeeded when the boat left port. When Greek coast guard officials approached, their nonviolent trainers went into action, informing passengers to take  positions around the wheelhouse in order to protect the captain.

The initial excitement of the confrontation with the Greeks wore off as the evening approached. The passenger chefs prepared a dinner of pesto pasta as the defeat of their mission to Gaza set in. Some passengers remained upbeat even after it was clear that the boat would not travel to Gaza. Steve Fake, a writer and activist from New Orleans, remarked under the setting Athenian sun as the boat approached a military port, “just getting this boat to sea, even if it has only been for an hour, is proof that our mission of awareness has been successful.”

Standing on the docks of a Greek military port after the Audacity of Hope was stopped and its captain arrested, Richard Levy, a New York based lawyer, lamented the position of the Israeli government towards Gaza and its perceived support by Jews. “Just look at this boat and how many Jews on it have lost family in the Holocaust,” Levy continued between frantic phone calls with Greek lawyers about the legal situation of the US boat. “We think that we have a special responsibility to make it clear that AIPAC and the Israeli government, which describes itself as a Jewish state, do not speak for all the Jews. We are here to say that “never again” stands for all people, the Palestinians living under occupation included.”

The Jews on board The Audacity of Hope set out to challenge Israeli control of the Gaza Strip, at great personal risk, in part due to a version of Jewish identity which draws heavily on a history of persecution. Over the past two weeks, it became increasingly clear that their bold actions in defence of Palestinian rights were, in fact, born out of the difficult internal Jewish debates regarding Israel which plague Jewish communities throughout the diaspora. Many expressed their frustration with Israel, its policies towards the Palestinians and the general culture of acceptance for anything Israel does inside the American Jewish community. Quite simply, they wanted to replace fiery rhetoric– which has typified dinner conversations with AIPAC-supporting family and friends in the US– with concrete action.

Israeli attempts to paint flotilla activists as a violent threat to the national security of the state has only brought the efforts of these Jews more exposure. The flotilla may have been stopped from physically sailing to Gaza, but the damage it has inflicted on Israel’s position as the vanguard of Jewish identity has added dramatic new layers to a painful internal discussion already in motion.