Tent protesters have demanded time to address the issue of occupation as they push a social revolution for the full citizens of Israel. Hours before a series of major demonstrations throughout the country, I am re-posting a piece which I wrote earlier this week in the London Review of Books which raises the fundamental question; what about the occupation? 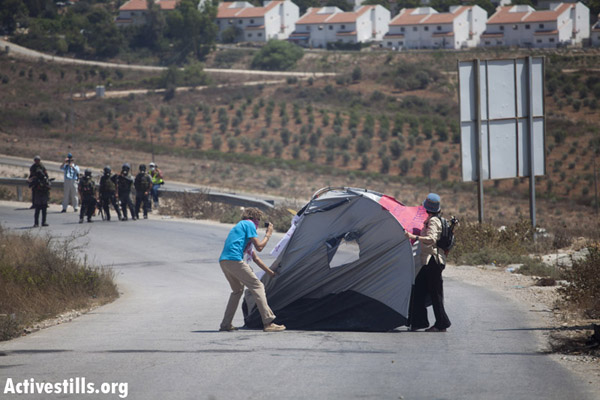 Protesters in the West Bank village of Nabi Saleh attempt to erect a tent on Friday 12 August 2011. Photo by Oren Ziv/activestills.org

Largely shielded from the European and American financial crises, the Israeli economy has been growing at an astonishing rate over the past five years: 4.7 per cent in 2010 alone. But the wealth isn’t evenly distributed: most Israelis living inside the 1967 borders struggle to make ends meet because of the high cost of living and relatively high taxes, which are largely spent on security and the occupation of the West Bank and Gaza.

Last month, a group of Tel Aviv residents in their twenties set up camp in the centre of Rothschild Boulevard to protest against housing costs in the city. They didn’t have a serious plan for political change, but the protest tapped into nationwide discontent. Within a few days, hundreds more people had joined them. The momentum spread quickly through the country, with camps appearing everywhere from Eilat on the Red Sea to Kiryat Shmona on the Lebanese border.

On Saturday, 250,000 Israelis marched in Tel Aviv and 10,000 marched to the prime minister’s residence in Jerusalem, demanding ‘social justice’. Netanyahu, the main target of the demonstrators’ placards, was quick to paint the protests as a misdirected reincarnation of the ‘radical left’. But this stale tactic didn’t stop an overwhelming majority of Israelis supporting the protests. According to recent opinion polls, 87 per cent see the demands for economic reform as legitimate.

The protester’s working definition of ‘social justice’, however, is unclear and full of contradictions. Most glaringly, they have yet to address the question of the Occupied Territories. From the start, organisers maintained that their protests were a rare instance of ‘apolitical’ social organising. The Palestinian issue was understood to be too divisive to be included under the umbrella of Israel’s social justice revolution, and there’s no doubt that, had protesters connected their struggle for social justice to the occupation, many fewer Israelis would have joined the protests.

The rights of Israelis, however, are inextricably tied with the rights of Palestinians, both inside the 1967 borders and in the Occupied Territories. The protesters, like most of Israeli society, are operating under the assumption that they are disconnected from the Palestinians who live under Israeli military occupation. But the fact is that one regime rules the land between the Jordan River and the Mediterranean Sea, and any discussion of the allocation of resources here, not to mention social justice, must take into account the rights of everyone who lives under the regime.

Despite the attempt to ignore the occupation, dozens of Jewish settlers from the West Bank descended on the protest camp in Tel Aviv last week. Carrying banners that say the solution to the housing problem lies in the West Bank, settlers have been shouting slogans against homosexuals and (non-Jewish) African refugees in Tel Aviv. At the other end of the camp, Jewish and Arab protesters have set up ‘Tent 1948’ to commemorate the dispossession of 750,000 Palestinians when Israel was created.

The protest as a whole will soon be forced to confront the question of the occupation. Last week the military announced that it will initiate a massive call up of reserves ahead of the United Nations vote on Palestinian statehood in September. Most of the protesters, young men and woman with reserve duty obligations, will have to decide whether to increase the pressure on the government by refusing to serve, or abandon their protest without having made any concrete gains. At the moment, the latter course seems more likely.