Israeli settlements enjoy preferential, subsidized budgets, and play an integral role in a system of segregation and dispossession. Who let them join the ‘March for Equality’ with Israel’s most underserved and disadvantaged communities? 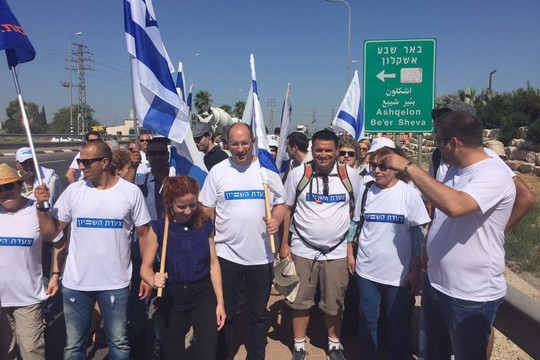 Members of Knesset Stav Shafir, Oren Hassan and others participate in the March for Equality, June 20, 2016. (Photo: Histadrut spokesperson)

Israeli social activists and local government leaders began a march on Jerusalem this week, the March for Equality, demanding equality in state funding for social and educational services in their underserved communities in Israel’s economic and geographic peripheries. As the marchers progressed along their way from the Negev desert to Jerusalem, they were joined by members of Knesset, the head of the country’s largest labor union, and others.

The struggle over education and welfare budgets for Israel’s disadvantaged communities is important and just. The idea of an inclusive march, which fosters unity among residents of dispersed peripheral communities is also great. Such a struggle is worthy of all of our support.

There is only one problem: the participation of settlers. Among the initiative’s participants, which include the mayors of two of Israel’s most impoverished towns, Rahat and Netivot (a Bedouin municipality and a majority Mizrahi town, respectively), were local government leaders from the Binyamin, Gush Etzion, and the South Hebron Hills settlements in the West Bank. The settler leaders did not come to express solidarity with Israel’s weakest communities, but rather to try and find room for themselves under the banner erected by neglected, downtrodden towns in the Israeli periphery.

And those are supplements to the settlements’ regular budgets. The Molad think tank pointed out this week that pre-schools in the Hebron hills settlements receive thousands of shekels more per child than those in Ashkelon and Ashdod, cities inside the Green Line considered to be in the periphery. Government grants for development, nutrition, and agriculture are larger in the settlements, Molad notes, and generally speaking the government invests 28 percent more per West Bank settler than per resident of the Galilee. (And that’s excluding the added costs of security spent on settlements in the West Bank.)

Another example: the Adva Center found that in 2014, local government spending per capita in non-Orthodox West Bank settlements was more than what is spent in the 15 municipalities considered economic giants inside the Green Line.

As Dani Gutwein has pointed out time after time, including in his video series “The Silver Platter,” the settlements are an alternative to the welfare state that Israel has created outside of its own borders. In the settlements housing is cheaper, state investment in construction and development is several times higher, and basic services like public transportation are subsidized at significantly higher rates. State services that are disappearing inside Israel are plentiful on the other side of the Green Line.

Equality under a military regime

On the most basic level, if approached without any context, we should be rejoicing that the government is still investing in characteristics of a welfare state, but that leads us to the second question: what place does the leadership of a privileged class in a racially segregated military regime have in a march for equality? By joining the march, the settlement leaders are trying to normalize their position in Israeli society, to present themselves as just another local government of Israeli communities, which just happen to lie outside of the state’s borders and is illegal under international law. They are trying to wash away the fact that their very existence plays an active role in the day-to-day dispossession of Palestinians and the perpetuation of dual legal systems — one for Jews and one for Arabs. (Read more on that here.)

While the mayors of Jewish towns in the Negev might be willing to march alongside the mayors of neighboring Arab towns Hura and Rahat, you won’t see the head of the South Hebron Hills settler council marching alongside Palestinian villagers from Susya, subjects of Israel’s military regime, and in whose they play an active role. By the virtue of their participation, settler officials have snuck a small asterisk onto the march’s banner equality, a footnote that says: “Equality, just not for Palestinians in the occupied territories.”

Head of the regional Shomron settlement council Yossi Dagan laid out that discriminatory approach quite clearly in an oped in Ynet Monday (Hebrew): “A child is a child, and he deserves equal opportunity whether he was born in Tel Aviv, Karnei Shomron, or Taibe.” (Karnei Shomron is a settlement in the West Bank and Taibe is an Arab town inside Israel.) Yes, there should be equality for children from Tel Aviv, Karnei Shomron, and Taibe, as far as Dagan is concerned; just not for children from Burkin, Nablus or Deir Istiya, Palestinian cities and villages that suffer on a daily basis as a result of the very existence of the settlement he heads — for some reason they don’t make the cut. That’s where Dagan draws the line, and takes the entire march for equality along with him.

So what exactly are settlers doing at at the march? They trying to buy some legitimacy for themselves. They are carving out alliances with social activists and mayors of actually underserved and discriminated-against communities, injecting themselves into a social struggle in an attempt to blur the lines between themselves and the actual economic and social periphery in Israel.

I wish nothing but success to the March for Equality — just do it without the settlers.