The chances I will be harmed in a terror attack are very low. A tiny fraction of one percent of Palestinians are involved in recent terror attacks against Israelis, and hardly any are citizens of Israel. 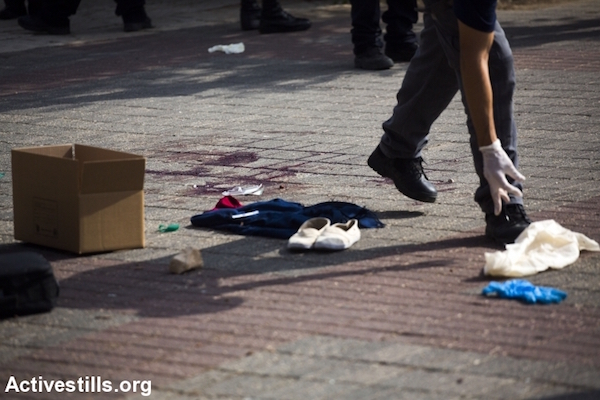 Israeli police at the scene of a stabbing attack near a Police station in East Jerusalem, October 12, 2015. A Palestinian teenager was shot and seriously injured after she allegedly carried out an attack that wounded two Israelis. (Anne Paq/Activestills.org)

Walking past Dizengoff Center in Tel Aviv recently on a crowded sidewalk full of jostling youngsters, I found myself imagining someone attacking me with a screwdriver. It had happened a few days earlier, about one kilometer away. I had a flash of alternate reality, imagining the sharp point digging into my back or side, and doubling over while catching a glimpse of a person running, being caught, pummeled or maybe shot as I fall. I wasn’t exactly scared but it felt detailed, almost physically real. Or maybe that’s what being scared is.

To rid my mind of the gruesome scenario, I considered the actual chances that it would happen.

I calculated. There have been eight Israelis killed in the recent wave of violence, which began on Rosh Hashana, just about one month ago. In 2015 so far, there have been 276 car fatalities, or an average of is 27.6 per month according to Israel’s traffic-safety advocacy group, Or Yarok. The monthly average will probably reach 28 by the time October is over. An Israeli is between three and four times more likely to be killed in a car accident than by a terrorist.

In addition, in the last two weeks, 92 Israelis were wounded, according to a tally published by Ynet a few days ago. That was before a false alarm about a terrorist on a crowded train led someone to pull the emergency break, causing some light injuries and great fear. The Israeli press reported that the injuries included panic attacks. Let’s approximate roughly 120 wounded, including those treated for panic episodes. That’s about .00144 percent of the total population of Israel, or one in every 69,167 people.

There have been about 27 such attacks against Israelis in the current wave of violence depending on exactly which incidents one counts: this includes 23 listed on Israel’s Foreign Ministry website, added to the stone-throwing death of Alexander Levlovich on the eve of Rosh Hashanah and three more from Friday. Since nearly all of them are “lone” attackers, we can count about 29 people – two of the attacks were perpetrated by two people – who attacked Israeli civilians and soldiers. The Henkin murders involved a cell. So let’s round the total up to 40.

Gaza and the West Bank contain about 4.5 million people. That’s one in 112,500 people who are involved in deadly attacks. Palestinians I’ve spoken to report that Hamas has been trying to foment violent action among West Bank Palestinians over the last year, without great success. After a year of trying, even a liberal estimate turns up only a few dozen people who have launched deadly Jewish Israelis.

Among Palestinian citizens of Israel, or Israeli-Arabs, two have been involved in this wave of violence, out of 1.7 million – not including any East Jerusalem attackers who may  turn out to have Israeli citizenship. Most East Jerusalemites are permanent residents and not Israeli citizens. As a percentage, Arab citizens participating in terror involve five zeroes after the decimal point — and the sixth digit is “1”.

I write this in no way to minimize each and every person harmed, killed, or even deeply shaken by proximity. The terrible feeling of being too close has stayed with me for 13 years, since the day a bomb went off a block away from me in Jerusalem. I am writing this as my small attempt to lower the level of panic, which is causing further damage in itself.

The vast majority of Palestinians, well over 99 percent, are not involved in the current deadly attacks.

Thirty-five Palestinians have been killed during this period, according to a report on Israel’s Army Radio at midday on Friday. Combining the different tallies available in news updates, about half were engaged in attacks – roughly 14 who committed or threatened a stabbing attack, and two used guns. The others, roughly 19, were killed during protests or while “disturbing the peace,” such as throwing rocks, maybe being near people who threw rocks or getting “too close” to the fence in Gaza. Palestinians, therefore, might logically conclude that Israel sees political protest and rock throwing as capital offenses, with no legal process.

The vast majority of Palestinian deaths, however, have not been perpetrated by Israeli civilians, fringe or otherwise, but rather by security forces. Data published by the New York Times on Thursday shows that even before the current round of violence, an average of nearly four Palestinians were killed every month between January and September of this year.