The candor and critical tone with which the Democratic presidential candidate discusses Israel and the occupation points to the start of a new era. Can the Palestinian struggle for justice find an ally in the American people? 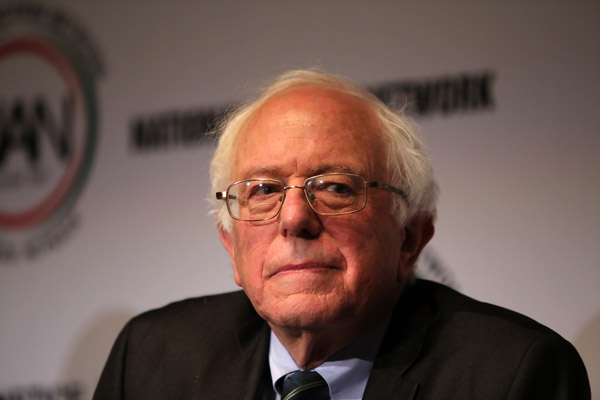 Bernie Sanders remarks on the last Israel attack on Gaza raised controversy and led to a series of angry responses by both the Zionist lobby in the United States and the Israeli public. His opponents took advantage of the fact that he mistakenly told the New York Daily News that 10,000 innocent Palestinian civilians were killed in the attack (despite Sanders clarifying in the interview that he is not sure of the numbers, and asked the interviewer to correct him if necessary). Many demanded that Sanders not only correct his mistake, but also retract his statement that Israel bombed Gaza indiscriminately, leveling entire neighborhoods, hospitals, and schools.

The important part of the story is not the mistake in the number of deaths, but the fact that a presidential candidate is criticizing Israel at the height of election season. This is no inconsequential matter, especially considering the influence of Zionist organizations in the U.S. and their involvement in electoral politics. These organizations are well-positioned in the American media and corridors of power, and it is clear to all that they are putting pressure on Sanders to toe the line and blindly support Israel.

There is also no doubt that Sanders is a supporter of Israel. In his youth he volunteered on a kibbutz. He repeats the holy mantra that Israel has the right to defend itself. And he declared his opposition to putting Israel war criminals on trial at the International Criminal Court.

Sanders, however, also refrained from attending the annual AIPAC conference, and has called for the evacuation of all settlements from the West Bank. On a number of occasions he has even said that U.S.-Israel relations should be influenced by Israel’s behavior toward the Palestinians and its stance vis-a-vis the desired outcome of a peace agreement — a statement so vastly different from all other American leaders, who have consistently emphasized their unequivocal support for Israel.

These remarks did not appear in a vacuum. During elections, presidential candidates are careful about making comments that might push away voters; Sanders’ comments show that he is aiming for an electorate that is against the occupation and the settlements, and views Israeli aggression with a critical eye. These opinions may have been pushed to the margins following the damage caused by the Oslo process, but today things are changing. Now the time has come to speak to the American public about the Palestinian issue using the language of human rights.

Sanders, 74, is considered a socialist according to American politics, and despite his age he has managed to rally millions of young Democrats behind him, who are crying out for a near-revolutionary change from the current situation. His campaign is based on opposition to Wall Street and the influence of capital on politics; the promise to take real steps against institutionalized corruption and social gaps; raising the minimum wage significantly; promoting free higher education; and expanding health and welfare services.

The Sanders campaign shows just how popular the concept of justice has become in the U.S. Faced with the right-wing and fascist extremism promoted by Republican candidate Donald Trump, an entire public is rising up and dreaming of a different tomorrow.

The movements against the Vietnam War and Apartheid South Africa, which were established by students and left-wing activists across university campuses in the 1970s, grew quickly and reached the heart of the American mainstream before they ultimately influenced policymakers. The Palestinian issue, on the other hand, has suffered from an overdose of diplomatic wheeling-and-dealing, and a lack of a popular struggle over the public consciousness.

Today there are serious signs that the U.S. public is ready for a solidarity movement on the Palestinian issue. Activities at universities are becoming extremely popular, and it looks like there is a chance to significantly lessen the effect of Israeli propaganda on the younger generation, while pushing for change among the American elites.

Sanders’ chances of winning are small, and he will surely be forced to moderate his positions under pressure. But there is a new generation in the U.S. that is interested in both social and worldwide justice. We must speak directly to Sanders supporters and work with them to create this change. Our aspiration for justice is the best tool we have to promote a solution to the Palestinian issue, and justice is the Palestinian people’s most loyal ally.

Jamal Zahalka is a member of Knesset and the chairman of the Balad party. This article was first published in Arabic on Al-Araby al-Jedid, and was published in Hebrew on Local Call. Read it here. It was translated by Nadav Frankovich.