From the church bombings in Egypt to the restrictions on movement in Palestine to an exodus from Iraq, Christians of most Middle Eastern countries are at serious risk. 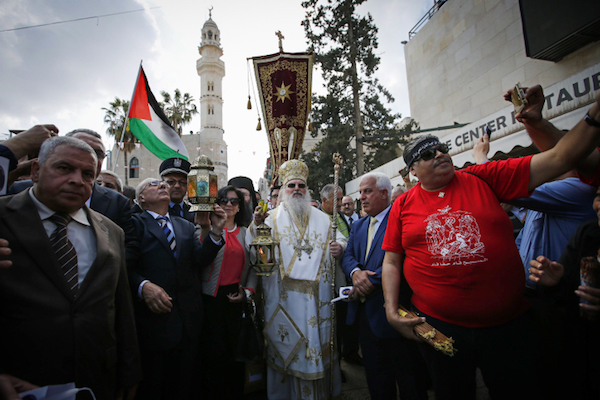 Orthodox Christians participate in a Holy Fire ceremony at the Church of the Nativity in the West Bank city of Bethlehem during the Easter Holiday, April 15, 2017. (Wisam Hashlamoun/Flash90)

This year there will no Easter celebrations for Coptic Christians in Upper Egypt. Out of concern for their security and out of respect for the 45 Christians who were victims of two horrific suicide bombing attacks on Palm Sunday, their bishop declared that Easter services would be limited in his diocese to mass, “without any festivities.”

That Holy Week began for Egyptians with news of those bombings served as a powerful reminder of the threats faced not only by Egypt’s Copts but by other Christian communities in the Arab World.

It is only in Lebanon where, both because of their numbers and the unique characteristics of that country’s political system, Christians live in relative security. But in Egypt, Iraq, Syria, or Palestine, 2000 year-old Christian communities are at risk.

The situation in Palestine is unique. There, Christians and Muslims alike, are being strangled by the harsh Israeli occupation. They’ve lost land, livelihood, and the freedom of movement. This Holy Week, for example, only with great difficulty will Christians from Bethlehem, Bir Zeit, or Ramallah be able to make pilgrimage to Jerusalem to walk the Stations of the Cross or to pray at the Church of the Sepulcher. Many Palestinians can see Jerusalem from their homes, but they are separated from the city by a 28-foot wall, restrictions imposed by occupation forces, and humiliating checkpoints. As a result of these near unbearable hardships, many Palestinian Christians have emigrated to the West causing a precipitous decline in their presence in the Holy Land.

The situation faced by Christians in Iraq and Syria is quite a different story.

In Iraq, the remnants of that country’s once thriving Christian church live in fear. Americans who only recently discovered Iraq’s ancient churches, do not realize that before the Bush Administration’s disastrous 2003 invasion, there were 1.3 millions in Iraq. Despite assuming some religious trappings, Saddam Hussein’s ruthless dictatorship was secular and, therefore, provided Christians some degree of religious freedom.

One result of the U.S. invasion that overthrew Saddam’s regime and the dismantling of Iraq’s state apparatus was to unleash a civil war of armed sectarian militias, a feature of which was the “ethnic cleansing” of entire neighborhoods of Sunni and Shia Muslims and, of course, vulnerable Christians—who had no militias to protect them.

During the first five years of the Iraq war, the Christian population of Iraq declined from 1.3 million to 400,000—with no one in the Bush Administration attending to their plight. Only with the emergence of bloody ISIS, did the West pay attention to the fate of Iraq’s Christians.

The Iraqi Christian hierarchy continues to urge those who remain to stay put, fearing that should their numbers continue to decline it could spell the end of their ancient communities. ISIS may soon be defeated and Christians and other minorities may receive protection in Ninewah Province, but fear remains and many are listening to the voices of despair suggesting that there is no future for Christians in Iraq.

The Syrian situation is a variation on this theme. The no less brutal Assad regime is also secular and has provided protection for that country’s Christian communities, earning it the support of many Christian leaders—who have a greater fear of both ISIS and many of the opposition Syrian militias who have an extremist sectarian bent. Most Christians have remained in regime-controlled areas, but they are concerned—caught between two evils and facing an uncertain future.

Egypt’s Coptic Church is the largest in the Middle East—numbering between 8 to 10 million. Despite their size or maybe because of it, they are vulnerable to attacks, especially with the unrest that has shaken the country during the past six years.

During the period of Muslim Brotherhood rule, Christians felt threatened by what they saw as an effort to politicize religion and Islamize the state, at their expense. In 2013, the military ousted the elected Muslim Brotherhood government resulting in bloody confrontations in which upwards of 800 Brotherhood supporters were killed. In response, violent extremist partisans of the deposed leadership took out their anger on the Christian community—in part because the Coptic leadership had joined with the Sheikh al-Azhar in supporting the military takeover, out of their fear of the direction Egypt was taking under the Muslim Brotherhood. During this time, churches were burned and Christians were brutally murdered and terrorized.

Since then, the government of President el-Sisi and the Sheikh al-Azhar have made significant gestures of support for Egypt’s Christians. Both have condemned the attacks and intolerance. They have called for and implemented a review of educational and other religious materials. The President has gone to Christmas mass for the past three years, and in two weeks the head of Al-Azhar will host a historic meeting in Egpyt with Pope Francis, as part of a conference on interfaith dialogue.

All of these constructive efforts, however, are in danger of being undercut by the government’s massive crackdown, not only on the Brotherhood, but on the Egyptian media and a number of human rights organizations and other secular political groupings. Tens of thousands have been imprisoned.

Instead of making Christians more secure, the arrests and pervasive climate of fear created by the repression have undercut efforts to promote tolerance and stability—with Christians being the “soft targets” for religious extremists.

The lesson should be clear. Repression may produce some short term satisfaction, but it doesn’t create the long-term conditions that promote the security and tolerance needed to protect vulnerable minority communities. Christians in Iraq and Syria may have benefited, for a time, from brutally imposed secularism, but the resentment that resulted from prolonged oppression unleashed a deadly extremist wave drowning everything in its wake.

The official U.S. reaction to the still unfolding tragedies facing the Christians of the Arab World is utterly frustrating. We never understood or even considered what would happen to Iraq when we foolishly invaded that country. And we still have no clue about the internal dynamics that shape the Syrian horror. At the same time, because successive Administrations can not even see Palestinian humanity, we maintain a disgraceful silence in the face of Israel’s strangling of the Palestinian people, both Christians and Muslims. And in Egypt we fail to caution the government regarding the potential consequences of their disregard for human rights.

The result is a record of disaster with the best evidence of this failure being the growing dangers faced by the region’s vulnerable Christian communities.