Simone Zimmerman’s appointment is great news for mainstream American Jews who are desperate for a real conversation on Israel/Palestine. 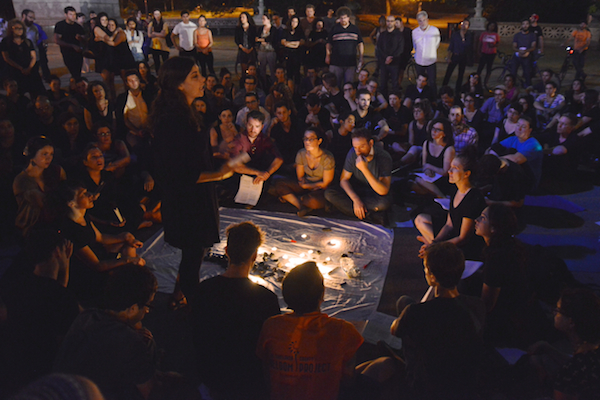 Simone Zimmerman speaks to some 250 IfNotNow activists at a Tisha B’Av action in New York City, where participants read the names of Israelis and Palestinians who died in the 2014 Gaza war. (Photo by Gili Getz)

Over the past few days, it has been difficult to watch the American Jewish establishment’s attacks on my friend, Simone Zimmerman. Just three days ago Simone was appointed the Jewish outreach coordinator for Bernie Sanders’ presidential campaign. Within hours of the announcement came a torrent of vicious attacks, both against her as well as the Sanders campaign for having the gall to appoint a critic of Israeli settlements and policies in the occupied territories. (Update: Just hours after publishing this post, the Sanders campaign suspended Simone from her position).

I have known Simone for years, and for years I have watched her unwavering dedication to the American Jewish community, whether through work at her synagogue in Los Angeles, trips to Israel, or leading trainings for young Jews. Her commitment to a people she loves always remained steadfast — even as her views on Israel began to shift away from that establishment, within which she was raised and first came up as a leader.

On the face of it, the criticism leveled against Simone by major media outlets and figures — including former head of the Anti-Defamation League, Abe Foxman, who called on Sanders to fire her — is the result of the severity of her criticism and her choice of words. But let’s be honest: it is neither Simone’s style nor choice of words that is rattling the establishment, rather it is the fact that it is not willing to make room for a leader who has no qualms openly stating that Jewish life is no more precious than Palestinian life.

Here is the lie the American Jewish establishment keeps telling itself: Simone and her ilk (in organizations such as J Street, IfNotNow, and others) are the voice of a minority that must be shut up and shut out of the American Jewish conversation. But sooner or later the old guard will have to contend with the fact that Simone isn’t a radical, and if she is she is not alone. She is the face of the new American Jewish mainstream — one that is no longer afraid of its own gatekeepers.

The old guard cannot handle an American Jewish mainstream that is desperate for a real, open, and sensible conversation about Israel/Palestine. But that’s just the thing — sooner or later Foxman will have to realize that his grandchildren’s generation is no longer interested in whitewashed conversations about the Middle East. It is a generation that holds tight to its Judaism, its rituals, its love for community, and its unwavering desire for justice. It is a generation coming up for air. Thank goodness Simone is making it a little easier for all of us to breathe.