The recent curtailment of the rights of Palestinian prisoners was presented by Israel as leverage designed to secure the release of Gilad Schalit. But Schalit has been released, while the sanctions remain. 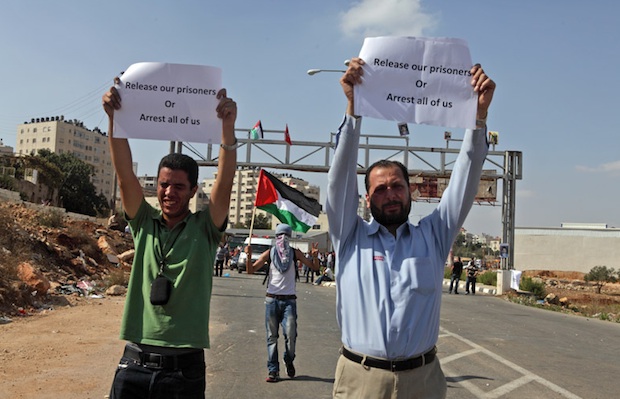 This past summer, somewhere around the fifth anniversary of Gilad Schalit’s capture, and several months before his release, Prime Minister Benjamin Netanyahu and the Israel Prison Service launched a new policy restricting the rights of Palestinian political prisoners (commonly known as “security prisoners”).

The new restrictions, on top of existing discrimination between criminal and political prisoners, included an increased use in the solitary confinement of prominent leaders; a ban on Arabic newspapers, books and television; a halt on the transfer of funds from family members to prisoners, necessary for many basic food products, cigarettes and more; and discontinuing academic studies of the prisoners in Israel’s Open University, which enables distance learning.

These steps were portrayed as acts of leverage against Hamas – pressure for the release of Schalit – and were the cause of a three-week-long hunger strike undertaken by more than 100 prisoners. The strike ended upon the release of Schalit, in exchange for several hundred Palestinian prisoners, as the rest of the prisoners hoped that the deal would also lead to the cancelation of the new sanctions.

Yet it wasn’t long before they realized that the new restrictions were there to stay. In response to a series of appeals to District Courts and the Supreme Court, filed in the last two months by prisoners and human rights NGOs against the banning of academic studies, the IPS has repeatedly declared that it has no intention of changing its new policy.

In one of these appeals, attorney Abeer Baker, representing a prisoner who had hoped to complete his BA studies in prison, claims that the IPS decision to ban studies solely from political prisoners should be considered an illegal form of cruel and unusual collective punishment. Baker says that out of 270 prisoners taking university courses, some 210 are Palestinian political prisoners (this out of a general prison population of around 19,000, more than 5,000 of whom are political prisoners). “Studying… is not only meant to put the prisoners’ time behind bars to better use, but is also helpful in changing their behavior, lowering violence, bettering their self esteem, and strengthening their connection to the outside world,” Baker writes.

Precedent demonstrates that “an individual’s basic rights ‘survive’ even from behind bars,” write the lawyers of the Association for Civil Rights in Israel, in yet another appeal. “Except for the prisoner’s freedom of movement, which is stripped of him, all other rights remain equal to those of any other person.” The ACRI lawyers add that the restriction on the education of Palestinian political prisoners must be canceled, as it constitutes discrimination between them and Jewish political prisoners: “IPS defines prisoners’ conditions in accordance with their ethno-national background. Need we say more to explain what is wrong with this policy?”

“We find that this fact speaks for itself”
The IPS response to these appeals, filed through the Attorney General’s office, offers a glimpse into a whole different philosophy on the function of punishment, in which a prisoner has no human rights at all, except for those defined in local and international laws. The IPS can only consider Palestinian political prisoners in this fashion, justifying treating them differently from “regular” prisoners.

“Security prisoners differ in essence from criminal, insofar as they act under the guidance of terrorist organizations, even within prison,” says the state to the court. “The state is obliged to give these prisoners all the basic rights given to other prisoners – but it is in no way obliged to offer them the privileges which it gives others.” And education, says the state, is no basic right, but rather a privilege.

Between its more principled arguments, one article in the state’s response is particularly odd: “We note that a review of the list of the most ‘popular’ courses amongst security prisoners reveals that one of these, undertaken by many prisoners, was ‘Genocide.’ We find that this fact speaks for itself.”

In reading this article, one cannot avoid asking what the Attorney General is trying to say in reporting this “important” fact so dramatically. Is it to say that the IPS suspects that the Israeli Open University is giving a course on how to commit genocide, which is what the Palestinians want to do to us? Is this, perhaps, the only argument in a 14-page legal document that tries to say that banning studies is actually a security measure? Surely the state knows, or can easily check, that this is a course that promotes the value of human life, and warns of the dangers and atrocities of war. Surely if there was any real danger in this course, the IPS could have just banned it, as it does with chemistry, computer science and others.

But this is exactly where the text speaks for itself. This short paragraph captures the absurdity of the rest of the text, in saying, “We know there is no justification for this – but we’ll pretend that there is,” or in other words, “We can do whatever we want, as we have the power, and they are the enemy.” This is the basic absurdity or impossibility inherent in the military court system, and in holding political prisoners in Israeli jails. It shows how the system cannot possibly treat human beings as such, with rights equal to their counterparts, and falls time and time again to see them as nothing more than “the enemy.” And it has nothing to do with genocide, and nothing to do with Gilad Schalit – it’s all about the occupation.