Two and a half years after the emergence of the protest movement that was celebrated as the birth of “a new Israeli left,” only a handful of demonstrators come to the East Jerusalem neighborhood each Friday. Solidarity activists claim that the battle has moved to other places, while local Palestinian residents fear the future, and wonder whether evictions will resume, now that the media attention is gone. 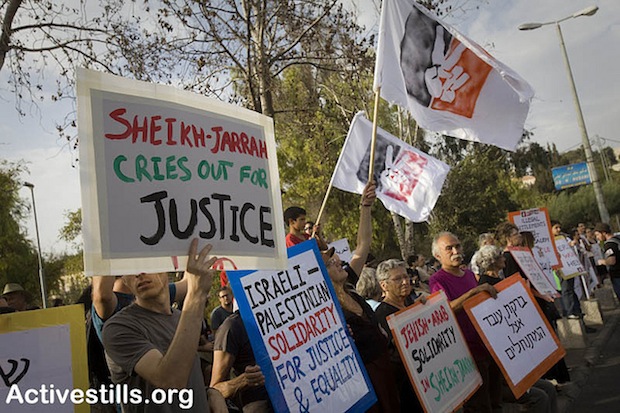 Just one year ago, the story of Sheikh Jarrah made it all the way to Washington, D.C., taking center stage at the annual J Street Conference, where leading members of the Israeli Solidarity movement were invited to speak to an audience of American Jews and D.C. policymakers about Israel’s discriminatory and repressive policies in East Jerusalem. The platform given to young Israeli anti-occupation activists arrested for protesting the evictions of Palestinian families from their homes was a strong indication of just how successful the protests that began in the fall 2009 had become in raising international concern over Israel’s policy of settlements in East Jerusalem. Americans, Israelis and the international media suddenly took notice of where Sheikh Jarrah was, and were talking about Israel’s responsibility in undermining a two-state solution by settling Jews in the heart of Palestinian East Jerusalem.

What began as only a handful of protestors, shortly after the Hanoun and Ghawi families were kicked out of their homes on August 2, 2009, became a weekly Friday ritual of several hundred people who came with a lot of energy: people held signs demanding Israeli settlers get out of the neighborhood; Palestinian residents made speeches; there were drum circles and people calling for an end to the occupation and slogans like: “Arabs and Jews refuse to be enemies.” There was the feeling that a new left in Israel was emerging.

As the protests became regular and increased in numbers, the Jerusalem Police began making arrests, sometimes of dozens of protestors at a time. In January 2010, the protests made headlines in Israel when the director of the Association for Civil Rights in Israel, Hagai El-Ad, was arrested, along with 14 other Israelis – only to be released hours later.

Israelis who had never even been to a protest beforehand were protesting in large numbers and getting arrested once the police decided it was enough. The Solidarity movement became a symbol of Israeli civil disobedience against settlements and the occupation – and the public discourse among the liberal community in Israel focused on the authorities’ violations of freedom of expression and the right to protest. At the height of its activity, there were several thousands Israelis and Palestinians protesting in Sheikh Jarrah, and prominent figures came through to show support, among them: Israeli novelist David Grossman, former Speaker of the Knesset Avram Burg, former US President Jimmy Carter and former Irish president Mary Robinson.

In recent months, if you go to Sheikh Jarrah on a given Friday afternoon, you will only see at best a handful of Israelis and Palestinians standing in the Sheikh Jarrah Park, down the road from the houses that have been inhabited by Jewish settlers. The presence there now resembles more of a vigil, like those of Women in Black in Jerusalem and Tel Aviv who have protested the occupation weekly for decades; a symbolic act instead of on-the-ground political action. 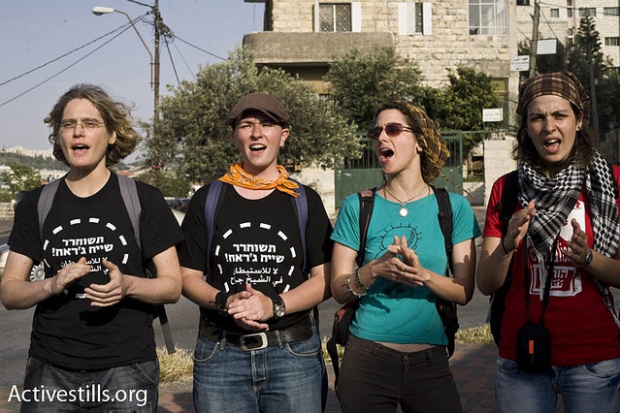 As of September 1, 2011, the Solidarity Movement decided to stop organizing protests at Sheikh Jarrah; the movement was no longer to be called “Solidarity Sheikh Jarrah” but simply “Solidarity.” According to a statement published on their website, the protests in Sheikh Jarrah reached their zenith and had exhausted their mission, since the takeover of Palestinian houses by settlers were either stopped or delayed by the courts, and the police had ceased entering the neighborhood and arresting residents. They announced that their activities would start taking on different models:

In the coming months, a series of activities in Sheikh Jarrah will replace the weekly demonstrations. We will conduct to tours of the neighborhood for the Israeli public, hold large-scale political and cultural events, and begin the construction of a permanent information center run by the neighborhood’s residents.

Although the information center has yet to be established, Solidarity activists continue to protest Jewish settlement, evictions and discrimination throughout East Jerusalem, in Silwan, where the City of David continues to operate, and in Issawiya, where a National Park is being built on private Palestinian land. Solidarity has become a national movement, which also operates in Arab-Israeli cities such as Ramle and Lod. In Ramle, Arab-Israeli families are under threat of eviction by Amidar, a public housing company owned by the Israel Lands Administration.

Solidarity has also set up activist groups in universities throughout the country that hold educational programs. A group of high school teachers identified with Solidarity participated in the letter to Education Minister Gideon Saar asserting they would refuse to take their classes to Hebron. It remains to be seen if those changes made the movement more effective and widespread, or whether the disengagement from the place in which the protest has started resulted in a blurring of the original message.

According to Solidarity activist Daniel Dukarevich-Argo, the protests were a success and remaining there was no longer politically effective. “The protests turned from something politically important to something much less significant. Throughout 2010 everyone who went there felt their presence was important – because of police repression and because of settler aggression, but the reality changed. We didn’t want to preserve the ritual for the sake of the ritual.”

While Dukarevich-Argo believes it was the right decision to move on and assures that if something in the neighborhood changes they will resume demonstrating, other Israeli Solidarity activists have a different take. They feel it was important to continue protesting in the neighborhood because of the significance of Sheikh Jarrah’s story and most importantly, in order to continue and show solidarity with the local Palestinian residents. Indeed, some Palestinian locals have expressed anger about the cessation of activity . In the absence of the Solidarity activists, a new committee of five members has been created to assume responsibilities for activities in the neighborhood. It’s this committee that is now responsible of the small vigils taking place every Friday. 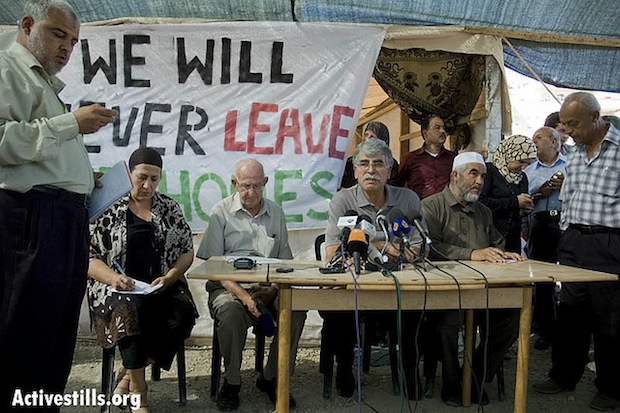 Palestinian families at a press conference in Sheikh Jarrah in late 2009 (Photo: Activestills)

In total, seven Palestinian families have been evicted from Sheikh Jarrah. Since November 2009, there have been no more evictions. However there are still several families stuck in a protracted legal battle with Israeli organizations over ownership of their homes.

According to Hatem Abo Ahmad, one of the lawyers representing the families in the neighborhood, there are 10 families still under threat of losing their homes. Abo Ahmad is not optimistic. The courts so far recognized Jewish claim for pre-1948 homes, while preventing the same claim from Palestinians who left West Jerusalem. Still, he told me that on legal grounds, many of the families have all the necessary documents to prove their ownership. Abo Ahmad also said that, the lawyers have acquired Turkish documents from the Ottoman period that provide further evidence of the families’ ownership claims. It has yet to be seen how these court proceedings, which could take years and years, will transpire.

Local residents feel that no one is talking about Sheikh Jarrah anymore. The Israeli and international media – which up until not so long ago, were preoccupied with Israeli settlement building in East Jerusalem and putting a spotlight on the joint efforts by Israelis and Palestinians to stop them – have moved to Iran.

At the largest policy conference on Israel in the United States hosted by the AIPAC lobby at the start of March, Prime Minister Netanyahu didn’t even utter the word Palestinian once. Although Israelis continue to join Palestinians in solidarity each week throughout the West Bank, the story of Sheikh Jarrah – where Israelis took a leading role in the protests –seems like a long lost memory.

Following the recent release of Just Vision’s new documentary “My Neighborhood,” which details the struggle of Palestinian families and Israeli activists against settlements in Sheikh Jarrah, +972mag is presenting a series of articles on the state of the protests, past and present. This is the first in a series.

For more information on the legal issue in Sheikh Jarrah, click here and here.