A year after the devastating war on Gaza, an activist visits human rights defenders still working among piles of rubble and roiling from trauma. 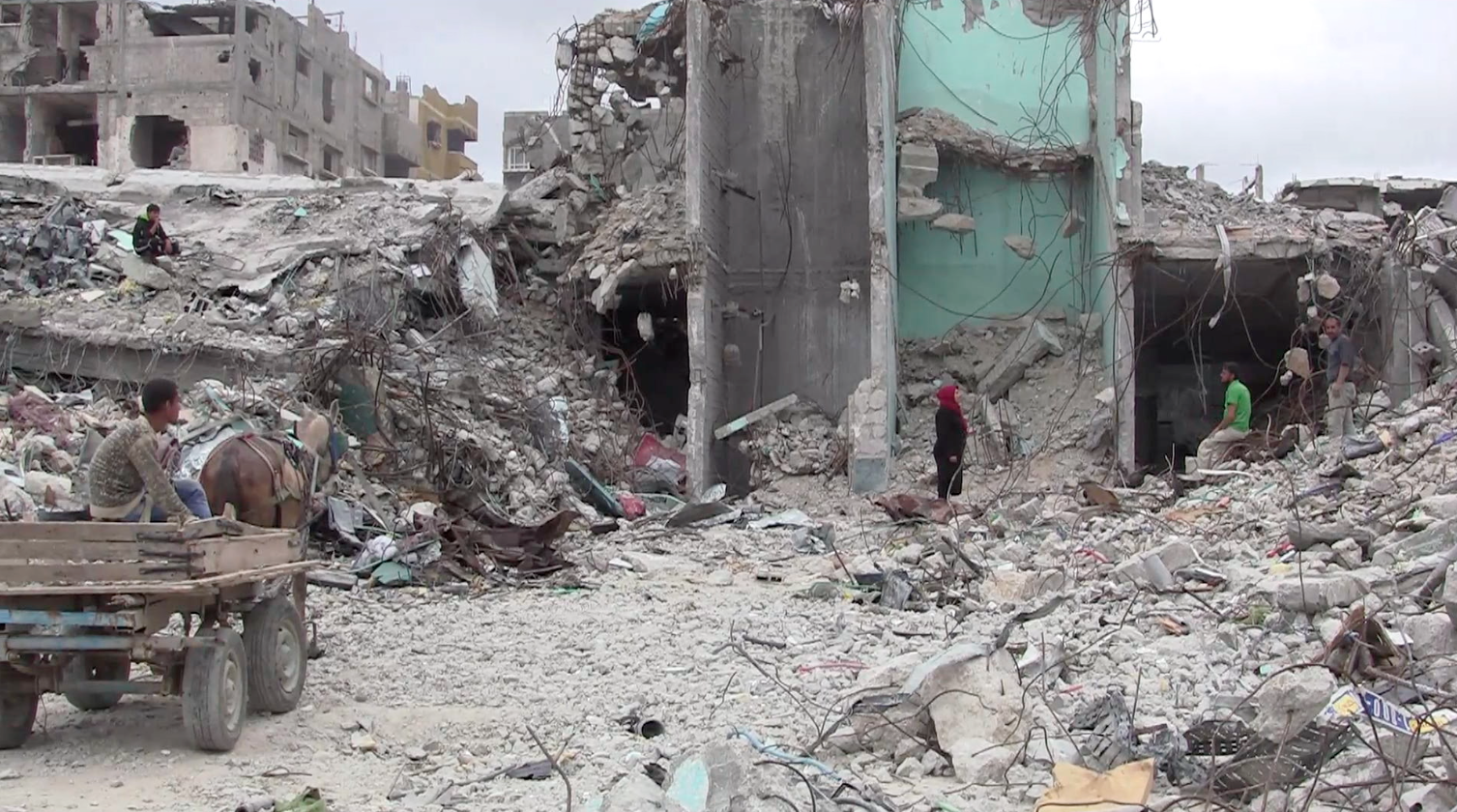 I crouched on the floor of the beat-up Mercedes yellow cab, so that I could film Yaser Abed Alkhafor at a better angle.  We were driving slowly through Khuza’a, a town near the southern Gaza Strip city of Khan Younes.

“We can see that the destruction in Khuza’a didn’t target only one place, but it is mass destruction targeting the whole area,” Alkhafor said, pointing to the destroyed homes lining the road.

Alkhafor, a field worker for the Palestinian Center for Human Rights (PCHR), narrated precisely what had occurred with each passing pile of rubble.

“Here the body of Ghadeer Abu Rujaila [a 17 year old disabled girl who was among dozens of civilians shelled while fleeing Khuza’a] stayed on her wheelchair. She was injured and left to bleed to death. She was left nearly an entire week here until a lull occurred on August 1st, and her family was able to retrieve her body.”

When Alkhafor entered Khuza’a on the first day of the lull in violence, “the smell of death was everywhere,” he recalled. Rescue workers had not yet been able to pick up the bodies strewn along the street.  “The sights we saw in Khuza’a, the magnitude of the destruction, was of a scale I had never witnessed in my 12 years of working in the human rights field,” he said.

Human rights in an Israeli prison

Jaber Wishah, deputy director of branch affairs at PCHR, underscored the philosophy and importance of their work as an effort to “document, monitor, and follow up on the violations perpetrated regardless of who the perpetrator is, the Israeli occupying force or Palestinian [authorities]… We aim to both promote and protect human rights and to deter perpetrators.”

Wishah entered the field of human rights by accident, while he served a 15-year sentence in an Israeli prison for militant activities. There, he had led a hunger strike, and developed boils due to an insufficient recovery process. He was taken for medical treatment with his legs shackled and hands cuffed behind his back, where he met an Israeli doctor who ordered him to pull down his trousers.

“How can I, doctor? I’m hand-cuffed from behind,” Wishah responded.

“That’s none of my business. Take off your trousers,” the doctor repeated.

An Israeli nurse intervened and tried to convince the doctor to order Wishah’s hand-cuffs removed.

“He’s a terrorist, he’s dangerous, and his hands will not be released,” the doctor retorted.

The nurse continued, “He was a terrorist, okay, but now he is a prisoner and a patient who is seeking treatment. Above all, he’s a human being.”

Wishah was amazed and profoundly moved. With two medical personnel, both Israeli, Jewish, and serving in the same Israeli prison service, he saw the difference when humanity was taken into account.

Knowing that the nurse insisted that Wishah be treated as a patient and as a human, Wishah decided to dedicate his life to defending human rights.

Sabreen Al-Tartor, an energetic young field worker for PCHR, has been monitoring human rights violations for nine years. During the assaults of 2008, 2012 and 2014, she went to the sites of attacks, filming and photographing the scene, recording the names and ages of the victims and taking eye-witness testimonies. Sabreen spoke to me in the devastated eastern Gaza City neighborhood of Shejaiya, a massive mound of rubble the backdrop to our interview.

“In each place I go, I am prone to shelling or missiles shot by the occupation forces, so I could be injured or killed at any moment,” Al-Tartor said. “I’m one of the first people to arrive to areas exposed to shelling. Sometimes I’m there before journalists, sometimes I come with the ambulances. I’ve gone to areas where the firemen were still extinguishing the fire and collecting remnants.”

Locations are often targeted more than once, which, she explains, further increase the danger of being a first-responder.

Al-Tartor was five months pregnant during the 2008-2009 assault.

When an air strike hit the Al Saraya area of Gaza city, Al-Tartor rushed to the scene to document. While photographing, F16 planes struck the area again.  “I forgot that I was pregnant, and threw the camera away and lay down on the ground.  I realized how a person behaves in the moment of fear,” she said, adding, “My humanitarian duties and work require me to be immediately in the place after it was attacked by the Israeli occupation forces in order to get the maximum amount of information, to collect shrapnel from the missiles. What did people say in the first moments? What did they see? They are very honest and speak spontaneously, because the incident happened minutes ago.”

Alkhafor left home early every morning during the 2014 war, having spent the previous night writing down the locations of shelling.  “I would go to the site of the attack, if it were not occupied by Israeli troops.  We would go there, even if that was very dangerous, to document what is happening and to confirm the veracity of what we had heard on the media.  Then we would go to the hospitals to get corroborating information from their records.”

Merely being in a car on the road made him a target, Alkhafor said. “But the very nature of our work requires that we go to the places that have been shelled.”

Wishah elaborated on the high level of risk his staffers faced, especially in the last war. “[They are asked] to inject hope and security into other victims while they are living the real danger around the clock…Ambulances were not safe.  Red Crescent premises and medical crews were not safe…no safety was secured on the roads. During this environment, field workers were the first to go, even sometimes before the Red Crescent crew…It’s only by a miracle that none of our fieldworkers have died up until now,” Wishah said.

Alkhafor believes that if the international community held Israel accountable when its military killed rescue workers, journalists, and other first-responders, it would provide some protection. Yet, “the world simply ignores these violations,” he said.

There are risks facing human rights defenders in Gaza from Palestinian sources as well. According to Alkhafor, PCHR staff members have been briefly detained or questioned by local Hamas authorities for documenting cases of political imprisonment.

Wishah spoke about the captivity of the Israeli soldier, Gilad Shalit, in Gaza.  “We published a statement saying that [Shalit] has the same right as any others in captivity to be in contact with his family and to receive the International Committee for the Red Cross.”  According to Wishah, this was not viewed as sufficiently nationalist to some groups in Gaza, and PCHR received threats that their office would be attacked. PCHR stood firmly behind their position, and the staff went to their offices the next day in spite of the threats.

The risks facing human rights defenders in Gaza are not only physical ones.

“In the last war, there was abnormal psychological pressure,” Al-Tartor said.  “Especially when I [documented the case of] a mother who was killed with her children.” When the mother was buried together with her children, Al-Tartor cried. “Honestly…more than one time,” she said, perhaps because she, too, is a mother with young daughters.

Al-Tartor recalled witnessing a woman pregnant with twins whose stomach had been blown open in a shelling; hiding behind a wall as missiles rained down on Shejaiya; seeing corpses littered around her. Watching a father running, holding his beheaded daughter in his arms. “I will never forget that,” she said, breaking down in tears.

Alkhafor spoke about Abu Jameh family, of whom twenty-four members were killed when their apartment building near Khan Younes was bombed by the Israeli air force. “Even the hospital had a hard time gathering all the names of the victims, since only one person from that entire family survived…These are events that stay with you.”

One of the bodies could not be found, so the family dug in the sand with their bare hands until equipment arrived, and eventually found their slain loved one, eight meters deep.  “The cries of pain of the victim’s brother…the crying was extremely heartbreaking.” The rawness of what Alkhafor repeatedly witnessed was difficult. He described living in another state during the war, shutting down normal emotions and functioning almost in a “almost a parallel reality,” he said.

PCHR organized a workshop with therapists for their field workers.  “It was immediately evident that we were suffering from severe PTSD, pain, anguish, rage and horror. We are still suffering from the trauma, but what alternatives do we have but to live with it? Our duty requires us to keep monitoring and documenting these events,” Alkhafor said. “We internalize the pain of people who lost a son, a father, a home.” Sometimes, he and his colleagues try to express what they experience to their families, whom he acknowledged was on the receiving end of their increased irritability and shortened fuses. But, often, “By ourselves, behind closed doors, we let it all out, the pain, the tears, because we want to appear strong in front of our families.”

When asked what motivates him to continue, Alkhafor spoke of his sense of identifying with his country, and identifying with the principle of the sanctity of human rights. He feels a moral, professional, and patriotic responsibility to do this work.  “Somebody has to raise these victims’ voices, broadcast their voices to the world, telling the world, ‘Look at the crimes committed here.’”

Wishah believes that, egregious as the human rights violations in Gaza are, they would be far worse if human rights organizations such as PCHR did not exist. And, according to Wishah, there are other, less tangible, reasons to continue the work. “Just your presence as a human rights defender beside the victim gives the victim hope that somebody cares about them. Somebody is following their case.”

Al-Tartor agrees. “I feel being with a family, listening to what they are saying, and listening to their children relieves part of the suffering,” she said. “I feel I share their suffering, and that is what pushes me to work.”

Jen Marlowe is the Communications Associate for Just Vision and an independent filmmaker, journalist, author, and human rights activist. She is the author of “The Hour of Sunlight: One Palestinian’s Journey from Prisoner to Peacemaker” and made the short award-winning film “One Family in Gaza.” Follow her on Twitter: @donkeysaddleorg