From the standpoint of joint Palestinian-Israeli struggle, this Friday’s ‘solidarity Sheikh Jarrah’ gathering in Tel Aviv raises important questions about the direction of the Sheikh Jarrah movement and especially the use of the term ‘solidarity’. The movement is moving to the center of Israeli political protest and away from the joint character of the struggle which has typified it for the past year. In what way is “solidarity” achieved by moving what is labeled as a ‘joint Palestinian-Israeli struggle’ to Tel Aviv, the most ethnically pure Jewish places in the country? Why is the protest not moved to Nablus, Beit Umar, Iraq Burin, Nil’in or even Jaffa? In West Bank villages, Israelis can come and show ‘solidarity’ while in Tel Aviv, travel for Palestinians is something of a problem to say the least. Having a protest in Tel Aviv is not in itself a bad development. The problematic here is the term ‘solidarity’ when the protest is not moved Palestinian villages and only to Israeli cities. In our conflict, solidarity must be expressed in the places of occupation by invitation of those which are occupied. 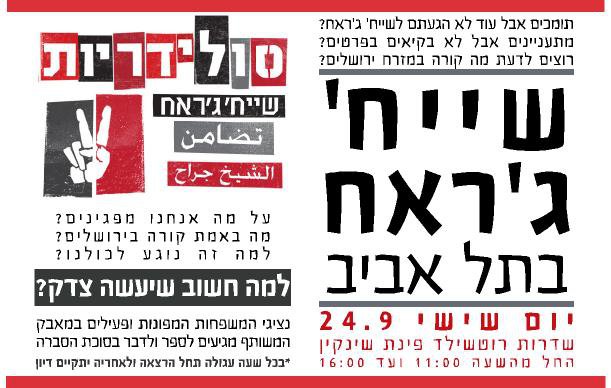 Flyer for the Sheikh Jarrah Solidarity gathering in Tel Aviv

The Sheikh Jarrah movement has become an Israeli demonstration which is using the term ‘solidarity’ for its own purposes of rallying new Israeli recruits. Again, this is not a bad development per se despite the obvious perversion of having an Israeli protest in the heart of occupied Palestinian land. Because of this perverse location, I think that Israelis are willing to show up in larger numbers complete with their own notions of cultural relativity. The psychological barriers that exist regarding entrance to the West Bank as a civilian are deep in the Israeli mind despite their relatively short period of gestation (even in the 1990’s Israelis were traveling in great numbers to the West Bank to hike and buy food, etc.). Thus, the effect of having a protest in Palestinian territory and even having some Palestinians involved provided a necessary spark to ignite something which could have been truly revolutionary in Israeli-Palestinian joint struggle. However, the desire to attract more Israelis has ultimately destroyed the joint Palestinian-Israeli element of movement. Protesting in Tel Aviv is the most profound manifestations of this sad development because of its isolation from Palestine and Palestinians.

Israelis have the unique position (read privilege) to support the popular non-violent struggle of Palestinians in the West Bank against the occupation, settlements and separation wall. Palestinians have extended an open hand to Israelis to join their struggle which takes place only one hour from Tel Aviv. Many Israelis have answered this call but it has only been a drop in the sea compared with the number of people that harbour ‘left’ opinions in Israel about the occupation and prospects for co-existence through grassroots work. Sheikh Jarrah had the opportunity to energize these people with ‘left’ opinions and lead them in the direction of genuine solidarity with Palestinians struggling against the crippling occupation. Yet, the movement has made the decision to focus energy on exhibiting ‘solidarity’ in places where Palestinians by and large can’t enter. It comes down to one’s definition of solidarity.