Martin Luther King’s name appears on the donors wall of Ayalon Canada Park in the Latrun area, which Israel conquered in 1967 before it carried out an ethnic cleansing of the area. The site of the donors wall includes many stone panels on walls that were erected on the ruins of the Palestinian village Imwas, which Israel flattened in 1967. Imwas is identified with Roman-Byzantine town Emmaus-Nicopolis; it is believed that Jesus met two of his disciples there after his resurrection (hence why numerous Christian organizations throughout the world are named Emmaus). A donor’s list at Ayalon Canada Park, including Martin Luther King Jr.’s name. The park is built atop the ruins of three Palestinian villages depopulated and destroyed in 1967.

Last January people around the world marked Martin Luther King Jr.’s 86th birthday. King was a fighter for human rights and against racism in the United States, who has become a international symbol and a source of inspiration for oppressed peoples throughout the world. He was awarded the Nobel Peace Prize in 1964 at age 35, and was murdered on April 4, 1968.

The Ayalon-Canada Park is an Israeli national park that was established in 1972 on the ruins of four Palestinian villages conquered by Israel during the 1967 war, expelling all their inhabitants, demolishing their homes, and preventing them from returning to their lands. To this day they are being prevented from returning. One village, Deir Ayyoub, was occupied in 1948, while three other villages in the Latrun area — Imwas, Yalu, and Bayt Nuba — were conquered in 1967. This area is formally part of the West Bank, but in practice it has been annexed to Israel. In addition to the park, which extends over 12,000 dunams, a section of Israel’s Highway No. 1 also passes through the occupied territory. And of course there are no signs explaining that drivers or visitors are crossing the Green Line.

Immediately after conquering the Latrun area without hardly any resistance, the Israeli army instructed the 6,000 or so residents of the three villages to come out of their homes and to gather in central squares. From there the army sent them – some on foot, some in cars, some on donkeys and some in trucks – in the direction of Ramallah, some 30 kilometers away. One of the refugees I interviewed remembered that the Israeli soldiers yelled at him in Arabic “Yalla to Ramallah, Yalla to Hussein!” This was a planned and organized act of ethnic cleansing. Not under pressure or shelling, not in the course of a battle, and not a mass flight of inhabitants; this was a systematic case of expulsion. When some 400 men, women, and children from Imwas found shelter inside the Latrun Monastery near their village, Israeli officers came to the monastery a few days later and instructed the priests to hand over the villagers of Imwas who were hiding there. They then loaded them on trucks and buses and banished them to Ramallah.

The war ended after six days with a crushing Israeli victory. The refugees of Imwas, Yalu and Bayt Nuba heard on the radio (as well as from a loudspeaker on an Israeli army jeep on the streets of Ramallah) that the refugees could return, and started walking toward their homes. To their amazement they were blocked by the army at the outskirts of their villages, where they were informed that they had nowhere to return to, and were sent back. During those hours Israeli bulldozers were busy demolishing their homes, erasing three villages from the face of the earth. 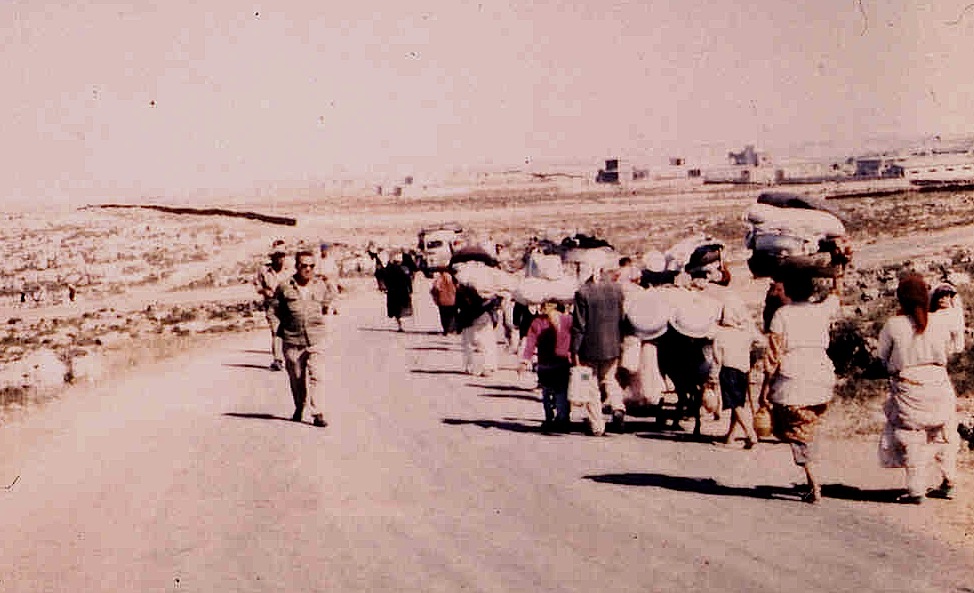 IDF soldiers expel the residents of Imwas from their village during the 1967 Six Day War. (photo: www.palestineremembered.com)

In the early seventies the JNF was allotted the territory of the villages in the Latrun area. It removed or concealed the ruins of the houses, planted pine and fir trees, expropriated the olive trees of the expelled Palestinians, established recreation areas for Israelis, installed playgrounds with swings and slides for the enjoyment of visitors to the park — some of them adjacent to the demolished and abandoned Palestinian cemeteries. This is a familiar practice that was used against hundreds of Palestinian villages that were conquered in 1948, forcibly emptied of their inhabitants, and demolished by the state. The colonial groves of the JNF are a means of concealing the traces of the crime, while the JNF signs are a means of shaping a collective consciousness free of any mention of Palestinian history.

Canada Park was the park’s first name, in honor of the contributions that Canadian Jewry and the Friends of the JNF in Canada made to its establishment. Hundreds of names of donors are inscribed on the walls that were built among the ruins of Imwas, and some of the fences in the compound were built with the stones of the demolished Palestinian houses. When one reads the names of the donors and of the places they live in, it indeed turns out that most of them are Canadian and that most of them are likely Jewish. Some are from other countries, such as the United States, for example, and some are Christians – like Martin Luther King. Several years ago the JNF changed the name to Ayalon Park – a biblical name that Israel gave to the Imwas Valley. Recently new signs have appeared in the park, with the double name – Ayalon Canada.

It appears that the struggles of the refugees from the village and of human rights groups against Canada Park and the JNF have borne some fruit. The fact that Canada’s name has become associated with a project in occupied territory — in violation of both Canadian law and international law — has caused the Canadian government some embarrassment, and has led to anger among some donors who were not aware that their names appeared in such a park. 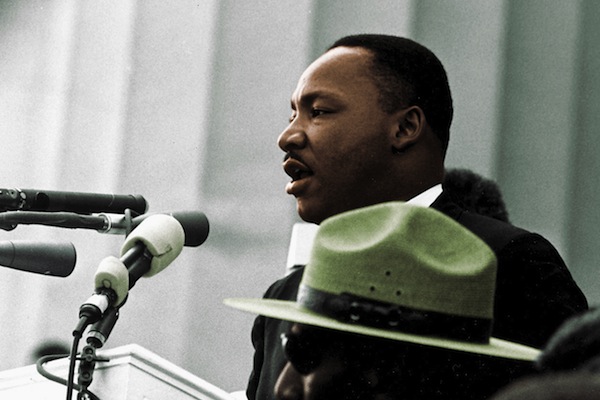 Martin Luther King Jr. delivers his ‘I Have a Dream Speech,’ Lincoln Memorial in Washington, D.C.

If that is the case, it would not be unfounded to suspect that the JNF has used Martin Luther King’s name for its colonial project without his or his family’s knowledge (he died several years before work in the park began). Nonetheless, the question of King’s relationship with the JNF remains valid: after all, the JNF has done similar things in hundreds of other depopulated villages. A donation to the JNF, however, does not fit in with the life story and principles of Martin Luther King Jr..

The refugees of Imwas, Yalu, and Bayt Nuba are today scattered across Palestine, Jordan and other countries. Every village has a non-profit organization that represents its refugees and continues struggling for their right to return to their land. Last January, close to Martin Luther King’s birthday, representatives of Imwas’ refugees were guests of the French Emmaüs to commemorate the ninth anniversary of the death of the organization’s founder, Abbé Pierre. The ceremony included a screening of the film “Emwas: Restoring Memories,” by Dima Abu-Ghoush, a Palestinian director and a refugee from Imwas, as well as the inauguration of the “Place du Village Emmaüs en Palestine” in the Emmaüs community village in the French town of Lescar-Pau. This humble act was undoubtedly a moral and symbolic achievement for the refugees.

On the other hand, the refugees of Imwas are stunned and disappointed that Martin Luther King Jr.’s name is inscribed among the ruins of their homes, decorating the list of donors who support one of the more racist institutions in Israel. It is an institution that plays a major role in the expropriation of their property, the perpetuation of their refugee status, and the prevention of their return. The JNF, which prides itself, so it seems, on the fact that Martin Luther King is among its donors, has in fact made him into an accessory to a crime.

Umar al Ghubari is group facilitator, a political educator, and is documenting and photographing the Palestinian Nakba. This article originally appeared in Hebrew on Haokets.