Interior Minister Eli Yishai has said that he would make the lives of African refugees ‘so miserable that they would want to leave.’  The recent lynching and firebombing against Palestinians prove to me that it is statements like these that instigate violence within Israeli society against minorities. 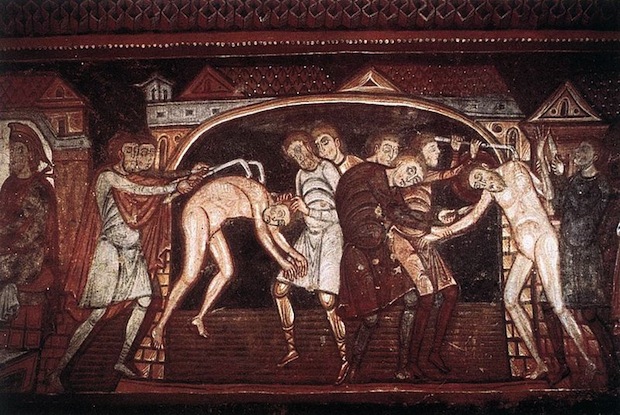 Interior Minister Eli Yishai has said (Hebrew) that he wants to make the lives of African refugees miserable.  As Israel’s Minister of Interior, he is responsible not only for Israeli citizens, but everyone else in the country: tourists, permanent residents, migrant workers and illegal residents. Anyone who makes the lives of those over whom they have power miserable is not exactly a minister but some sort of a Gargamel.

Making people’s lives miserable is not an invention of Minister Yishai. After all, it has been Israeli policy for many years. Take the case of Hebron: In the ’90s, when the H2 area was defined as being under the exclusive control of the IDF, there were 30,000 Palestinians living there. Israel decided to make their lives impossible in order to induce them to move to the nearby  H1 region (under Palestinian Authority control.) The IDF closed their shops and welded their shutters. The settlers were given free reign to beat up Palestinian children. Those Palestinians were forbidden from walking in certain streets and driving on any of them. Eventually many of them did leave. You can’t live like that.

I wanted to write that the (in)voluntary transfer policy is not limited to Hebron, and that it is always a transfer resulting from violence, cruelty and oppression. I wanted to remind people that the Palestinian denizens of East Jerusalem are not citizens but have the status of “residents.” According to Israeli policy, if any of them move out of Jerusalem, they risk losing residency and cannot return and live there again. Palestinians in East Jerusalem suffer from severe discrimination by the authorities: construction is banned, arbitrary arrests and police brutality are commonplace. Israel makes the lives of residents there miserable, in the hopes they will leave. Once they leave, it locks the door behind them.

I wanted to write about all this, but I can’t, because we had an attempted lynching and a firebomb attack. Both were carried out by Israeli Jews like me. On Thursday night a Molotov cocktail was thrown at a Palestinian taxi near the settlement of Bat Ayin. Later that night, Jewish youths attacked three Palestinian youngsters in downtown Jerusalem’s Zion Square, wounding one of them critically.

How can you breathe or write in a country where such events occur? It’s difficult, particularly when one senses that such events do not materialize in a spontaneous way from the mob.  History shows that racist and nationalist violence invariably flows from a climate generated by political and religious leaders.  Such arrogant racist leaders like Eli Yishai feel empowered by this hate.

Maybe it’s time to link the two issues and focus on the connection, so we can understand what sort of country we live in and why is it so. Popular violence against Palestinians in the West Bank and Jerusalem is closely related to violence against refugees in Tel Aviv and Eilat. And it is also very similar. Recently refugees have also suffered mob attacks and had Molotov cocktails hurled at them. Once we bundle together these violent events, then the third element of institutional violence needs to be added: IDF violence against Palestinians and violence against asylum seekers by the Interior Ministry’s Oz Unit, which are similar. Raids to arrest children take place nightly both in West Bank villages and in Israel itself where it is a first step on the way to deportation.

None of the acts of violence listed above, whether inflicted by the state or the mob – whether directed at Palestinians or refugees are exactly a masterpiece of originality. All these acts reflect a moral degeneration by those who have become inured and who carry out patently illegal orders. Sometimes the command is given by a rabbi, sometimes by a parent, sometimes by a charismatic friend and sometimes by the force commander, who is also carrying out an order given to him from high above at the most senior political levels. It is those high above  who want us to hate, beat up and banish. They want us to revert to a tribal identity and forget about mutual respect for human beings.  They want us to make each other’s lives miserable.  They say so explicitly.

Yes, Eli Yishai’s comment is also an order, an order to destroy, hurt, cause suffering — to elbow people in the forehead and leave them bleeding. It’s an indirect order. Yishai does not say: make their lives miserable. He says: I, the minister, would like to make their lives miserable. Thus he creates legitimacy for terrible behavior that will continue to spread. Thanks to him and others like him we will continue to degenerate. That is, unless we decide not to follow his instructions, but from elsewhere like the Mishna [oral Jewish law]. There it says: “In a place where there are no men, strive to be a man.” It means – keep your own humanity even if everyone else has lost theirs. And what is humanity? Five even more ancient words that seem to have been forgotten: “Love thy neighbor as thyself.”

This post was originally published on Mako.co.il, and translated by Sol Solbe of the Middle East News Service, Melbourne, Australia.