It is a shameful lie to make opposition to 47-year military rule an issue of supporters or traitors of Israel. 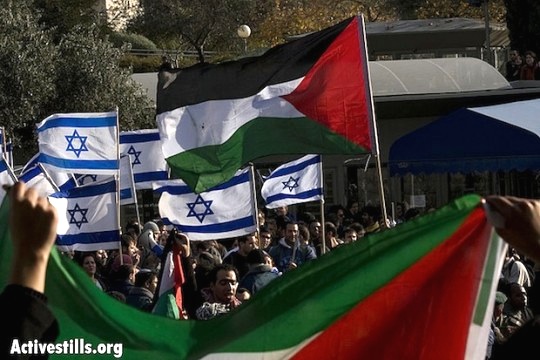 The war in Gaza yielded a large crop of articles about Liberal Zionism. Suddenly numerous authors felt an urgent need to reject, redefine, defend or deconstruct a term that the vast majority of Israelis have never heard of.

However, Israelis are familiar with the same basic concept, except they call it the “Zionist Left,” or national left. They embrace the label “Zionism,” but unlike diaspora-based writers, don’t spend too much time trying to define it.  I can’t recall anything like the floodtide of English LibZi articles in the Hebrew press any time recently.

That doesn’t bother me; as I’ve written, the term Zionism in Israel today has become a shell gutted of meaning, intended primarily to delegimize anyone who is not one. Finance Minister Yair Lapid took this to new heights when, in reacting to a kerfuffle this week over the cost of Israel’s beloved junk-food chocolate pudding – labeled those who sparked the protest “post-Zionists” and “anti-Zionists.” He was reacting to the (literal? figurative?) name of their Facebook group “Move [lit., ‘make aliyah’ – ds] to Berlin!” where the price of a similar product is lower. I wonder if the authors of the English LibZi articles are aware of this particular iteration of the concept in modern Israel as they search their Zionist identities?

Therefore, what I find more troubling is not the meaning Zionism, but the lack of clarity about what it means to be on the left in Israel.

What do Israelis mean when they talk about the “Left”?

In a lengthy Haaretz feature article about the less-savory aspects of Yitzhak (Bougie) Herzog’s political past, I noticed that Israel’s opposition leader was quoted discussing the constellation within Israel that supported Ehud Barak in the 1999 elections:  “This camp, the peace camp, which today they like to call Left…”

Whatever he was implying, I’ll take that as a step in the right direction. At least the person who is supposed to offer an alternative makes a rhetorical link between the Left and peace.

Otherwise, standing on a sidewalk in any given Israeli town, one might not know what many self-described left-wingers do stand for. Although about 15-16 percent of Jews describe themselves as left wing in surveys, the vast majority of Israelis supported the latest war in Gaza. At the height of the ground operation, only seven percent of the public (in a sample that included Arabs) supported a full ceasefire. Since the self-defined left is roughly 20 percent of the who Israeli public (not just Jews), apparently many of that group supported the war.

So how is the mainstream Zionist “Left” distinguished from the rest of Israel? This group commonly cites attitudes toward the conflict: support for a two-state solution, support dismantling West Bank settlements, and they say they would divide Jerusalem for the sake of peace.

But my general observation is that while many of them would dismantle outposts populated by wild-eyed settlers who beat Palestinians or burn their property, they are not prepared to touch Ariel, for example, if a two-state solution was riding on it.

Few are prepared to hear about compromises on the Palestinian refugee problem.

Some would consider dividing Jerusalem, but who wants to uproot over 200,000 Jews living in East Jerusalem now, many of whom dug in over the last 15 years?

Well, the Zionist Left would respond, we were out of power from the time Ariel Sharon became prime minister in 2001. We are against the huge settler population growth since then, but it wasn’t up to us.

But it doesn’t take much to know that Labor governments and ministers oversaw robust settlement expansion during their terms as well.

Those are the mistakes of political elites, says the self-defined mainstream Left. We did our part by voting. Anyway, the real reason that there’s no peace is that there is no partner. Barak and Olmert tried and the Palestinians responded with violence. Mainstream leftists repeat this many times a day, and conclude: we’ll just have to wait until the conditions are ripe, sometime in the future.

In frustration, some of them decide to take action. They say, blaming the Palestinians for all failures can’t be right – when in between rare genuine negotiation attempts, Israel perpetually expands its hold over Palestinian life and land. These people see the narrative of the mainstream Zionist Left as an excuse to do little; this subgroup wishes to break from sluggish defeatism and take action.

Four years ago, that subgroup joined others outraged after Cast Lead and contributed to a new wave of left-wing activity. The Right began frantically de-legitimizing such activists, calling them a bastardized version of the word “left.” Since that time, the Zionist Left became legitimate, the others were mukאsa, unkosher. Traitors who abandoned Israel. Post-Zionists and anti-Zionists.

Here again the label of Zionism is a red herring. It is a shameful lie to make opposition to 47-year military rule an issue of supporters or traitors of Israel.

The distinction I see is between the passive and active Left. Here is what Israelis mean when they talk about Left.

The passive Left uses the term Zionism as a litmus test for who’s acceptable. Although distinct from centrists by self-definition, their votes break down anywhere on the range from Kadima, Lapid, Livni, Labor or Meretz. Its members read Haaretz, cancel their subscription in wartime, and some revive it again later.  To be clear: those parties may also be supported by centrists or the activist Left; other kinds of people read Haaretz, too. I am broadly characterizing the group under question, not the newspaper readers.

The passive Left frequently recalls the glory days of 1992 when Labor and Meretz were in government under Rabin, sighing for the great liberal values that dominated the country and longing for the Left (in their view, the parties above) to regain electoral power. The romanticization of a less-than liberal past carries blunt overtones of Ashkenazi elitism.

Many are ordinary citizens: when there was peace, they were for peace, when there is war, they went (with apologies to Auden).

The activist Left is either post-, non-, anti-, crypto-, indifferent or agnostic Zionist; some may still cherish it as an identity but struggle and question whether the label is worth the grave policies committed in its name.

Some have served extensively in the army and now question it. Some always felt themselves to be outside the mainstream Israeli justifications for the conflict.

What unites them is the shared sense that I, personally, can’t be part of this. Doing nothing is what allowed the number of settlers to nearly double in the last 15 years; entrench Israel’s military rule over 60 percent of the West Bank (Area C), keep Gaza imprisoned, tear the two societies apart and never mind acquiescing to injustices inside the Green Line.

So they take action: they protest in Israel and sometimes in the West Bank, write articles, make films, establish magazines (not only ours), join human rights organizations, create new social initiatives, think about different models for political resolution beyond the classic two-state solution that seems impossible now, cultivate relations with Palestinians and spend time in the West Bank so at least they can’t be accused of not knowing.

When none of that works, those who feel they contribute directly to military control over Palestinians can refuse. Some reject reserve duty, even during war time.

Israeli society – and often, the passive Left – dismisses them as crazed radicals (“just like the radical Right” is a common refrain) while embracing legitimate causes: the Milkie-pudding struggle. The power of citizens is amazing: a few days of internet noise and two large supermarket chains dropped the cost of the crap to one shekel or less. Three years ago, half a million Israelis took to the streets to lower housing costs. They consciously rejected addressing the conflict, Israel re-elected Netanyahu and brought in hollow centrist Yair Lapid as the change guy. Rejection from the mainstream? We’re used to that.

But still, nothing has worked and frustration drives the search for new approaches. If the idea grows among the activist Left that every Israeli must accept responsibility for the occupation, it will lead naturally to thoughts about civil resistance for all (among that group), not just soldiers.

Will it be a tax rebellion? Israelis calling for boycott? If civilians break the law, are they prepared to go to jail? Am I?

I’ll be very honest: I don’t know the answers. There is always the other option: the Israeli activist Left could fade back into the passive Left scenery.