Towibah Mjdoob is researching how some Palestinians live within entirely Jewish surroundings, how the conflict between the two nations comes into play in their day-to-day lives. But very quickly, Mjdoob realizes that she has become the subject of her own research. 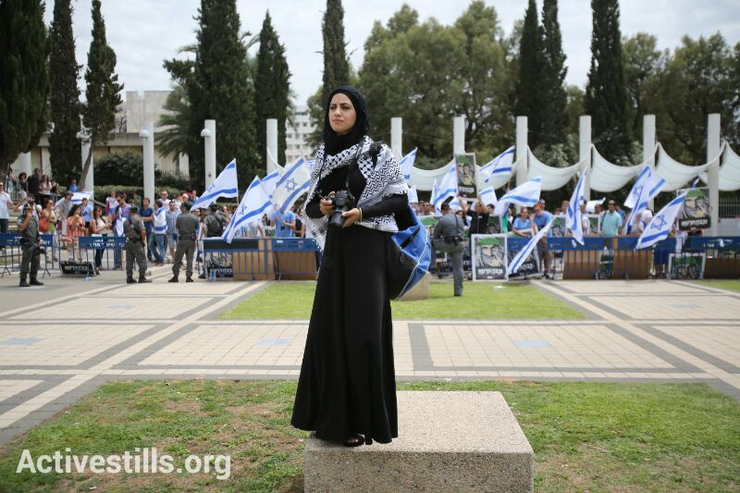 A nearby voice says to me: “Good morning Hagit.” I had just locked the door to my apartment and was heading out for a long day at the university. I turn around to see who, aside from myself, was in the garden. I didn’t see anybody. It was just me and the landlord’s mother standing there. She looks at me and repeats, “Hagit, do you want some Arabic coffee?”

I oblige and correct her, “my name is Towibah, not Hagit.” The landlord’s mother pours a cup of coffee into a special mug, hands it to me and ignores my name. “This mango tree, we should have trimmed it in the beginning of the spring. It needs a special spray. I need to ask one of the Arab gardeners who come to the neighbors and ask about that spray.” I am reminded of my father and his mango tree. The words “one of the Arabs” prevent me from giving advice regarding the landlord’s mother’s tree.

I lived 15 minutes away from Bar-Ilan University, but I was always the last to arrive in class. Something within me caused me to be late, and when I arrived, I would always sit at the end of the last row. My chronic tardiness and choice to sit on the side were not my regular behavioral patterns. But even in my favorite class, which dealt with stereotypes and prejudices, I would arrive late. This time, however, there was no room left on the side or in the last row, so I was forced to take one of the two empty seats in the middle of the class.

How are stereotypes formed? How can we get rid of them? How do we prevent ourselves from thinking in a stereotypical manner? The lecturer divided the board into columns: Ashkenazim, Mizrahim, Druze, Russians, Arabs, Bedouin and a few others. Some of the columns were divided into subgroups: Yemenites, Iraqis, etc. The class was asked to list all the stereotypes of each group. I didn’t agree with the division between Druze, Arabs and Bedouin, but I decided not to bring it up during class.

The students, who were getting their master’s degree in social psychology, began listing all the stereotypes. Most of the ones they named weren’t negative, except when it came to Arabs. “Murderers,” “terrorists,” “sexually deviant,” “oppress women,” “they all wear veils,” “not intelligent.” At times you could even hear people laughing. No one even dared to think that a Palestinian student was sitting in the middle of the class. Only the lecturer knew. With every stereotype that was shouted out she looked at me apologetically, which didn’t make me feel any better. “We need to deal with the subject of Arab stereotypes in Israeli society, since it is related to the Israeli-Palestinian conflict,” she said. I could not continue to take part in this lesson. I went outside. I was the only Palestinian in the entire department that year.

In the apartment, the landlord’s mother is sitting on the balcony, smoking a cigarette and listening to the music of Nazem El Ghazali, one of my and the landlord’s mother’s favorite Iraqi singers. During my three years of studies, I heard him, through her, in the morning and early evening hours. For three years, the landlord’s mother refused to believe that I was Arab, and chose to treat me as if I were a Jew named Hagit. “Hagit, you should join us for Passover… it’s too bad that you didn’t go back to your family for the holiday!” “Hagit, may you be written in the book of life!” (a common Jewish saying during the High Holidays), “happy Independence Day to you and the people of Israel!” “Hagit, where did you learn Arabic?”

“This is the hundredth time I’ve explained to her that I am not Hagit!” I tell her son. “She doesn’t know that I’m Palestinian? Why doesn’t she want to believe that I am an Arab?!” The son smiles. “I never actually told her. In my eyes, it doesn’t matter which group you belong to. The only thing that matters is that you are a human being. I wish all the Jews and Arabs could be like you!”

For my master’s thesis, I decided to research how Palestinians live within entirely Jewish surroundings. How do the cultural and national differences, as well as the conflict between the two nations come into play in these individuals’ day-to-day lives? What happens to their identity vis-a-vis the Jewish majority? How do they present themselves? Do they emphasize their Arabness or do they play it down? How do they identify? Which aspects of their identity do they choose to emphasize? How do they respond to discrimination? To stereotypes? Do they allow themselves to relate to our history as Palestinians in Israel, or do they ignore it completely in order to be part of Israeli society?

Most of these questions are taken for granted by the Arab minority while the Jewish majority is not even conscious of them. One interviewee, a 26-year-old who works for a Zionist research institute, told me: “I am totally unsure when it comes to definitions. The only thing I know for sure is that I am Arab and nothing more. I am not Jewish, not Israeli and not Palestinian.

“I am Israeli and there is no escaping it. But do I feel like I belong? Not at all!” said a Palestinian hi-tech worker. “Today, even the ability to hold onto this illusion no longer exists.”

I interviewed Palestinian professionals (men and women, Muslims and Christians, of different ages) who work in Jewish organizations and live in either Jerusalem or Tel Aviv. I learned that the choice – if it is indeed a choice – to work for a Jewish organization comes at a price for the Arab professional. This is expressed by silence and silencing, a perpetual refrain from sharing political positions or open criticism, lack of legitimacy to express protest, self-censorship and experiencing frustration and hopelessness of lack of control and an ability to change the present situation.

The situations and responses varied: female Palestinian professionals tended to respond to racism, whether immediately or some time after a specific incident. They believed that with attention and a proper explanation, they could change their surroundings. The men, however, receded in the face of racism, either through denial or by ignoring the racism.

Furthermore, the women emphasized their Palestinian and gender identity. “First of all, I am a woman,” was a common response. Some of them were under pressure from family members to return from the Jewish city to their home in the periphery, where they grew up. These women’s struggle is two-fold: with the men in their families (fathers, brothers), and with the Jewish surroundings in which they work.

Each of the women I interviewed, without exception, has been told “wow, you don’t look like an Arab,” a phrase which carries with it a world of prejudice and stereotypes. “I don’t understand what they expect, that I come to work with a tent and a camel?” asked one of the interviewees, who is the sole Arab woman in a Jewish organization. Many interviewees either asked me to turn off the tape recorder or not include the specific racist incidents they experienced while working for the organizations.

Arab service workers, be they hospital nurses, speech therapists or lawyers, reported many cases in which those receiving their services cast doubt on the workers’ professionalism or refused to be served by them. The specific cases in which they were able to change the minds of Jews filled the workers with pride, although the recurring experience of rejection wore them out and even caused them to want to quit their jobs. “Sometimes, the university brings us donors from outside Israel and invites me to sit and speak with them about the situation of Arabs in Israel,” said one of the male interviewees who lectures at a large university. “I feel like I am the property of the university.”

Despite it all, many Arab professionals choose to work in Jewish organizations for economic reasons, and for lack of alternatives. Their professional lives are accompanied by a personal, continuous reflex. In conversations they have among themselves, they examine their identities and feelings: ambivalence, reduction of visibility, frustration and distancing themselves from other Palestinian colleagues. And here is an interesting finding: Palestinians working in NGOs for social change experienced more discrimination and growing frustration than those who worked in the private sector.

When I waited for my family to arrive from the North for my graduation ceremony, the interviewees that I had met suddenly became mixed up with my own three years at Bar-Ilan, leaving me to wonder how I survived. I spoke with one of the students that sat next to me – whose name happened to be Hagit – happy and excited to be finishing my studies. At the end of the ceremony, the national anthem was played. “A Jewish soul still yearns,” Hagit sang, while my brother and I remained silent, unable to sing words that weren’t written about us.

Towibah Mjdoob is a Community Organizer at Kayan, a feminist organization for the advancement of Palestinian Women in Israel. She has recently submitted her thesis at Bar-Ilan University.
Get Our Weekly Newsletter
Since you’re here…