A major Israeli university revokes a prize intended for Breaking the Silence claiming that its work opposing the occupation ‘isn’t in the national consensus.’ What does that say about Israel as a nation? 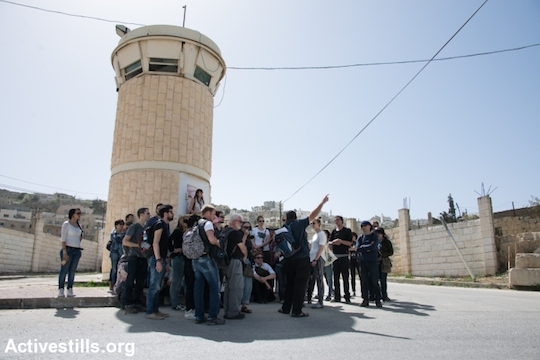 A Breaking the Silence tour in the Israeli-occupied part of the West Bank city of Hebron, March 7, 2014. (Photo: Ryan Rodrick Beiler/Activestills.org)

Breaking the Silence, an organization of former IDF soldiers who oppose Israel’s occupation of the Palestinians, was supposed to receive the Berelson Prize for Jewish-Arab Understanding from Ben-Gurion University this week, a NIS 20,000 ($5,100) award that the university’s Middle East studies department has given out annually for a quarter century.

However, university president Professor Rivka Carmi decided to overrule the decision and vetoed Breaking the Silence’s award. The reason the university cited is that the organization, which publishes testimonies of soldiers about their military service in the occupied territories, is “an organization that isn’t in the national consensus, and giving it the prize is liable to be interpreted as an appearance of political bias.”

As Haaretz pointed out, recipients of the prize in years past have “include[d] Egyptian playwright Ali Salem; Palestinian poet in Israel, Siham Daoud; the Parents Circle – Families Forum, an organization of bereaved Israeli and Palestinian families; Physicians for Human Rights; a bilingual school in the Galilee; Sikkuy – the Association for the Advancement of Civic Equality; and the Andalus publishing house.” Considering this list, Breaking the Silence does not constitute much more “political bias” than most of the others.

Carmi’s move to deliberately go out of her way and revoke the prize is rare and noteworthy, especially because she is thought of as a liberal and an advocate of academic freedom who has taken the Right to task for opposing those values. This is the same university and the same president who have been the targets of attacks by far-right-wing group Im Tirtzu, which in 2010 threatened to encourage donor boycotts of the university over what it deemed the “anti-Zionist tilt” of its politics and government department.

At the time, Carmi came out resolutely against Im Tirzu, becoming a prominent voice in Israel advocating for academic freedom. In a 2013 oped she wrote, “a strong Israel is one where everyone’s opinion can be heard without fear, if only to help us learn to articulate why we don’t agree.” This is also the same university that is home to professors like Oren Yitachel and Neve Gordon, whose work inside and outside the classroom highlights Israeli human rights violations and directly opposes Israeli occupation. Gordon has even come out in support of an international boycott of Israel.

Surely Carmi is concerned about maintaining and growing the university’s donor base, and trying to strike a balance between academic freedom and academic survival in an increasingly intolerant and illiberal climate. These days, granting a prize to Breaking the Silence is tantamount to treason and a provocation garnering unwanted attention.

Last May, for example, a prominent British donor and university board member, Michael Gross, withheld a $1 million donation because Breaking the Silence had been invited to participate on a panel at the university. A majority of the institution’s donors are center-right or right wing, according to a professor at the university who asked not to be named. Moreover, the professor told +972 Magazine that the university administration discourages professors from criticizing the occupation and the government, and there is an official policy that professors who write opeds cannot list Ben-Gurion University as their employer when doing so. However, the professor added, there were no known donor threats against the university for granting the prize to Breaking the Silence.

When the Israeli military accredited a college in the West Bank settlement of Ariel as Israel’s eighth university in 2012, Carmi headed the Council of Presidents of Israeli Universities, which opposed the move at the time. However, once Ariel officially became a university and a group of Israeli academics called for a boycott of the institution, Carmi came out vehemently against boycott in any shape or form:

She appears to have shot herself in the foot with the decision to cancel the prize to Breaking the Silence. It not only undermines the academic independence and freedom of the university, setting a dangerous precedent for further restrictions and the silencing of those who oppose Israeli policies, but it also is constitutes an effective boycott of Breaking the Silence, something she has categorically rejected. Carmi has — perhaps unintentionally — boosted the legitimacy of boycotts in general as a tool, and academic boycott in particular, by endorsing it herself in order to keep her institution afloat.

I point all this out not as an indictment against Carmi, although she is indeed responsible for this horrendous decision, which sets a precedent for the further silencing of critics inside and outside academia. This decision is especially significant because of the identity of the person putting Breaking the Silence in her cross-hairs this time around. Surely it is not surprising when right-wing politicians, settlers or advocacy groups attack, slander or delegitimize Breaking the Silence, but the president of a university that stands for academic freedom and independent thought?

This is a marker of just how bad things have become. When Carmi decides that Breaking the Silence is outside the national consensus, she is making the decision to stand with the silencers, with the oppressors. As human rights attorney Michael Sfard (who is also Breaking the Silence’s legal advisor) wrote one his Facebook page in response to her decision: by appeasing the forces in the Israeli “consensus” that deny the entire Palestinian people their rights, you too assume responsiblity for the occupation. “One must make a choice today,” he wrote. “Either you are with the democrats or you are with the fascists.”

All this demonstrates that even those Israelis who are educated, who advocate for civil liberties and highlight the importance of free speech, who are against settlements and against the occupation, who support a two-state solution, who believe in human rights, and who may even identify as “left” — even they can be part of the problem, part of the “consensus,” part of the status quo that preserves and perpetuates injustices, and civil and human rights violations.